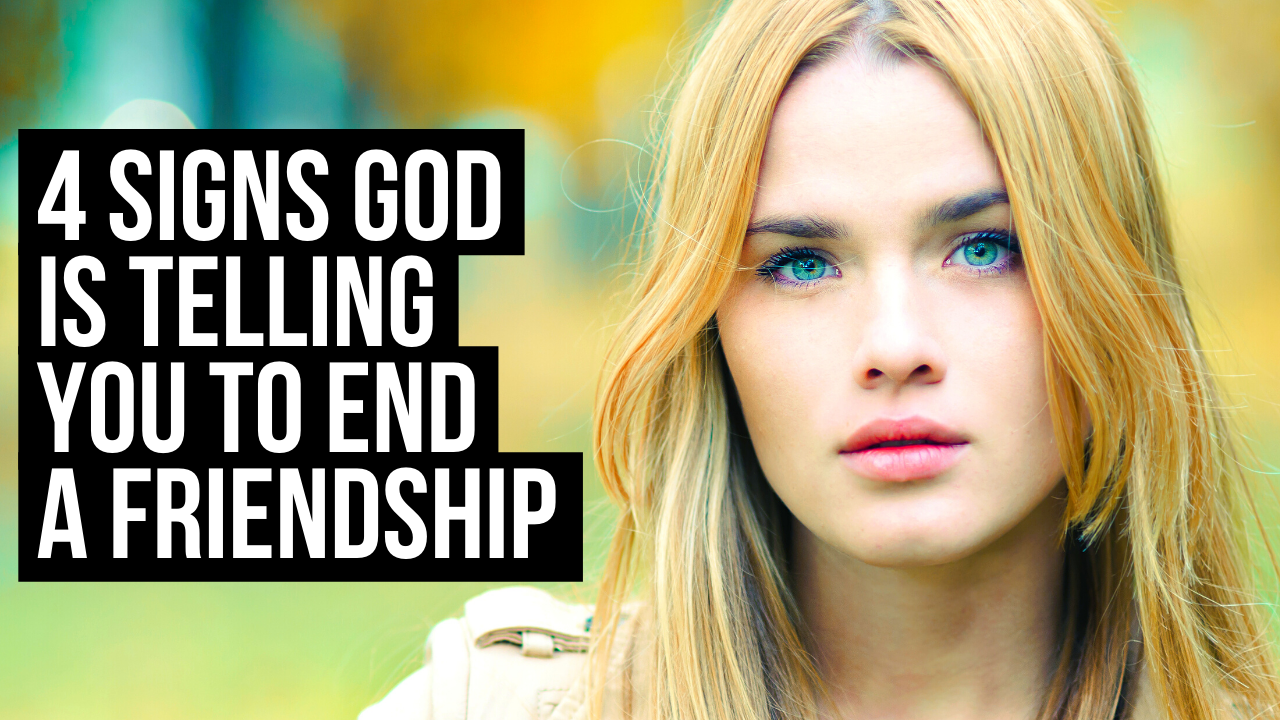 If God does lead you to end a friendship, this does not mean you now need to be enemies with this person. Sometimes a friendship needs to end gradually by simply hanging out with this person less because God wants you to put your energy somewhere else. At other times God will tell you to abruptly cut this person out of your life because you’ve already tried to talk about the issues in the friendship but this person is not listening and is toxic to be around.

I say all that because in this article I’m not going to be covering how you should end a friendship. Each type of friendship is different; some are serious because you’ve known someone a longtime and some are not because you just started hanging out. Pray for wisdom on how to lovingly end a friendship while also protecting your own heart as Proverbs 4:23 commands.

With that said, here are 4 common signs God will give you when he wants you to end a friendship.

As the common saying goes, “Show me your friends and I’ll show you your future.” It’s really true. We become like those we spend time with. This is why in Proverbs 13:20 it states, “Whoever walks with the wise becomes wise, but the companion of fools will suffer harm.” Notice how this verse looks forward to the future affect your friends have on you (“become wise” and “will suffer”).

Whenever we are not moving forward with the Lord, we are not just standing still. We are actually going backwards. The really dangerous thing about this is that we move backwards so slowly it can be hard to notice. But if you keep hanging out with friends that are preventing forward movement, you will wake up one day and be shocked at how far back you have rolled without even knowing it.

Notice the principle of progressiveness that is found in Romans 6:19, “For just as you once presented your members as slaves to impurity and to lawlessness leading to more lawlessness, so now present your members as slaves to righteousness leading to sanctification.” One way or the other we are always moving and never standing still. Sin will either take hold and produce more sin or we will follow Christ which will lead to more holiness.

Therefore we must obey what 2 Timothy 2:22 commands, “So flee youthful passions and pursue righteousness, faith, love, and peace, along with those who call on the Lord from a pure heart.” Notice we are called to two actions, fleeing and pursuing. You need to flee those friendships that are preventing growth and pursue those friendships that help you seek the Lord with a pure heart.

2. If This Person Has Wronged You in a Way that Has Completely Broken Your Trust or Has Shown a Pattern of Lying to You, This Is Often a Sign God Wants You to End This Friendship

As I’ve talked about before, there is a big difference between forgiveness and reconciliation. Forgiveness is when you allow Christ to pay the spiritual debt of the wrongs against you. Reconciliation is when the relationship is restored to what it was before the offense took place. Forgiveness is a commandment all Christians must follow, for as Jesus said in Matthew 6:14-15, “For if you forgive others their trespasses, your heavenly Father will also forgive you, but if you do not forgive others their trespasses, neither will your Father forgive your trespasses.”

Whenever possible we should also seek reconciliation, but it’s not always possible to reconcile and God does not command us to always reconcile like he commands us to always forgive. God made relationships to be built on trust. Certainly none of us are perfect and we all need grace, but if someone is untrustworthy it is impossible to have a good friendship with them.

So if God has shown you a big betrayal by this person or he has shown you a consistent pattern of lies by this friend, oftentimes this means God is leading you to end this friendship so you can guard your heart. As Proverbs 14:7 says, “Leave the presence of a fool, for there you do not meet words of knowledge.” Proverbs 17:9 also states, “Whoever covers an offense seeks love, but he who repeats a matter separates close friends.”

3. If This Friendship Is with Someone of the Opposite Sex and One of You Wants Something More But the Other Person Does Not, This Is Often a Sign God Does Want You to End This Friendship

Notice what Paul says to the younger man Timothy in 1 Timothy 5:1-2, “Do not rebuke an older man but encourage him as you would a father, younger men as brothers, older women as mothers, younger women as sisters, in all purity.”

It’s interesting to me that only after “younger women” does Paul add on an extra word when instructing young Timothy. He mentions encouraging older men as fathers, younger men as brothers, and older women as mothers. But when it comes to younger women, women who are single and around his age, Paul says he should treat them as sisters “in all purity.”

It seems here that Paul is recognizing the extra care that should take place between Christian singles of the opposite sex where there could be a natural romantic interaction. Timothy’s relationship with older men, younger men, and older women is slightly different than his relationship with younger women because naturally single women and single men often create bonds that go beyond the relationships they can have with other types of people.

I believe Christian singles should have friends from the opposite sex and I’m not even against them having close friends of the opposite sex. However, I do believe that in almost every case where there is a close friendship between a single man and single woman, one or both of them have feelings for the other. I’m not saying that’s bad. I think that is good actually because many healthy relationships come out of good friendships. But I think future romance should actually be a goal of a close friendship between a man and woman because otherwise I believe one of them is going to be led on.

I believe problems arise when one person likes the other person but the feelings are not mutual and then these two friends just keep the friendship the same as it has always been. I believe this is unloving by the person who does not like the other person and unwise of the person with the feelings. I say that because what almost always happens is that eventually the other person starts dating someone they do like and then the friend is pushed to the sidelines anyways. It seems selfish to me to use a friendship while it’s convenient and then push that friend aside once you no longer need it to fill your emotional tank while you are waiting for a real relationship.

So this is why I believe close male to female friendships are not built to last and should transition into dating or be dialed back to not such a close friendship. I don’t think this scenario always happens between Christian single friends, but when they are considered close friends or best friends I do believe this is the norm.

For much more on this, here’s a playlist of related videos I’ve done on the Pros and Cons to Male and Female Friendships for Christian Singles.

You always have to put your relationship with God above everything else, including your friendships. If a friendship is detracting from your walk with God rather than adding to it, it’s time to end that friendship.

As Jesus said in Matthew 5:30, “And if your right hand causes you to sin, cut it off and throw it away. For it is better that you lose one of your members than that your whole body go into hell.” It’s better to lose a friend than to lose your closeness with God.