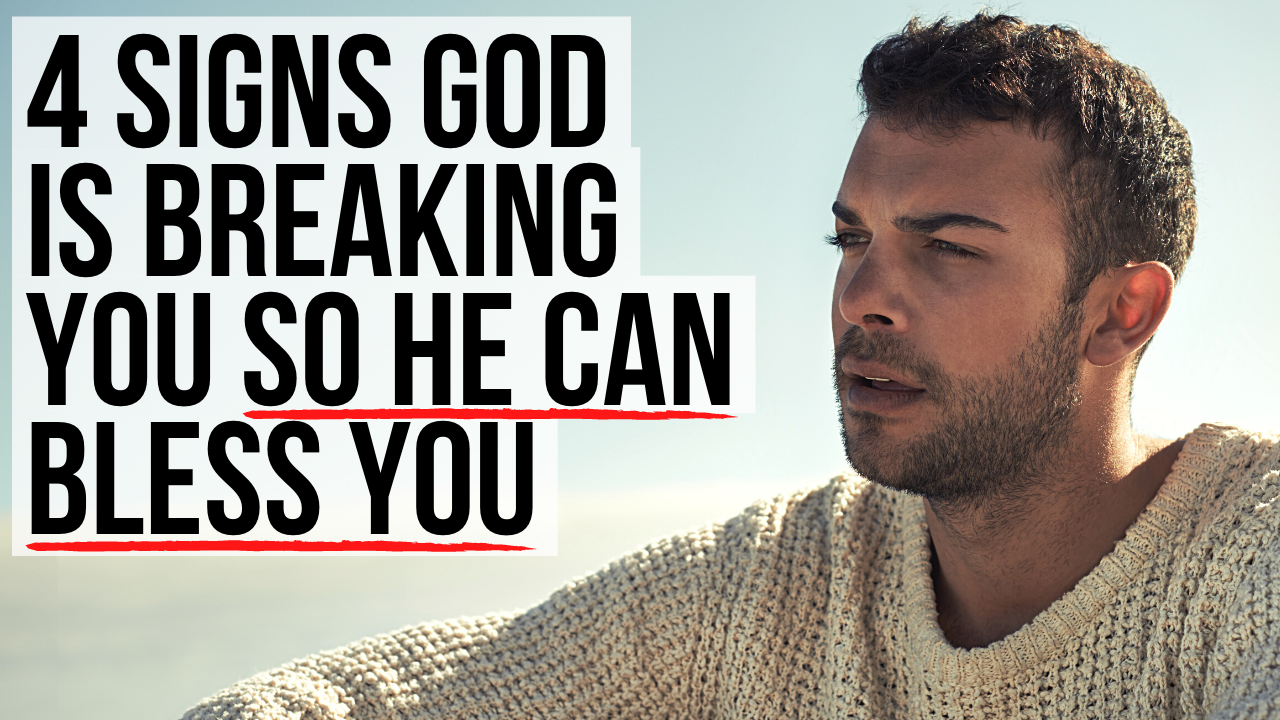 By studying Genesis 32 where God had to break Jacob down before he blessed him and built him up, we can see at least 4 common signs that often mean God is also breaking you down so he can build you back up and bless you.

1. If God Is Making You Face Your Fears from the Past That Are Still Affecting Your Present, This Is a Sign He Is Actually Breaking You So He Can Remake You

Leading up to Genesis 32, Jacob had lived a complicated life that was full of deceiving others and being deceived. According to Genesis 25:26, even at his birth, he was struggling to gain the upper hand over his twin brother Esau, which is why they named him Jacob, a name that means “He takes by the heel,” or “He cheats.” When these babies became men, according to Genesis 25:29-34, Esau was starving and exhausted, so Jacob used his brother’s moment of weakness against him and tempted Esau to sell his birthright for a cup of stew.

Next, Jacob stole Esau’s blessing by tricking their father Isaac. When Esau came to Isaac to be blessed, Genesis 27:35-36 states, “But he said, ‘Your brother came deceitfully, and he has taken away your blessing.’ Esau said, ‘Is he not rightly named Jacob?’ For he has cheated me these two times. He took away my birthright, and behold, now he has taken away my blessing.”

Jacob then fled for his life because Esau wanted to kill him. By the time we get back to Genesis 32, many years have passed but God had now called Jacob to return home so that he could be blessed. But before God would fully bless him, he first made him face his past. Genesis 32:9-12 states:

And Jacob said, ‘O God of my father Abraham and God of my father Isaac, O Lord who said to me, “Return to your country and to your kindred, that I may do you good,” I am not worthy of the least of all the deeds of steadfast love and all the faithfulness that you have shown to your servant, for with only my staff I crossed this Jordan, and now I have become two camps. Please deliver me from the hand of my brother, from the hand of Esau, for I fear him, that he may come and attack me, the mothers with the children. But you said, “I will surely do you good, and make your offspring as the sand of the sea, which cannot be numbered for multitude.”’”

Likewise, there come moments in life where God begins to highlight parts of our past that were displeasing to him. God wants to bless us, but before he will, he makes us face those parts of our lives where we strayed from him (1 John 1:8-10). He keeps bringing them up, forcing us to face our fears just like he did for Jacob.

So if God is forcing you to face your fears, this is a sign he is actually trying to break you down so he can then build you back up and bless you.

2. If God Is Stripping You of All the People, Places, and Things That You Have Found Comfort in, This Is Actually a Sign God Is Breaking You so He Can Remake You

There are times in life where God will take away everything you find comfort in to help you regain your first love. You see, though we often forget this, your life has always been about you and God. Other distractions creep in. Other lovers try to take our attention. Like Jacob who ran to a new land, who had become rich, and who tried to make himself happy by taking multiple wives, you may have run from God in your own way too.

But in the end, your life has always been about you and God and will always be about you and God. Before God can bless you and remake you into the person he wants you to be, he first has to take away everything that has gotten in the way of you and him. In Genesis 32:22-24, Jacob is making his last preparations before finally facing his brother. It states:

The same night [Jacob] arose and took his two wives, his two female servants, and his eleven children, and crossed the ford of the Jabbok. He took them and sent them across the stream, and everything else that he had. And Jacob was left alone. And a man wrestled with him until the breaking of the day.”

God, in the form of a man, wrestled with Jacob. But before he did, notice that he waited until Jacob was alone. He took away “everything else that he had.” No relationships, no children, no earthly riches – there was nothing left for him to find comfort in. It was finally just him and God. In Genesis 32:24 it’s as though God wants us to see this detail in the story, so he set it apart in one clear simple sentence, “And Jacob was left alone.”

God will take away everything you hold dear, and then he will wrestle you down to the ground so he can then raise you back up and bless you when you are ready to fully rely on him and nothing else.

3. If God Is Taking Away Your Strength, This Is a Sign He Is Actually Breaking You to Remake You

Sometimes we are too strong to be blessed. The world tells us that to get ahead we need to try harder, be tougher, and never stop trying no matter how many times we fail. But sometimes it’s not life knocking you down. Sometimes it’s God himself. The world says, “Keep getting back up.” But sometimes God is saying, “Stay down so I can bless you.”

When God started to wrestle with Jacob, Jacob started to wrestle back. Genesis 32:25 then says, “When the man saw that he did not prevail against Jacob, he touched his hip socket, and Jacob’s hip was put out of joint as he wrestled with him.”

Before God will bless you, he will remove your ability to wrestle with him. He will strip all of your power. He will break you down so he can build you back up. Once God finally blessed him, Genesis 32:31 then states, “The sun rose upon him as he passed Penuel, limping because of his hip.”

In Tony Evans sermon on Genesis 32, he said:

If Jacob walked on stage right now, he would be limping. And if we asked him, ‘Why are you limping?’, he would respond, ‘Because I’ve been blessed.’”

For the rest of Jacob’s life, he now had a limp. But this limp was a constant reminder of God’s blessing that only came when he was first wounded and weakened enough to receive it. Even when blessing others, Jacob’s weakness was there reminding everyone about the process of pain God first put Jacob through before blessing him. Hebrews 11:21 states, “By faith Jacob, when he was dying, blessed each of Joseph’s sons, and worshiped as he leaned on the top of his staff.”

He had lean on his staff his whole life because God had wounded him. But this wound was actually a weakening that led to his strengthening. God put Jacob through pain but it was to prepare him for the coming pleasures. When we see a problem in our lives, we see it as a barrier to our blessing. But when God sees our pain, he sees it as a bridge to our blessing.

So remember, if you remain faithful, the Bible teaches us that your barrier is often a bridge leading to greater blessings. As James 1:12 explains, “Blessed is the man who remains steadfast under trial, for when he has stood the test he will receive the crown of life, which God has promised to those who love him.”

4. If God Is Showing You How to Fight Your Old Identity and Embrace Your New Identity, This Is a Sign God Is Breaking You to Remake You

The principles we just talked about in point 3 can be easily misapplied. When we hear that we must die to gain life and that we must become weak so God can make us strong, we often then apply this to our lives by saying, “I don’t need to do anything but wait on God. If I do anything, it’s a lack of faith.”

This is a not a biblical application of these truths. While God does break us down, when he raises us up again, he then calls us to use that new strength he has given us to fight for his kingdom. We are active soldiers in God’s kingdom, but one of the first enemies we must destroy is our own false identities. Notice what happens next in Genesis 32:26-29. It states:

Then he said, ‘Let me go, for the day has broken.’ But Jacob said, ‘I will not let you go unless you bless me.’ And he said to him, ‘What is your name?’ And he said, ‘Jacob.’ Then he said, ‘Your name shall no longer be called Jacob, but Israel, for you have striven with God and with men, and have prevailed.’ . . . And there he blessed him.”

Anytime God asks a question, it’s never because he doesn’t already know the answer. God always asks us questions so we can become aware of the answer. God knew what Jacob’s name was. He just wanted to remind Jacob of what his name was. Remember, Jacob means “deceiver” or “cheater.” That’s who Jacob was. But God gives him a new name.

Likewise, God will not only break you to remake you, he will also rename you too. In other words, before God blesses you, he will change your very identity (Romans 6:4).