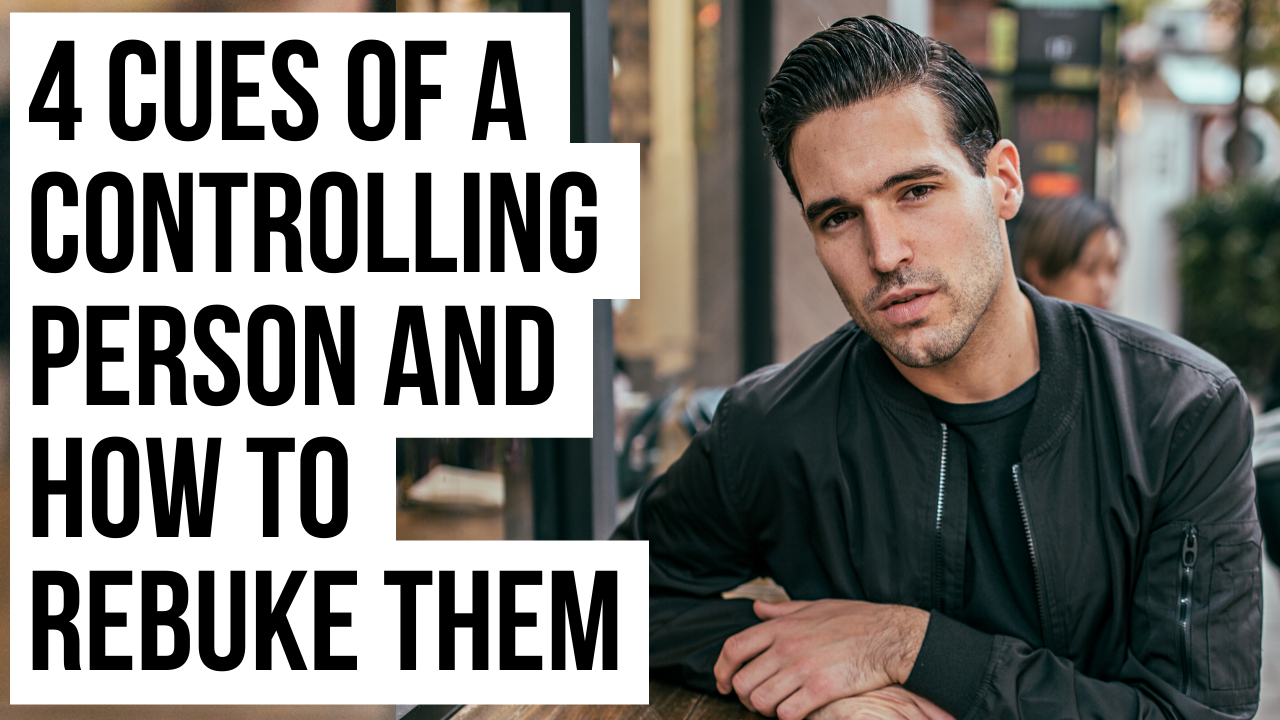 Here are four cues someone will show you when they are overly controlling and in need of being rebuked.

1. A Controlling Person Often Complains About What You Are Not Doing

Think back to the issues this person has had with you. If you have done offensive actions or said hurtful words or been intentionally neglectful, it’s possible this person is not being overly controlling but rather they are bringing up legitimate issues that you may need to work on.

However, if this person has repeatedly confronted you with complaints that are focused on what you have not done, this often is a sign this person is controlling and their issue is themself, not you. For example, it’s legitimate for someone to get their feelings hurt if you say, “Wow, that’s what you are wearing? Couldn’t you have dressed nicer?” However, if they come to you and say, “Why didn’t you notice my new outfit? I worked really hard to look nice for you and you didn’t even say anything?”, that is complaining about something you didn’t do.

Or let’s say you go out to eat and during your conversation you say, “Your career path seems like a dead end. I think you could do better.” It’s reasonable someone could be offended by that. But if you go out to eat and then this person later complains, “When I was talking about my career, you didn’t even say anything. It just felt like you don’t support me,” now this person is complaining about what you didn’t do.

Or let’s say it’s their birthday. If you are close with this person and you don’t get them a gift or at least call them to say you are thinking about them, this could reasonably hurt someone’s feelings. However, if you get someone a gift or you call them but then this person complains that your gift wasn’t good enough or you didn’t say the right thing, now this person is complaining about what you didn’t do.

Controlling people want everyone to act the way they think they should act. Rather than being offended by what people do, they get offended by what they don’t do. If someone is doing this to you, you may need to lovingly rebuke them. If you point out this trend and they repent (Luke 17:3), perhaps you can continue a relationship with them as they seek to not be so controlling. If they ignore you, you will need to rebuke them by removing them from a place of influence in your life (Proverbs 13:20).

Even though God could control us, he chooses not to. Rather, he tells us what to do and empowers us to do it (Philippians 2:13); but he still leaves us with the choice. Don’t let a controlling person control you. Let them know they will either behave around you or they will not get to see you.

As Titus 3:10-11 (NIV) instructs, “Warn a divisive person once, and then warn them a second time. After that, have nothing to do with them. You may be sure that such people are warped and sinful; they are self-condemned.”

2. A Controlling Person Is Often Overly Confrontational About Meaningless Things

Confrontation isn’t bad. When there is a true issue between two people, the loving thing to do is to try to work it out. Controlling people, however, are confrontational about everything.

Maybe the sky is greener today, maybe you do get lost in thought and accidently bump into people, and maybe the pastor did say the right verse but misquoted the chapter when trying to reference it. These are honest mistakes that normal people simply overlook and don’t dwell on. But an overly controlling person just can’t let it go. They have to point out every little flaw they see and make sure everyone else sees it too.

Proverbs 29:11 says, “A fool gives full vent to his spirit, but a wise man quietly holds it back.” And Proverbs 19:11 states, “Good sense makes one slow to anger, and it is his glory to overlook an offense.” Certainly there are times to bring up errors and correct people (Galatians 6:1). But an overly controlling person is also overly critical and confrontational about things that don’t need to be argued over.

3. A Controlling Person Rebukes Everyone for Everything and Thus Needs to Be Rebuked

This passage doesn’t say to never judge. Rather, it says we must judge ourselves first and more often than we judge others. Once we are seeing clearly, then we can help others with their sin. As Paul said:

If someone is caught in this sin of being too judgmental, God may lead you to loving judge them. You may need to rebuke this controlling person if they are in the church and they are repeatedly sinning by trying to control others.

4. A Controlling Person Is Never Happy with You But Always Wants to Be Around You

Controlling people torture you more than most because most mean people are mean and then they leave you alone. But a controlling person is never happy with you but for some reason they always want to be around you. They critique you, shame you, and push you down; but they always call you, pursue you, and try to keep you close.

They do this because controlling people need people to control. When they are alone, they have no one to blame but themselves. They need you in their life so they can avoid taking personal responsibility.

Don’t let someone’s pursuit of you flatter you to the point where you are willing to ignore their unhealthy need for control. In love, you must rebuke them and let them feel the weight of their actions. When you always let them back into your life, you are enabling their hurtful behavior. By warning them and then following through on the consequences you said would happen if they keep trying to control you, you are actually doing the loving thing for them. If no one rebukes them and never gives them real consequences, they will remain stuck in their sinful need for control.

As Proverbs 19:19 (NIV) says, “A hot-tempered person must pay the penalty; rescue them, and you will have to do it again.”