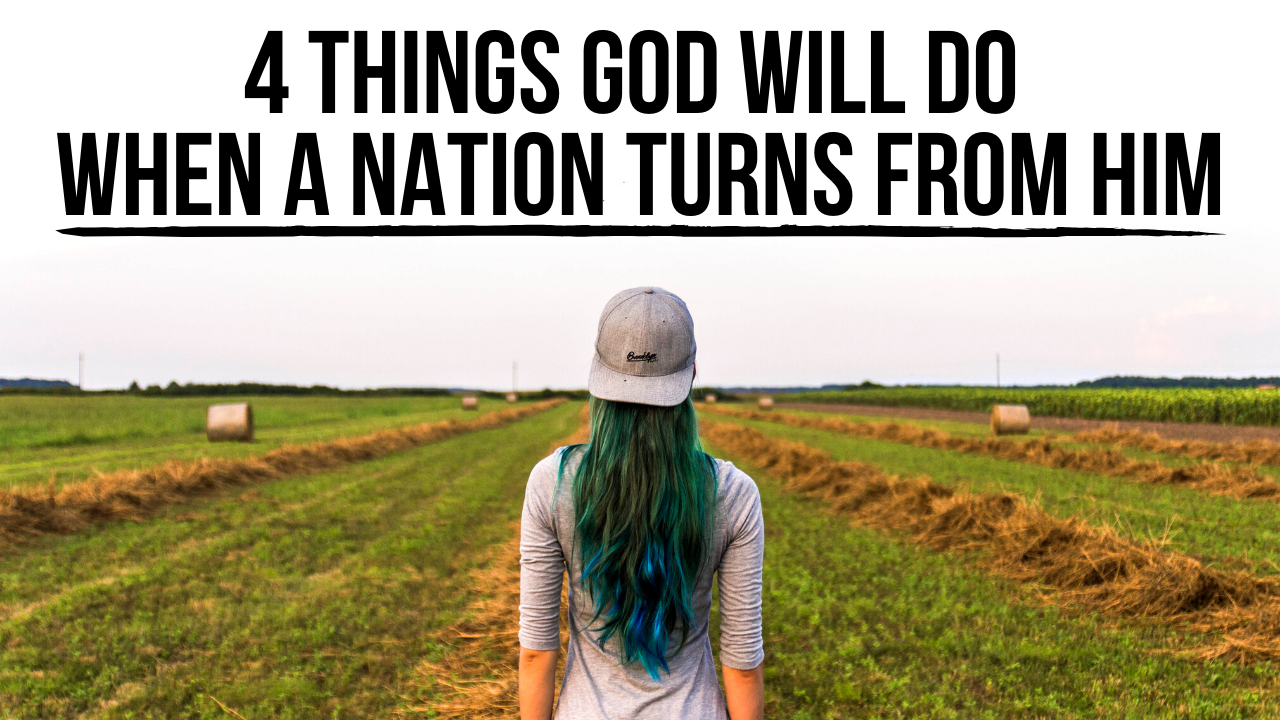 Ah, sinful nation, a people laden with iniquity, offspring of evildoers, children who deal corruptly! They have forsaken the Lord, they have despised the Holy One of Israel, they are utterly estranged. Why will you still be struck down? Why will you continue to rebel? The whole head is sick, and the whole heart faint. From the sole of the foot even to the head, there is no soundness in it, but bruises and sores and raw wounds; they are not pressed out or bound up or softened with oil. Your country lies desolate; your cities are burned with fire; in your very presence foreigners devour your land; it is desolate, as overthrown by foreigners.” (Isaiah 1:4-7)

Here are 4 things God will do when a nation turns from him.

1. When a Nation Turns from God, God Is Letting Unbiblical Churches Reap What They Sowed

One sign that the church is weak and fragile is when it starts to let itself mirror the national culture that it resides in. It starts with the external choices about things like the music, the Sunday morning dress attire, and the decorations of the building – which are not moral or immoral choices. It’s not sinful to make modern choices in these realms as there is a case to be made that it is wise to speak “the language” of those you seek to reach.

What often happens next, however, is sinful. The church oftentimes does not stop with making updates to the building, dressing more casually on Sunday morning, or using a more modern music style (again, all of which are not sinful updates to make). It then starts making updates to its theological beliefs and church practices in an attempt to attract more people from the culture. This is a problem.

If they are successful in attracting more people from the culture into that church by bending their beliefs to be more acceptable to this culture, then that church will quickly drift further and further away from God’s truth because more and more of the people who attend that church are there because they feel they fit in.

If people living in sin fit into your church, your church is failing. Obviously a church should be welcoming and should never judge those outside the church. But that is different than a church being made up of members who are living in sin themselves. The church is called to judge those inside the church, to hold itself to a biblical moral standard. As Paul explained in 1 Corinthians 5:9-13, which states:

I wrote to you in my letter not to associate with sexually immoral people— not at all meaning the sexually immoral of this world, or the greedy and swindlers, or idolaters, since then you would need to go out of the world. But now I am writing to you not to associate with anyone who bears the name of brother if he is guilty of sexual immorality or greed, or is an idolater, reviler, drunkard, or swindler—not even to eat with such a one. For what have I to do with judging outsiders? Is it not those inside the church whom you are to judge? God judges those outside. ‘Purge the evil person from among you.’”

When a church changes its core beliefs so more people from the culture will attend, the church is simply being shaped by the culture rather than being a source of change to that culture. As 2 Corinthian 6:14-18 explains:

Do not be unequally yoked with unbelievers. For what partnership has righteousness with lawlessness? Or what fellowship has light with darkness? What accord has Christ with Belial? Or what portion does a believer share with an unbeliever? What agreement has the temple of God with idols? For we are the temple of the living God; as God said,

Churches that are influenced by the godless world around them become godless themselves. This then shows in the moral fabric of that nation. If the church adapts to the beliefs of the sinful nation, what hope is there for that sinful nation? Who will be light to that nation if the light within that nation goes dark?

2. When a Nation Turns from God, He Lets Them Scoff at Him. But Then He Gives Them Over to Their Sin, Which Causes Their Misery to Increase

A nation that turns from God will be marked by its scoffing at even the idea of God. They will look at Christ and laugh. His followers will seem like a joke to them. But in his sovereignty God will use their own foolishness to shame them. As 1 Corinthians 1:18-21 explains:

Within a sinful nation God will always preserve for himself a small remanent of true followers. But the rest of the nation will be given over to their sin which will only increase their misery. As Romans 1:22-32 states:

Claiming to be wise, they became fools, and exchanged the glory of the immortal God for images resembling mortal man and birds and animals and creeping things.

Therefore God gave them up in the lusts of their hearts to impurity, to the dishonoring of their bodies among themselves, because they exchanged the truth about God for a lie and worshiped and served the creature rather than the Creator, who is blessed forever! Amen.

For this reason God gave them up to dishonorable passions. For their women exchanged natural relations for those that are contrary to nature; and the men likewise gave up natural relations with women and were consumed with passion for one another, men committing shameless acts with men and receiving in themselves the due penalty for their error.

And since they did not see fit to acknowledge God, God gave them up to a debased mind to do what ought not to be done. They were filled with all manner of unrighteousness, evil, covetousness, malice. They are full of envy, murder, strife, deceit, maliciousness. They are gossips, slanderers, haters of God, insolent, haughty, boastful, inventors of evil, disobedient to parents, foolish, faithless, heartless, ruthless. Though they know God’s righteous decree that those who practice such things deserve to die, they not only do them but give approval to those who practice them.”

If a nation resembles what was just described in these verses, then God will give them over to their sin and things will go from bad to worse for them. For as Proverbs 14:34 states, “Righteousness exalts a nation, but sin is a reproach to any people.”

3. When a Nation Turns from God, He Allows Them to Forfeit Their Personal Responsibilities to Corrupt Leaders

When God is not Lord of your heart, you will seek an earthly lord to rule over you. People always turn to worldly leaders because they crave to be ruled by someone. We were made to be ruled by our loving God. But in sin we lose sight of Jesus as our King and then put our hope in earthly leaders. This is what Israel did when they wanted a king. 1 Samuel 8:6-7 states:

But the thing displeased Samuel when they said, ‘Give us a king to judge us.’ And Samuel prayed to the Lord. And the Lord said to Samuel, ‘Obey the voice of the people in all that they say to you, for they have not rejected you, but they have rejected me from being king over them.”

When a nation rejects God, he gives them the leaders they deserve. Samuel warned the people that having kings rule over them will lead to more problems. But the people wanted a king nonetheless. 1 Samuel 8:18-22 explains:

‘And in that day you will cry out because of your king, whom you have chosen for yourselves, but the Lord will not answer you in that day.’ But the people refused to obey the voice of Samuel. And they said, ‘No! But there shall be a king over us, that we also may be like all the nations, and that our king may judge us and go out before us and fight our battles.’ And when Samuel had heard all the words of the people, he repeated them in the ears of the Lord. And the Lord said to Samuel, ‘Obey their voice and make them a king.’ Samuel then said to the men of Israel, ‘Go every man to his city.’”

Sinful humans need God but they choose earthly leaders. They forfeit their personal responsibility to follow God and give their freedom away to bad leaders so they can “fight [their] battles.” When a nation rejects God, he gives them the leaders they want, which leads to more pain and misery.

4. When a Nation Forgets God, He Reminds Them of His Power By Judging Them and Making Them Disappear If They Do Not Repent

The nations have sunk in the pit that they made; in the net that they hid, their own foot has been caught. The Lord has made himself known; he has executed judgment; the wicked are snared in the work of their own hands. The wicked shall return to Sheol, all the nations that forget God. For the needy shall not always be forgotten, and the hope of the poor shall not perish forever. Arise, O Lord! Let not man prevail; let the nations be judged before you! Put them in fear, O Lord! Let the nations know that they are but men!”

We started this article with the warning found in Isaiah 1. But there are words of hope found in Isaiah 1 too. So let’s end with these promises made to those who truly repent from their sins. Isaiah 1:16-20 states:

Wash yourselves; make yourselves clean; remove the evil of your deeds from before my eyes; cease to do evil, learn to do good; seek justice, correct oppression; bring justice to the fatherless, plead the widow’s cause. ‘Come now, let us reason together, says the Lord: though your sins are like scarlet, they shall be as white as snow; though they are red like crimson, they shall become like wool.  If you are willing and obedient, you shall eat the good of the land; but if you refuse and rebel, you shall be eaten by the sword; for the mouth of the Lord has spoken.’”

Anyone who puts their faith in Jesus, repents of sin, and depends on his grace alone for salvation can live a new life for his glory. But only through Christ is this possible. As John 3:16 says, “For God so loved the world, that he gave his only Son, that whoever believes in him should not perish but have eternal life.”