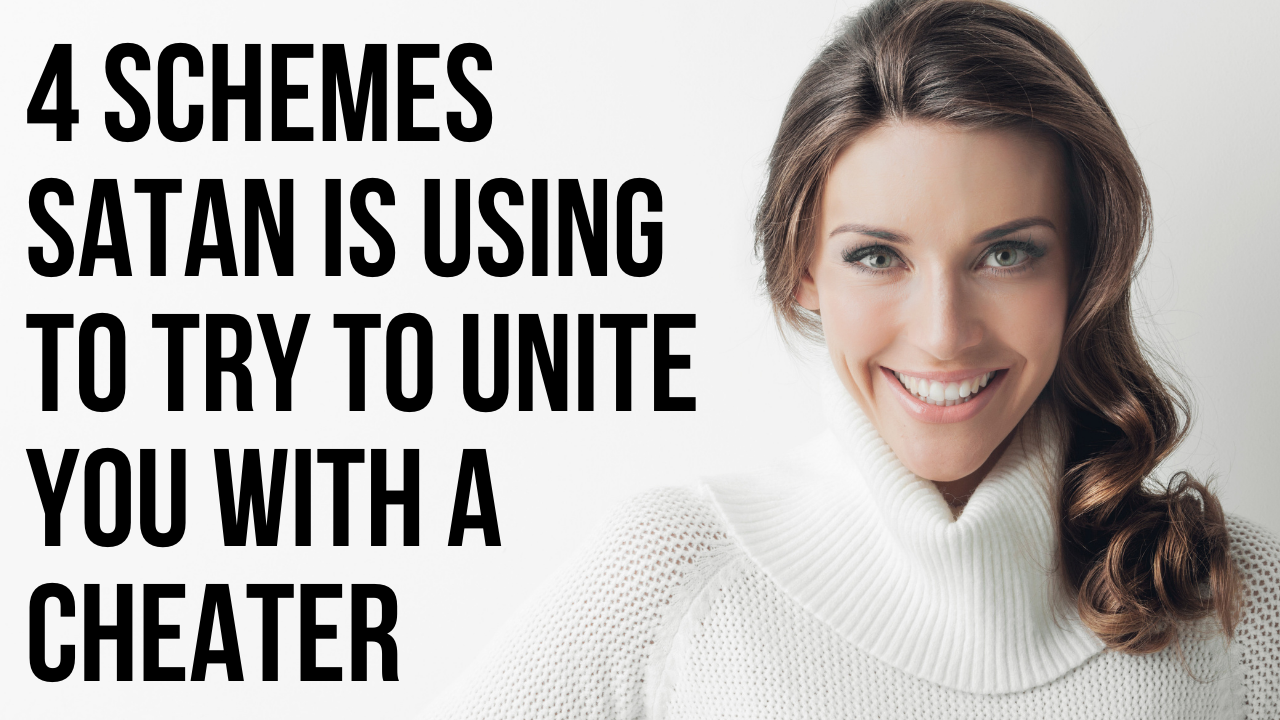 Here are 4 common ways Satan tries to produce relationships that end in unfaithfulness.

1. Satan Will Try to Link You with a Cheater By Tempting You to Minimize the Seriousness of God’s Commands About Relationships and Marriage

The devil also knows that God loves his people and has given them his word in love, thus Satan will try to bring you harm by tempting you to have a dismissive attitude towards God’s rules for relationships.

One of the most hurtful but common outcomes that occurs in relationships when God’s word is not followed is infidelity. God’s rules are like laws in our society meant to keep people safe. For example, a speed limit on a mountain road with intense switchbacks and cliffs is not meant to be an oppressive law. It’s meant to save your life.

Likewise, when God gives us rules for relationships, he’s not trying to keep you from fun. He’s trying to save you from a damaging relationship. 2 Timothy 3:16-17 states:

All Scripture is breathed out by God and profitable for teaching, for reproof, for correction, and for training in righteousness, that the man of God may be competent, equipped for every good work.”

Those who ignore God’s rules experience what God was trying to protect them from. Satan wants you to ignore God’s warnings in Scripture so you will end up with a cheater who will hurt you.

2. Satan Will Try to Link You with a Cheater By Tempting You to Engage in Premarital Sexual Activity

One early sign that you are dealing with a future cheater is when this person pressures you and tempts you to have sex with them. When someone is only in a relationship for the sexual pleasure, they will often exit that relationship for sexual pleasure with someone else. But because they are selfish and don’t really care about you, they will try to have sex with you as long as they can while they are also having sex with other people behind your back.

While you can never guarantee what anyone will do in the future, you have a much better chance of marrying a faithful spouse who won’t cheat on you in marriage one day if you only date people who take sexual purity seriously.

Satan knows that if he can get you linked up with someone who is willing to have sexual encounters with you without the commitment of marriage, then that person will be much easier to manipulate into adultery later on. They have already showed they don’t value the covenant bond of marriage; therefore, they will be more likely to disrespect that covenant bond with you by cheating on you one day. Galatians 5:19-21 states:

If this person is walking in their flesh with you, they are very likely to want to walk in their flesh with someone else too one day. Satan knows that the sin nature always wants more sin. Don’t think you can keep someone faithful to you by giving into their sinful demands for sex. Once they get what they want from you, they will look for someone else to use while still using you as long as they can.

As 2 Timothy 3:13 says, “. . . evil people and impostors will go on from bad to worse, deceiving and being deceived.”

3. Satan Will Try to Unite You with a Cheater By Tempting You to Always “Assume the Best of People”

The advice to “assume the best of people” sounds nice but it’s actually not biblical. I’m not saying we should walk around assuming the worst of every person that we meet, constantly doubting people who have given us no reason to doubt them. I’m not saying you should be untrusting towards everyone, just waiting for people to betray you. That’s too far and that’s also unbiblical.

Opponents must be gently instructed, in the hope that God will grant them repentance leading them to a knowledge of the truth, and that they will come to their senses and escape from the trap of the devil, who has taken them captive to do his will.”

People who have not repented of their sins and who have not put their faith in Jesus are under “the trap of the devil” and are “taken captive to do his will.” So it’s not biblical to always assume the best of people. It’s actually biblical to assume that someone is under Satan’s lies and is captive to do the devil’s will. We should pray for them, witness to them, but we certainly are not called to trust people like this.

If you are the type of person who assumes the best of people, Satan will use this to blind you to the evidence of a cheater that God is showing you. You will look past all the red flags and then one day you will wake up because it will be impossible to deny this person’s infidelity any longer.

Don’t always assume the worst of everyone. But don’t assume the best either. We must assess people by their actions over a healthy period of time before we begin to really trust them.

4. Satan Will Try to Unite You with a Cheater By Tempting You to Ignore the Lack of Integrity You See in This Person’s Life as a Whole

In most cases, when someone is willing to go so far as to cheat on their boyfriend or girlfriend or even their spouse, this person is also acting dishonest in many other parts of their life as well.

They will cheat on their taxes when they feel like they can get away with it. They will not return the extra $20 when the clerk gives them the wrong change back. They will ask their coworker to clock them in when they are running late so it looks like they were there on time.

Adultery is a big and bold form of deception, which is why many people work their way up to this sin rather than just all of a sudden start cheating. Being unfaithful is usually preceded by smaller forms of deception that just kept emboldening this person to deceive more and more.

Proverbs 10:9 states, “Whoever walks in integrity walks securely, but he who makes his ways crooked will be found out.” Eventually all liars get busted. They always press it more and more until eventually they get so cocky, they get caught.

So don’t overlook those littles forms of deception you see in people. That is God giving you warnings about how this person will behave in the future. If someone lacks integrity in small ways, it’s much more likely they will lack integrity in bigger ways too one day if they do not repent. Look for that person who “walks in integrity” in all the areas of their life, including the small ways.