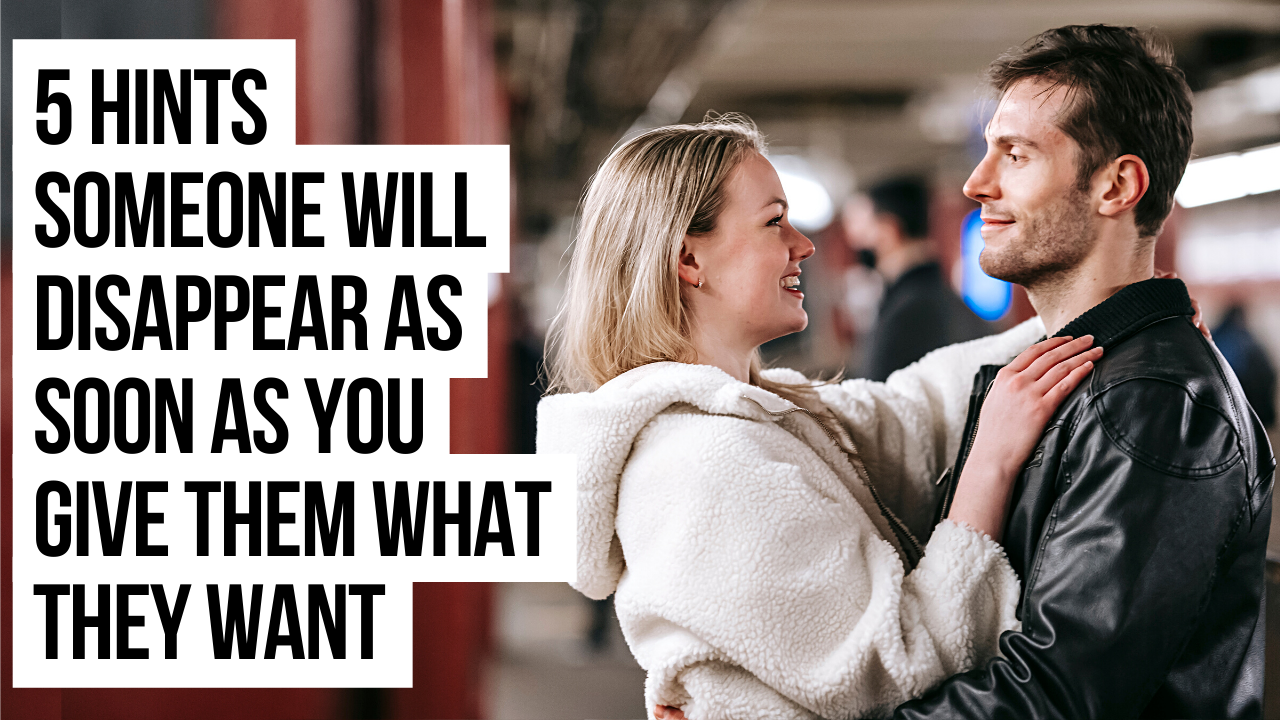 Here are 5 hints that God is warning you that someone will leave you as soon as they get what they want from you.

1. If They Are Promising You Way Too Much Way Too Soon

As the old saying goes, “Easy come, easy go.” People who rush into love are likely to rush out of love just as fast. Those who promise you the most are often the ones who disappoint you the fastest. When someone does what they say, they are careful not to say too much.

It feels good when someone is really excited about you, but you should be more excited about the person who likes you but is taking their time not to rush the relationship. As Ecclesiastes 5:5-7 states:

It is better that you should not vow than that you should vow and not pay. Let not your mouth lead you into sin, and do not say before the messenger that it was a mistake. Why should God be angry at your voice and destroy the work of your hands? For when dreams increase and words grow many, there is vanity; but God is the one you must fear.”

The person who comes in hot and heavy is usually the person who is ruled by their emotions. Once you give them what they want and their emotional desires are fulfilled, they lose energy and disappear just as quickly as they appeared.

2. When Someone Is Asking You to Give Them More Than They Have Earned

If you owned a business and one of your employees asked you to give them their year’s salary in advance, would you do it? Of course you wouldn’t! Employees should only be paid for what they worked for. If a business owner started paying people large sums of money before they earned it, many of those people would leave with the money before working the hours to earn that money.

Likewise, you are the “business owner” of you. If you get into the habit of giving people more of yourself than they have earned, you are going to go emotionally bankrupt really fast. I’m not saying that relationships should be treated like a business, but I am saying we shouldn’t treat our businesses better than our own hearts.

If someone wants sex before marriage, if someone wants exclusive rights to you before they have given you any commitment, or if someone is asking for material assistance in inappropriate ways, these are signs they will leave you as soon as you give them what they want.

As Proverbs 11:15 (NLT) states, “There’s danger in putting up security for a stranger’s debt; it’s safer not to guarantee another person’s debt.”

3. If Someone Is Too Thirsty for Your Love

The worst salesmen are the ones who want to make the sale the most. For example, if you walk into a car dealership and you just feel this guy’s desperation to sell you something, you will struggle to believe what he is saying. It feels like he wants your money so bad that he might be willing to lie about the car he is showing you.

On the other hand, if a salesman warns you about the problems a car has or lets you know they are having a sale next week so you should come back then to save money, you will trust him more than the pushy salesman.

Likewise, you should be on guard against the person who swoops into your life and is desperate for your love. Once they get a drink, they will jump back on the road without giving you a second thought because they got what they wanted.

4. If Someone Is Infatuated with Your Online Persona

In this digital world, it’s inevitable that we all have an online persona. In a way, it’s impossible not to because we can’t live stream our lives all the time. We have to pick and choose what we share with the world. It’s very easy for someone to see what we share and get a false view of who we really are.

While it’s ultimately the person’s job not to be infatuated with us, this is one point that we can also be setting ourselves up for attracting the wrong types of people. If you are posting highly edited pictures of yourself, over sharing the best moments of your life, or presenting an inauthentic image of yourself online, you are going to attract people who are infatuated with your online persona.

I’m not against social media or online dating, but it’s important to transition from the digital to the real before getting your hopes up about anyone. If someone is too immature to realize your digital profiles are not capable of capturing the full essence of who you are but they have allowed themselves to fall for you without really knowing anything about you except what you share online, this is the type of person that will very easily leave you once you give them what they want.

God can use the internet for good if we follow the Spirit’s leading, but Satan can also use the internet for evil if we let him. As 1 Peter 1:8 states, “Be sober-minded; be watchful. Your adversary the devil prowls around like a roaring lion, seeking someone to devour.”

If someone is a drunk on your digital persona, they are not sober-minded and Satan may be trying to use them to bring harm into your life. Look for the person who sees the internet as a tool to be used rather than a reality to be lived in.

5. If Someone Is Self-Destructive

If they can’t take care of themselves they will be unable to be there for you. Even if they want to be there for you, if someone is addicted, struggling mentally in severe ways, or hates themself, their self-destruction will make them disappear from your life eventually.

As Proverbs 26:10 states, “Like an archer who wounds everyone is one who hires a passing fool or drunkard.” Don’t hire someone to be a part of your life if they are stuck in foolishness. They will wound you deeply.

They need help, but as their boyfriend or girlfriend, you are not able to offer them that help because your motives are mixed. Their downward cycle will hurt you in the end more than you can ever help them as a romantic partner.

If you are romantically interested in someone like this, I would pray for them and then point them towards qualified people who may be able to help them.