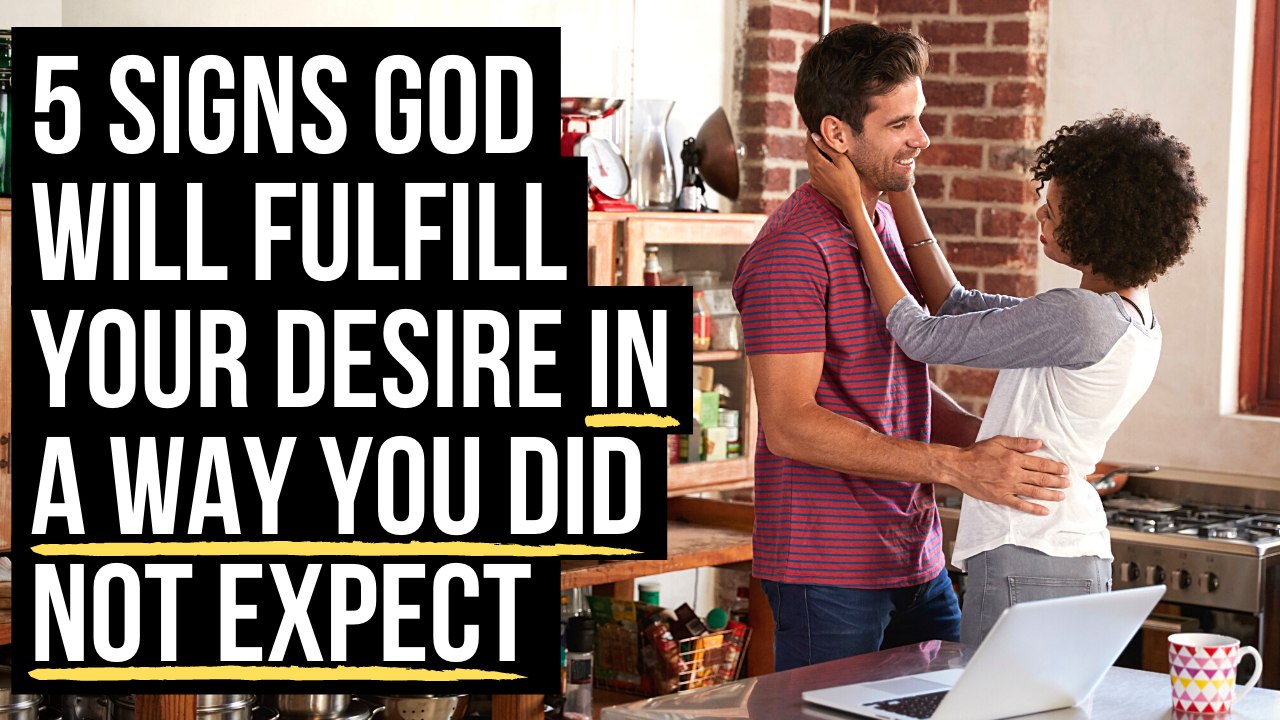 Here are 5 common ways God will fulfill your desire in an unexpected way.

1. God Will Often Fulfill Your Desire in an Unexpected Way By Leading You to His Yes By First Giving You a No

God is so powerful and all knowing that we must never doubt his love and goodness even when he gives us a “no” to the thing we desire. Oftentimes, the no God gives is actually in preparation for the “yes” he will give eventually. Notice how Jesus first said no to the gentile woman so he could then say yes to her. Mark 7:24-30 explains:

And from there he arose and went away to the region of Tyre and Sidon. And he entered a house and did not want anyone to know, yet he could not be hidden. But immediately a woman whose little daughter had an unclean spirit heard of him and came and fell down at his feet. Now the woman was a Gentile, a Syrophoenician by birth. And she begged him to cast the demon out of her daughter. And he said to her, ‘Let the children be fed first, for it is not right to take the children’s bread and throw it to the dogs.’ But she answered him, ‘Yes, Lord; yet even the dogs under the table eat the children’s crumbs.’ And he said to her, ‘For this statement you may go your way; the demon has left your daughter.’ And she went home and found the child lying in bed and the demon gone.”

Not only did Jesus say no to this woman at first, he said it in a way that could have been taken very offensively. But notice that this woman’s positive response to Jesus’ no was actually what led to Jesus’ yes to her. Jesus said to her, “For this statement you may go your way; the demon has left your daughter.” If Jesus would not have said, “Let the children be fed first, for it is not right to take the children’s bread and throw it to the dogs” the woman could not have then said, “Yes, Lord; yet even the dogs under the table eat the children’s crumbs.” And again, Jesus said this statement of faith was the reason he would grant her request.

The point I’m making here is that it is very easy to get offended at God when he gives you a no that you don’t understand. Just like this woman who asked for a good thing (the healing of her daughter), so too will God often give you a no to the good things you ask him for like marriage, a new job, healing, or an open door to an opportunity you desire. How you respond to this no will often determine what happens next. I’m not saying you will always get what you want if you remain faithful even when God says, no; but I am saying this is the case at many times in life.

God will often give you a no so you can express the faith you need to receive his yes.

2. God Will Often Fulfill Your Desire in an Unexpected Way By Pushing You Towards His Will Through the Attacks of Sinful People

Satan is dog on a leash. When you really study the Scriptures, it’s crystal clear that God and Satan are not in a cosmic battle over control. God rules over Satan. Satan is subject to God’s power. Anything Satan does, God allows. For a good example of this you can read Job 1 and 2.

The point I’m making here is that even evil things that happen are actually used by God for his greater purpose. God never causes people to sin, but God is still sovereign over the outcome of sin. As Proverbs 16:4 states, “The Lord has made everything for its purpose, even the wicked for the day of trouble.”

One biblical example of this can be seen in Acts 7 and 8. In Acts 7 Stephen is stoned for proclaiming Jesus as Lord. Acts 8:1, 4 then state:

And there arose on that day a great persecution against the church in Jerusalem, and they were all scattered throughout the regions of Judea and Samaria . . . Now those who were scattered went about preaching the word.”

Persecuting people for their religious beliefs is a sin. But God used this sin against his people to actually spread his word to more people, which is what he wanted. He didn’t cause the sin but he did direct the outcome of the sin.

Likewise, sometimes you will never be motivated enough to leave that job God doesn’t want for you until an evil person starts attacking you and making your life miserable at work. Sometimes you will stay stuck in a bad relationship until this person you are with does something so sinful you finally wake up and repent. Sometimes you will be too spiritually sleepy to share the gospel until the government starts attacking you and you wake up to see how dangerously important the gospel really is, which is why they want to stop it.

The point is, sometimes God will actually lead you to where he wants you by pushing you forward through the attacks of sinful people.

3. God Often Fulfills Our Desires in Ways We Do Not Expect By Using Us to Begin What Someone Else Will Complete

You will know your desire is truly from God when your deepest desire is to contribute the ultimate goal God has for you rather than being the one who gets the praise for the completion of this work. One example of this type of situation is the building of the temple that David wanted to build but which God told him his son Solomon would complete. 1 Kings 8:17-20 explains:

I love that line where God said to David, “Whereas it was in your heart to build a house for my name, you did well that it was in your heart. Nevertheless, you shall not build the house.” Basically God said that David’s desire was good even though it would not be fulfilled in the way that he wanted. God used David to get the supplies ready but it was his son Solomon who would complete the work.

Sometimes you have a desire that God is pleased with but which he still will not fulfill in the way that you had originally hoped. Sometimes he just wants you to lay the foundation that someone else will build upon. Maybe you really loved someone and wanted to marry them, but God only wanted you both to be a part of each other’s growth journey. God could have used each other to prepare each other for your future spouses. Or perhaps you wanted to start a church. God could be pleased with this desire but he might simply call you to help someone else start a church.

May our lives be completely God-centered rather than goal centered. Like Paul who said in 1 Corinthians 3:5-7, which states:

What then is Apollos? What is Paul? Servants through whom you believed, as the Lord assigned to each. I planted, Apollos watered, but God gave the growth. So neither he who plants nor he who waters is anything, but only God who gives the growth.”

4. God Will Often Fulfill Your Desire in an Unexpected Way By Letting It Die So He Can Raise It from the Dead

Sometimes the very things we desire need to die before we can have them as God wants them to be. A powerful example of this can be seen in John 11 where Jesus purposefully let Lazarus die so he could raise him from the dead. John 11:3-6 states:

So the sisters sent to him, saying, ‘Lord, he whom you love is ill.’ But when Jesus heard it he said, ‘This illness does not lead to death. It is for the glory of God, so that the Son of God may be glorified through it.’ Now Jesus loved Martha and her sister and Lazarus. So, when he heard that Lazarus was ill, he stayed two days longer in the place where he was.”

Healing Lazarus would have been glorious. But raising Lazarus from the dead brought God even more glory through Jesus. Sometimes God will say no to something at first and let it die because he doesn’t just want something good for you, he wants what is best for you. In John 11:14-15 it states, “Then Jesus told them plainly, ‘Lazarus has died, and for your sake I am glad that I was not there, so that you may believe. But let us go to him.’” Jesus let Lazarus dies so he could bring more glory to God by raising him.

God will often do the same things in our lives too. He hears our prayers but in love he often does not answer them right away. He often lets our desires intentionally die so he can raise them back up in a more glorious way.

For example, many people get married and later thank God that he said no to their prayers about a previous relationship to someone else they thought they really wanted to marry at that point in their life. His “no” to that relationship was because he knew that was not the one.

God will often have to say no to the person you think is the one so he can then say yes to your relationship with the person he does want you to marry. Sometimes God has to even let your desire for marriage itself die so that all the idols of marriage in your heart can die; but then God will raise that desire back up in a pure way that truly is focused on bringing glory to Jesus.

5. God Will Often Fulfill Your Desire in an Unexpected Way By Rejecting Your Surface Request But Granting Your Deeper Request

Perhaps the most unexpected way God fulfills our desires is by removing the layers that are covering our deepest desires. For example, sometimes the loss of a human relationship strips away all the layers covering your deepest desire for God. Sometimes to satisfy your deepest longing for Christ himself, he has to reject the other desires you have that are getting in the way. Psalm 119:70-72 says:

. . . their heart is unfeeling like fat, but I delight in your law. It is good for me that I was afflicted, that I might learn your statutes. The law of your mouth is better to me than thousands of gold and silver pieces.”

In love, God will often strip away all the layers of fat covering our hearts so we can feel him again. In love, God will remove all the things we think we need so that our truest longing is laid bare before him. When the surface requests are stripped away, it’s then that God can fulfill our deepest desires for him.