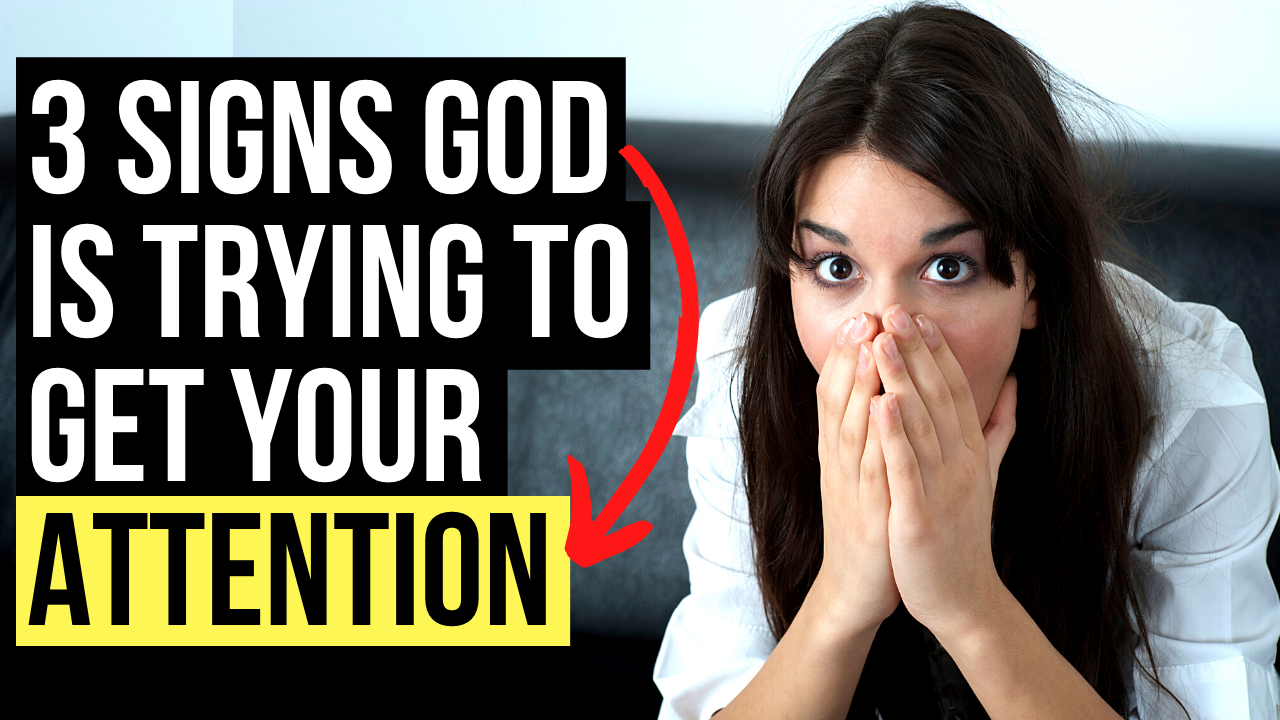 Here are 3 signs that often mean God is trying to get your attention.

1. If You Are Angered By Something You See in Others, This Is Often God Revealing Something to You About Yourself

There are different types of anger and there are many different reasons for anger, so I’m certainly not saying that all forms of anger are a sign that God is trying to get your attention. However, it is also true that when we are subconsciously blinded to something in ourselves, God will often reveal it to us by pointing it out in others. In other words, your emotional reaction to certain things is revealing something specific about what is going on in your heart. Here’s what C.S. Lewis said:

I pointed out a moment ago that the more pride one had, the more one disliked pride in others. In fact, if you want to find out how proud you are the easiest way is to ask yourself, ‘How much do I dislike it when other people snub me, or refuse to take any notice of me, or shove their oar in, or patronize me, or show off?’ The point is that each person’s pride is in competition with everyone else’s pride. It is because I wanted to be the big noise at the party that I am so annoyed at someone else being the big noise.”

A powerful biblical example of this can be seen when God sends Nathan to convict David of his sin with Bathsheba. 2 Samuel 12:1-7, 13 states:

And the Lord sent Nathan to David. He came to him and said to him, ‘There were two men in a certain city, the one rich and the other poor. The rich man had very many flocks and herds, but the poor man had nothing but one little ewe lamb, which he had bought. And he brought it up, and it grew up with him and with his children. It used to eat of his morsel and drink from his cup and lie in his arms, and it was like a daughter to him. Now there came a traveler to the rich man, and he was unwilling to take one of his own flock or herd to prepare for the guest who had come to him, but he took the poor man’s lamb and prepared it for the man who had come to him.’ Then David’s anger was greatly kindled against the man, and he said to Nathan, ‘As the Lord lives, the man who has done this deserves to die, and he shall restore the lamb fourfold, because he did this thing, and because he had no pity.’ Nathan said to David, ‘You are the man!’ . . . David said to Nathan, ‘I have sinned against the Lord.’”

God knew how to get David’s attention. It was no coincidence that Nathan told David a story about sheep. Remember, David grew up as a shepherd. It would have been so easy for David to relate to this story. He knew the feeling of affection for a little ewe lamb. He knew how it felt to love your animal. Not only that, because of how Saul completely mistreated David when he was young, poor, and on the run for his life, he could also relate to the poor man with nothing who was being abused by the rich man with everything. And so when he heard this story, his heart was awakened.

Awakened from it’s sinful slumber, it was then that God convicted him of his sin. Nathan didn’t walk into the room and say “You are the man!” No, God had him wait until David’s heart was ready to hear.

Likewise, God knows how to speak to your heart. He knows your story. He knows what makes you tick. And when your heart has been awakened, it’s often at those moments where God speaks clearly.

So if your heart has been upset, angered, or unsettled, this could mean God is trying to get your attention about something.

2. If God Has Removed Everything That Was Once Distracting You, This Is Often a Sign God Is Trying to Get Your Attention

My son is a lot like me in that we are not very good at multitasking. We both have an ability to really focus on one thing very clearly and for long periods of time. But if you try to talk to us about something else while we are doing that one thing we are focused on, it’s like talking to a wall. We don’t mean to ignore you, we just can’t focus on more than one thing at a time.

This has become painfully obvious to my wife who already knew this about me but is now also seeing this in my son as she attempts to homeschool him. If there is anything on the table, he would rather focus on that than learn his lessons. Fidgeting with his pencil, looking at the birds out the window, trying to get the cat to come over to him – anything to avoid what she wants him to focus on. And so to help get his attention, she has to remove all the distractions. He can then focus on what she needs him to do.

The same thing often happens in our lives too when God is trying to teach us something. Learning is hard, and since we naturally try to avoid hard things, we will often choose to focus on anything we can other than what God wants us to focus on. Like a loving mother trying to teach her little boy the valuable lessons she knows he will need to succeed in the adult world one day, so too does God remove all the distractions from our lives so we can focus on what he knows we must learn to succeed in life.

As Paul said when he was teaching Timothy, “Share in suffering as a good soldier of Christ Jesus. No soldier gets entangled in civilian pursuits, since his aim is to please the one who enlisted him” (2 Timothy 2:3-4).

3. If God Is Closing Every Door Except for One, Oftentimes This Means God Is Trying to Get Your Attention

In kindness God often shuts doors in our lives to prevent us from going down paths he does not want for us. Sometimes you will have options that you need to pray about, but at other times the Lord will get your attention and tell you where he wants you by literally closing every door and leaving only one option left for you to take. This is what happened to Paul in Acts 16:6-10, which states:

And they went through the region of Phrygia and Galatia, having been forbidden by the Holy Spirit to speak the word in Asia. And when they had come up to Mysia, they attempted to go into Bithynia, but the Spirit of Jesus did not allow them. So, passing by Mysia, they went down to Troas. And a vision appeared to Paul in the night: a man of Macedonia was standing there, urging him and saying, ‘Come over to Macedonia and help us.’ And when Paul had seen the vision, immediately we sought to go on into Macedonia, concluding that God had called us to preach the gospel to them.”

While it’s easy to focus on the vision Paul received, that is not the normal way God will get your attention. It’s possible God uses something more supernatural like this to get your attention, but more often than that he closes doors and opens doors like he did for Paul. His dream was simply a confirmation and not the main way he knew where God wanted him. The closed doors to other places and the open door to Macedonia ultimately helped him conclude that God had called them to preach the gospel there.

So if God has only left you with one viable option in a particular area of your life, this usually means he’s trying to get you to focus your attention there.