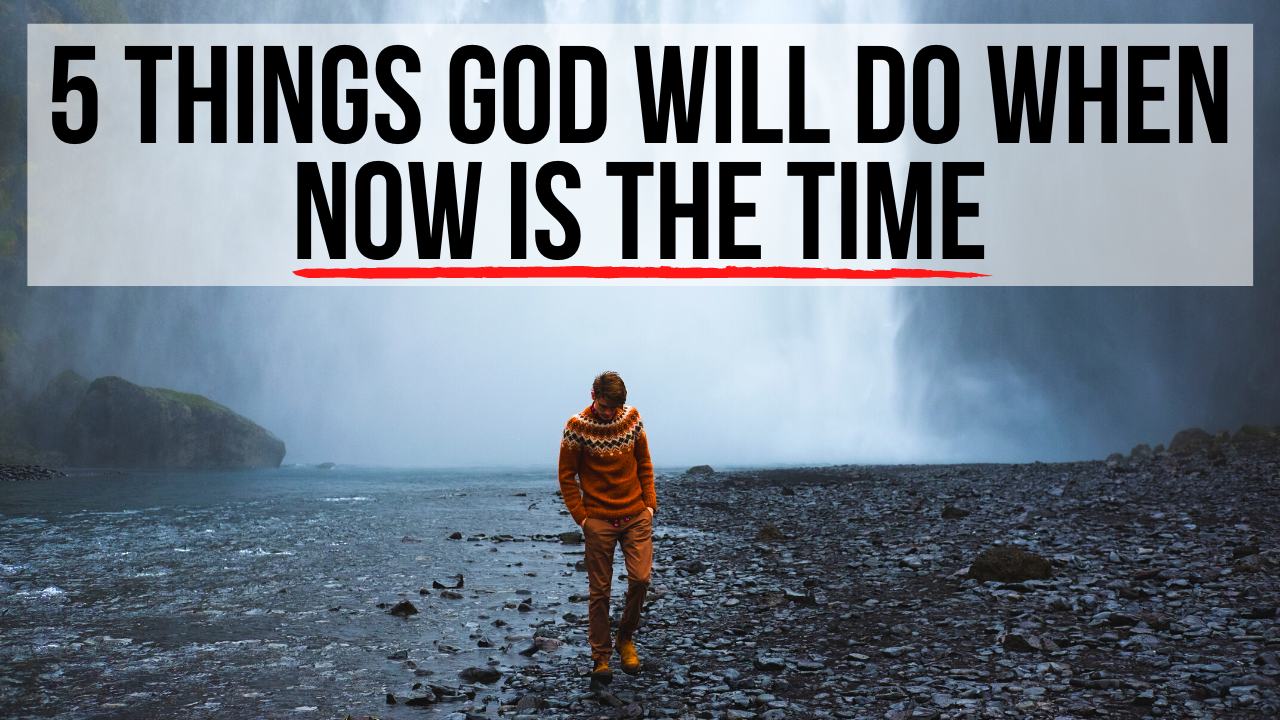 If you are wondering if now is the time to act in a particular area of your life, here are 5 things God will often do to help you know when it’s time to act.

1. When Nothing Will Change By Waiting Longer, Usually God Is Saying Now Is the Time to Act

Waiting is biblical. Not acting on an opportunity is sometimes exactly what God wants for you. Just because a door opens does not always mean that God wants you to walk through it. And sometimes saying no is actually the answer that will make the biggest impact on your personal growth.

But biblical waiting always has a biblical purpose. Throughout the Bible we are also given many examples of God’s people acting and stepping out in faith when the time was right. In Exodus 2 Moses flees from Egypt and goes to Midian. He was then a shepherd for 40 years. In Exodus 3, God speaks to Moses through the burning bush and calls him to return to Egypt to confront Pharaoh and lead the Israelites into the Promise Land. In Exodus 4:19 it states, “And the Lord said to Moses in Midian, ‘Go back to Egypt, for all the men who were seeking your life are dead.’” For a long season it wasn’t time for Moses to go back, but then God let him know when it was time for him to go back.

My point is, like Moses, God has a purpose for the different seasons. If he calls you to avoid something for a while, there will be a reason for it. When there is no more reason to avoid it, this is often a sign God is saying “now is the time.”

2. If You Have Completed Your Season of Internal Preparation and Your Growth Is Getting Stagnant, Usually This Is a Sign God Is Saying Now Is the Time to Act

Before God calls us to do certain things, he often trains our minds and prepares our hearts first. In other words, before certain seasons of our lives begin, God often prepares us internally first.

Certainly our training from the Lord will overlap when it comes to internal training and external training. God will always be teaching us truth in our hearts while also teaching us through life experiences. But there are times when we are in a heightened season of internal training which often comes before the external action steps. Notice how this played out in the life of Apollos in Acts 18:24-28, which states:

Now a Jew named Apollos, a native of Alexandria, came to Ephesus. He was an eloquent man, competent in the Scriptures. He had been instructed in the way of the Lord. And being fervent in spirit, he spoke and taught accurately the things concerning Jesus, though he knew only the baptism of John. He began to speak boldly in the synagogue, but when Priscilla and Aquila heard him, they took him aside and explained to him the way of God more accurately. And when he wished to cross to Achaia, the brothers encouraged him and wrote to the disciples to welcome him. When he arrived, he greatly helped those who through grace had believed, for he powerfully refuted the Jews in public, showing by the Scriptures that the Christ was Jesus.”

Like Apollos, God teaches us things and gives us missions to accomplish. But then he also pauses us for moments, pulls us aside, and explains things even “more accurately” to us. But once things have been explained more accurately and we have grasped something internally that we needed to grasp, then it’s time to get moving again.

So if your growth is slowing because it’s time to act again after a season of internal reflection and growth, this is often a sign God is saying now is the time.

3. If You Are Presented with the Opportunity You Have Been Praying For But It Will Pass You By If You Don’t Act Soon, Usually This Means God Is Telling You Now Is the Time

Sometimes you will know it’s not the time for something because that thing you want is not even possible to obtain even if you did decide to act. Sometimes the only thing we are even able to do is pray for the opportunity to do the thing we want to do. Notice what Paul said in Colossians 4:2-6, which says:

Continue steadfastly in prayer, being watchful in it with thanksgiving. At the same time, pray also for us, that God may open to us a door for the word, to declare the mystery of Christ, on account of which I am in prison— that I may make it clear, which is how I ought to speak.

Walk in wisdom toward outsiders, making the best use of the time. Let your speech always be gracious, seasoned with salt, so that you may know how you ought to answer each person.”

Paul understood that even when he wanted to preach the gospel, he still needed God to first open the right doors for him so this was even an option for him. 1 Peter 3:15 (NIV) also says, “But in your hearts revere Christ as Lord. Always be prepared to give an answer to everyone who asks you to give the reason for the hope that you have. But do this with gentleness and respect . . . .”

Paul and Peter knew that the gospel was often best received when people asked them questions, so they encouraged us all to be ready for those opportunities. Likewise, in other areas of our lives, there will be times where all you can do is pray, but when God opens that door to the opportunity you have been asking about, you will miss that opportunity if you are not prepared to act.

If you are ready to act and the door is open, oftentimes this is God saying now is the time.

4. If You Have Been Waiting Only Because of the Risk Involved, Oftentimes God Is Saying Now Is the Time

Sometimes the only thing holding up back from walking through an open door is the unknowns past that door frame. We often say things to ourselves like, “Yes, the door is open, but who know what is 10 feet past that door? And then after that first 10 feet, what will happen 1 mile down the road? And then what will happen 1 year down the road?” As we sit their thinking about all that we don’t know about the future, we often end up just watching open doors close in our faces because we got frozen in fear.

As Paul said to Timothy, “For this reason I remind you to fan into flame the gift of God, which is in you through the laying on of my hands, for God gave us a spirit not of fear but of power and love and self-control” (2 Timothy 1:6-7).

5. When Acting Is What Will Bring God the Most Glory, This Is a Sign God Is Saying Now Is the Time

Life will always be really confusing. But one way to simplify things is to ask yourself, “What will bring God the most glory?” When you can answer that question, you will then know exactly what God wants you to do.

So if doing something right now that you have been delaying doing would bring God more glory than continuing to not do this thing, then this means God is telling you now is the time to do it. As Paul said in Philippians 3:7-8, which states:

But whatever gain I had, I counted as loss for the sake of Christ. Indeed, I count everything as loss because of the surpassing worth of knowing Christ Jesus my Lord. For his sake I have suffered the loss of all things and count them as rubbish, in order that I may gain Christ . . .”

Paul saw his life through the singular lens of pleasing God. When we view everything through this lens, it simplifies our choices greatly. When in doubt, just ask yourself, “What will bring God the most glory?” When you can answer that, you will know exactly what God wants you to do.