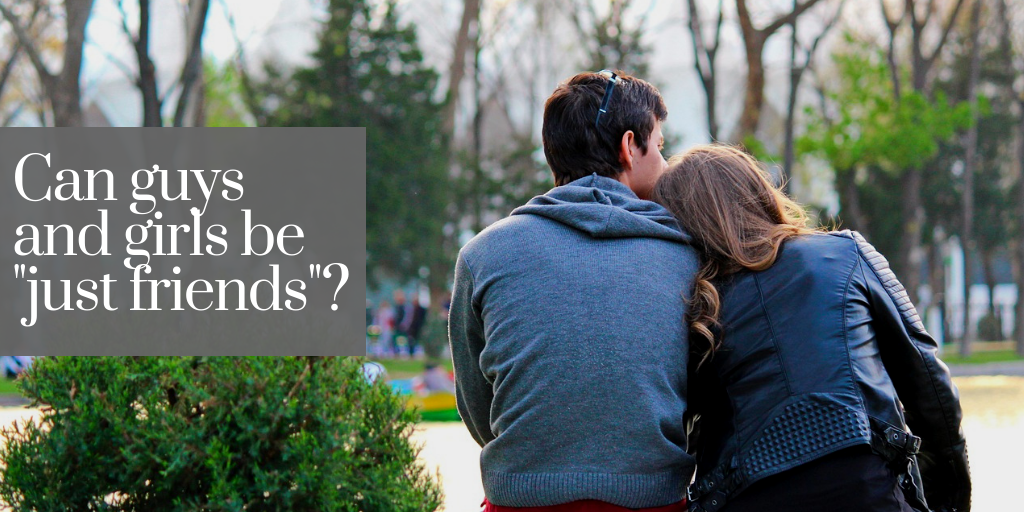 In short, I have not found a Bible verse yet that explicitly answers this question. So please note much of this article is simply my best application of biblical principles. I do not intend to speak in absolutes here.

To proceed, therefore, I plan on sharing what is possible, what usually happens in real life, and what should be done because of the differences between what is possible and what is likely to occur.

Yes, Single Christian Guys and Girls Can Be Just Friends

But again, that’s really not the question. The question at hand is really about two single people’s ability to remain friends and not start liking each other as something more than friends. Here again I believe the straight forwards answer is that there’s no biblical evidence to say that single guys and girls do not possess the ability to remain just friends.

To staunchly cling to the lie that there’s no difference between friendships of the same gender and friendships between opposite genders is unloving and naive.

If a Christian Guy and Girl Are Close Friends, Usually They Like Each Other or One of Them Likes the Other

While I do believe men and women can be “just friends,” I also believe that usually this is not the case. What normally happens, especially when a guy and girl become “close friends,” is that they either both secretly like each other or one of them likes the other even though the feelings are not mutual.

Usually both the guy and girl will adamantly say, “No, really, we are just good friends.” In reality they both know what is happening. It’s not impossible for a true friendship to occur with no romantic interest, but it really is unlikely. Most of the time one person does just want a friend while the other person wishes there was more. Because they know they are the only one with the crush, they simply remain friends rather than lose all contact. They just take what they can get. So the two keep getting closer and closer but for two very different reasons. The one person is enjoying the friendship while the other person is thinking that they are nearing closer and closer to a romantic relationship.

We know from real life there is always an extra component between singles of the opposite sex. But this is not only self-evident, it is also recognized in Scripture. For example, Proverbs 30:18-19 it states, “There are three things that are too amazing for me, four that I do not understand: the way of an eagle in the sky, the way of a snake on a rock, the way of a ship on the high seas, and the way of a man with a young woman.” Feelings between single men and women are just complicated. You can’t get around this. In C.S. Lewis’ book The Four Loves, he talks a lot about friendship. When it comes to friends of the opposite sex he states:

Because of that, I think it is a good rule of thumb to not be close friends with the opposite sex unless you are romantically interested.

If You Are Not Romantically Interested in Someone, You Should Not Be Close Friends Because They Probably Like You as More Than a Friend

This is really just my opinion. This is not a firm command in the Bible. But the reason I believe this is wise advice is because usually the most loving thing to do is to be cautious that you are not hurting someone for your own selfish desires. If you just want a friend but this person likes you as more than a friend, the loving thing to do is to put up boundaries so you are not leading this person on and using them for your own benefit.

If you are romantically interested and you are not sure if you would want to date this person, then becoming better friends is a good idea. There’s nothing wrong with being close friends if you both are single. However, again, usually singles of the opposite sex cannot remain “just friends” for very long. There’s nothing wrong with moving from friends to a dating couple, but you should just be aware of the special dynamic that will be there between a single guy and girl in friendship.

Even if you wish you could be just friends, you have to accept that God made men and women with the ability to have feelings for one another in ways that go beyond friendship. You wouldn’t have to worry about this with a close friend of the same of the same gender. But if you have a close friend of the opposite gender you must not pretend like there isn’t an extra dynamic at play between you two.

Notice what Paul says to the younger man Timothy in 1 Timothy 5:1-2, “Do not rebuke an older man but encourage him as you would a father, younger men as brothers, older women as mothers, younger women as sisters, in all purity.”

It’s interesting to me that only after “younger women” does Paul add on an extra word when instructing young Timothy. He mentions encouraging older men as fathers, younger men as brothers, and older women as mothers. But when it comes to younger women, women who are single and around his age, Paul says he should treat them as sisters “in all purity.”

I don’t think Paul was just talking about sexual purity. I think he was saying to be pure in all your interactions with the opposite gender. Don’t lead them on emotionally. Don’t use them to make yourself feel better. Don’t pretend you don’t know they like you when you clearly know they do. Treat them “in all purity.”