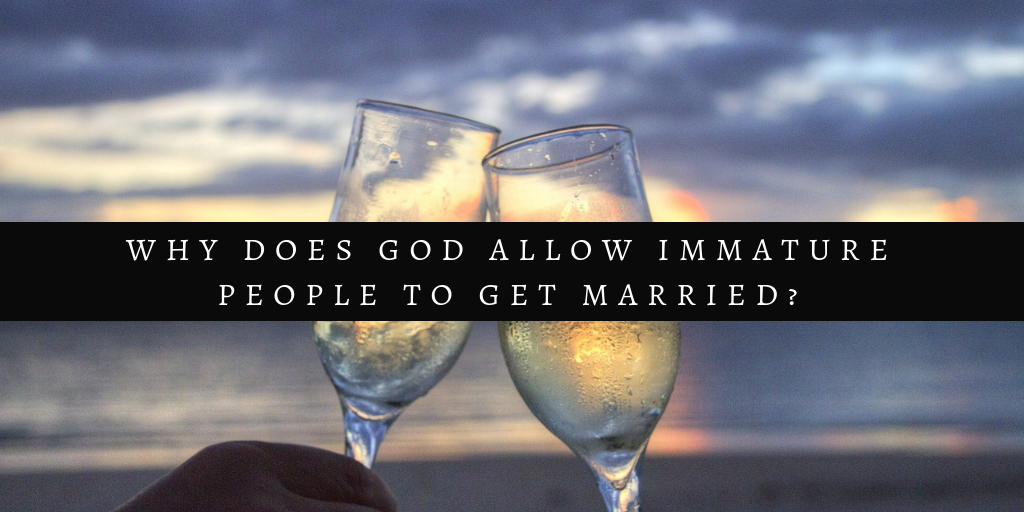 In one of my recent videos called 3 Signs God Is Keeping You Single, one of the points I made there was that God will often keep people single if they are too immature to handle a godly relationship. As Matthew 7:11 states, God only gives “good gifts” to his children.

This is a great question. As I discussed in that article, certainly not everyone is single because they are not mature Christians. Marriage is not the reward for loving God. Sometimes we just don’t know why God keeps some people single and allows others to get married.

With that said, I would now like to dive more deeply into this follow up question of “Why does God allow disobedient people to get married?”

The first point to make here is that any question about God’s will is always multilayered. In Scripture there are two different types of “God’s will.” In one sense, God has a sovereign will that he has planned from the beginning of time. In another sense, however, you are disobeying God’s will when you do things that God does not want (sin). These two “wills of God’ are called “God’s sovereign will” and “God’s will of command.”

In the context of relationships, therefore, you must define what you are talking about when it comes to “God’s will being done” in your life. I talk about this in-depth in my article/video Does God’s Will Always Happen in Relationships? so I won’t go into this too deeply here.

So in this article, we are really asking, “Why does God sovereignly allow some people to get married who are breaking his will of command?” In other words, if God is really in control of who gets married and who doesn’t, why doesn’t he only allow obedient Christians to experience the blessing of marriage and keep everyone else single?

One reason it is not accurate to say that “All married people are following God and all unmarried people are not following God” is because God really does allow people to choose to be married. The reason people who are having premarital sex, not going to church, and totally living a sinful lifestyle often get married is because they choose to. That’s the simple answer.

So why would I argue that God sometimes keeps people single who are too immature to get married? Why can we attribute God giving marriage to some and people choosing marriage themselves at other times? In short, God alone can give you a blessed, Christian marriage. But you can certainly choose to marry whoever you want. It just won’t be a blessed Christian marriage unless God gave it to you.

Proverbs 19:14 explains, “House and wealth are inherited from fathers, but a prudent wife is from the Lord.” Only God can give you a godly husband or wife. In other words, you are free to choose to break God’s will of command. You are free to disobey God and marry someone who is not living for God.

The same truths can be seen in salvation? When people talk about God’s sovereignty and man’s free will, usually the argument gets brought back to salvation. Does God elect people to be saved or do people have to freely receive the gospel? This is certainly not the article to answer that question. But whatever answer you choose to give, it would have to be in line with the two biblical truths: God is responsible for salvation and man is responsible for sin.

When you apply these biblical truths regarding God’s sovereignty and man’s free will, you can also say that only God can give the blessing of a Christian marriage but man can certainly choose a sinful relationship and marry whoever he chooses. It seems to me Proverbs 19:13-14 are two verses paired together to prove this point:

A foolish son is ruin to his father, and a wife’s quarreling is a continual dripping of rain.
14 House and wealth are inherited from fathers, but a prudent wife is from the Lord.”

In other words, not all marriages are good marriages. Not all spouses will be a blessing in your life. In Proverbs 19:13 we see how a quarreling wife is a curse. But when Proverbs 19:14 shows that a wife can be a blessing, it makes sure to attribute credit to God alone.

So why are immature Christians and non-Christians able to get married sometimes while Christians who are earnestly seeking to love God often remain single even though they could be blessed with a marriage? Because anyone is free to marry anyone they want. But only God can give you a blessed Christian marriage.

If God Allows You to Marry While You Are Rejecting Him, There Are at Least Three Reasons He Would Allow This

If God loves us, why does he allow us to sin? Why does he allow people to choose ungodly marriages? While God does not cause sin, he is sovereign over sin. So even when he allows people to do things that break his will of command, he still has purpose in it all. Here are three ways that God can use marriage unions formed even when those people were not living for him.

One reasons God gives people good things even when they are living sinful lives is so that they might be drawn to him because of his kindness. The Bible states that everything good on earth is because of God, “Do not be deceived, my beloved brothers. Every good gift and every perfect gift is from above, coming down from the Father of lights . . .” (James 1:16-17).

Theologically this is called common grace. Saving grace is when someone’s eyes are open to the gospel and they receive Christ as their Savior. Common grace is when God provides food, water, health, marriages, children, a home to live in, and everything else that is good on earth. One reason God shows common grace to the world, even though none of us deserve these gifts, is so people have the opportunity to see the goodness of God and turn to him, “I have loved you with an everlasting love; I have drawn you with unfailing kindness” (Jeremiah 31:3).

So why does God allow people to get married even when those people are not living for him? One reason is that marriage is a good gift and is given through God’s common grace. God allows sinners to eat, breathe, and marry because God is loving and blesses people with good that they don’t deserve in hopes that they will turn to him.

Marriage will not work well without God. Certainly non-Christian husband and wives can stay together and even enjoy their marriages at times. But usually a marriage with two people who do not love God will be a disaster. God might allow some people to get married to show them that the happiness they seek is not found in marriage.

This idea can be seen in the parable of the prodigal son in Luke 15:11-32. Why did the father give the son the inheritance? Why did the father give him something good even though the son was acting evil? I believe he gave the son the money and let him leave in hopes that the pain he would cause himself would bring him back as a humble son. The plan worked. Because the father let the son wound himself with wild living, the son humbly returned to the father.

Likewise, God allows some people to choose marriage even when they are living an evil life in hopes that the pain they will cause themselves will cause them to come humbly to God.

Many failing marriages have been the catalyst to cause people to cry out to God in faith.

Getting married is spiritual and practical. You do not need to be spiritual to meet, date, and marry someone. And just because you are spiritual does not mean you will be successful in meeting, dating, and getting married.

Some non-Christians are just better at engaging in relationships and have better social skills than some Christians. Not sinning, living for God, going to church, memorizing Scripture – these are obviously eternally important but they are separate from the relationship skills needed to mingle and meet people. In short, you don’t have to be a saint to know how to interact with the opposite sex and get married to someone.

Proverbs 19:15 states, “Slothfulness casts into a deep sleep, and an idle person will suffer hunger.” If you are following God but not being proactive in relationships, your relationship with God will be great but you will still be single. If you want to be married you will need to focus on your walk with God and take practical steps in your pursuit of a relationship.