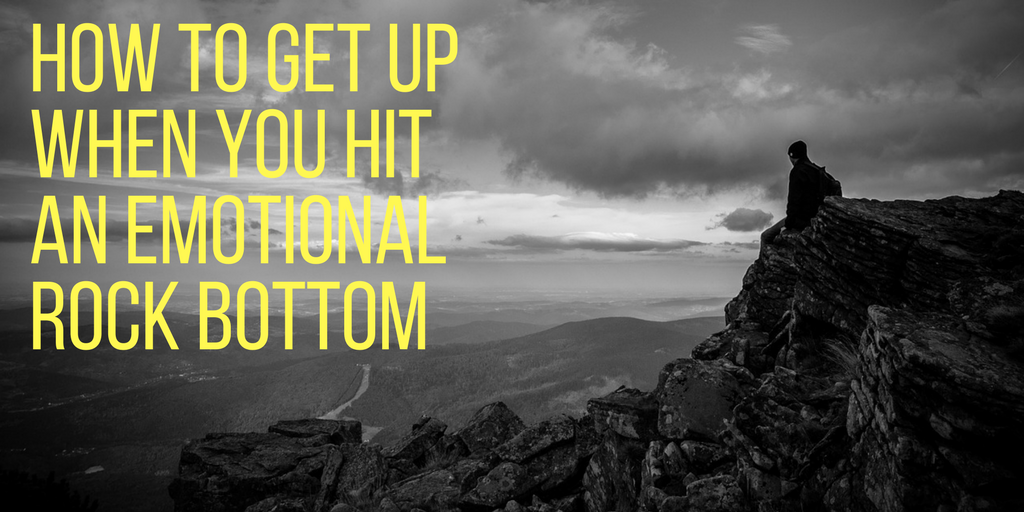 When you hit rock bottom emotionally, you have a choice to make. Is this going to be your end, or is this going to be the start of a new beginning with Jesus? If anyone knew the feeling of utter despair, it was Peter. He truly hit his lowest point when he denied Jesus.

In the days following his dramatic fall, surely he thought back to that time when Jesus said, “And I tell you, you are Peter, and on this rock I will build my church, and the gates of hell shall not prevail against it” (Matthew 16:18). Laying there on the cold hard floor of rock bottom, those amazing words of Jesus must have felt so distant.

Thankfully there is John 21. Here Jesus started the process of rebuilding Peter from the ground up. So what happened that transformed Peter’s lowest point in life into his launching pad? How did Peter get up from rock bottom and become the rock on which Jesus started his church?

Stay Around People Who Know the Voice of Jesus

Pain has a way of warping our perspective. When the tears are overwhelming your eyes, it is impossible to see clearly. Therefore, one crucial first step to take to rise from rock bottom is to stay around people who can see Jesus even when you can’t. Notice when Jesus yelled to them from shore, it was not Peter who recognized his voice:

4 Just as day was breaking, Jesus stood on the shore; yet the disciples did not know that it was Jesus. 5 Jesus said to them, “Children, do you have any fish?” They answered him, “No.” 6 He said to them, “Cast the net on the right side of the boat, and you will find some.” So they cast it, and now they were not able to haul it in, because of the quantity of fish.7 That disciple whom Jesus loved therefore said to Peter, “It is the Lord!” (John 21:4-7)

John told Peter it was the Lord. When we are at our lowest, we need people like John in our boat to give us a biblical perspective on life. We need friends to preach truth to us when we are fighting the lies in our head. We need people we can trust when we know we can’t trust ourselves because the depression is contaminating our thoughts. Jesus is always calling out to us, but sometimes we need the help of others to hear what he is really saying.

This whole story in John 21 about Jesus producing a miraculous amount of fish might just seem like Jesus being Jesus. But for Peter, this event had double significance. You see, Jesus was taking Peter back to the beginning of their relationship. He was reminding his broken disciple of how this whole thing started in the first place.

So much had happened since Peter initially met Jesus. Peter had become a celebrity of sorts. He casted out demons (Luke 9:1-6), made bold proclamations he was commended for (Matthew 16:17), and he seemed to be in the inner circle of the coolest guy around. But to restore Peter to usefulness again, Jesus had to remind Peter of how their relationship began – with Peter listening to Jesus. Luke 5:4-11 is strikingly similar to John 21, but Luke 5 takes place at the beginning of Jesus and Peter’s relationship.

4 And when he had finished speaking, he said to Simon, “Put out into the deep and let down your nets for a catch.” 5 And Simon answered, “Master, we toiled all night and took nothing! But at your word I will let down the nets.” 6 And when they had done this, they enclosed a large number of fish, and their nets were breaking. 7 They signaled to their partners in the other boat to come and help them. And they came and filled both the boats, so that they began to sink. 8 But when Simon Peter saw it, he fell down at Jesus’ knees, saying, “Depart from me, for I am a sinful man, O Lord.” 9 For he and all who were with him were astonished at the catch of fish that they had taken, 10 and so also were James and John, sons of Zebedee, who were partners with Simon. And Jesus said to Simon, “Do not be afraid; from now on you will be catching men.” 11 And when they had brought their boats to land, they left everything and followed him. (Luke 5:4-11)

Sound familiar? By recreating in John 21 what happened in Luke 5, Jesus clearly had an agenda. It was as if when Peter caught the fish in John 21, after all the failures in his past, Jesus was saying, “Do you remember Peter? Do you remember how this whole ministry started? Do you remember where the real joy in life comes from? It’s all about following me.”

Luke 5:11 says that Peter left everything and “followed him.” When we get to John 21:19, Jesus said “Follow me.” This is no coincidence. Jesus knew that to lift Peter out of rock bottom, Peter had to remember the key to life. When Peter followed Jesus, amazing things happened. When Peter stopped following, rock bottom was right around the corner.

“Follow me” is the most beautifully simplistic and yet deeply profound command. Whether you are on the mountain top or in the valley, within those two words lies everything you need to know. Jesus told Peter what he is telling us all, “When you don’t know what to do, follow me. When you’ve failed again even after you promised me you wouldn’t, follow me. When you’re at the lowest point in your entire life, follow me.”

Rock bottom is a terrible place to be. It’s also the best foundation to build on. But you have to follow Jesus.