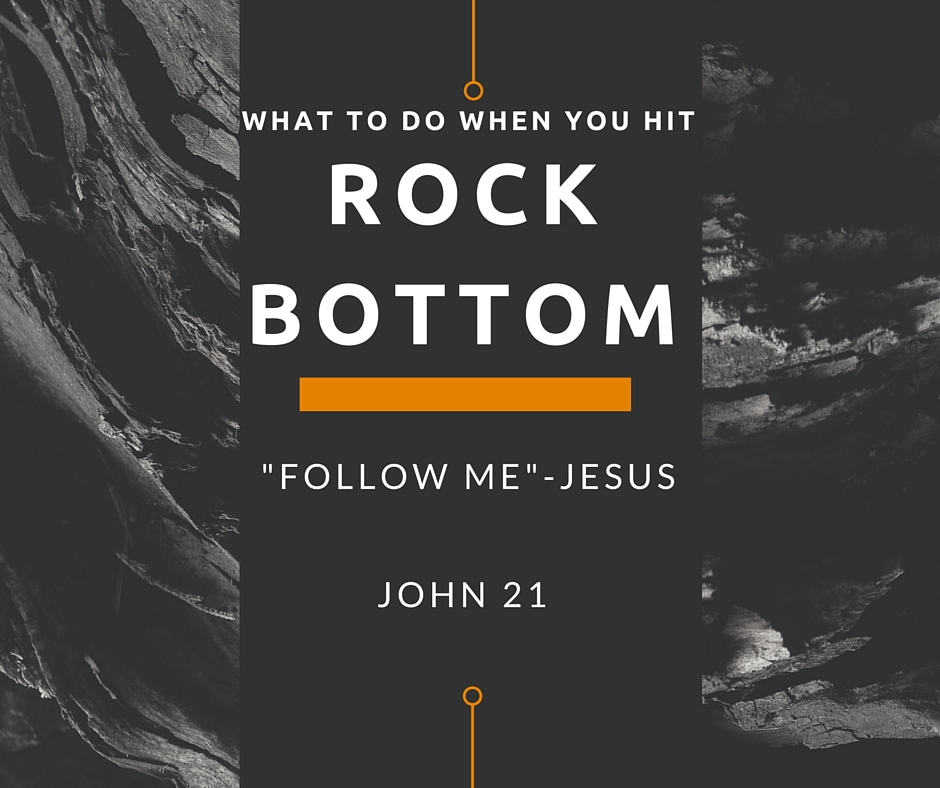 And the Lord turned and looked at Peter. And Peter remembered the saying of the Lord, how he had said to him, “Before the rooster crows today, you will deny me three times.” And he went out and wept bitterly. – Luke 22:61-61

If anyone knew the feeling of being at the lowest point of life, it was Peter. Peter truly hit rock bottom when he betrayed Jesus. But the thing that Peter learned, the thing that we all must learn when we are at our lowest, is that rock bottom is the best foundation to build upon.

In John 21, Jesus started the process of rebuilding Peter from the ground up. Peter was broken from his failures, demoralized over his betrayal, and totally confused about the future because of the mistakes of his past. Surely he must have remembered the time where Jesus changed his name from Simon to Peter, which means rock, and told him “…you are Peter, and on this rock I will build my church, and the gates of hell shall not prevail against it” (Matthew 16:18).

Little did Peter know that to become the rock on which Jesus would build his church, Jesus was going to let Peter hit rock bottom. So what happened in John 21 that began the process of turning Peter’s lowest point in life towards redemption and being used to start the New Testament Church as we know it?

When You Hit Rock Bottom: Stay Around People Who Recognize Jesus

When you don’t know what to do, you naturally resort back to what you’ve always done. Peter figured his life of serving Jesus in significant ways was over, so the only thing he knew to do was to go back to his old life, to fishing (John 21:7). Most of us have the same reaction. When we don’t know what to do, we usually run back to doing what we did before we knew Jesus. When we hit rock bottom because of our failures, we usually give up on our new life in and head back to the old.

Thankfully for Peter, even though he was at the lowest point of his life, the people around him could still recognize Jesus on his behalf. Sometimes we are so low and we become so down on ourselves, we can’t see our circumstances clearly and we need the eyes and ears of others.

When Jesus yelled to them from shore, it was not Peter who recognized the voice of Jesus, it was John (John 21:7). John told Peter it was the Lord. When we are at our lowest, we need people like John in our boat to give us a clear perspective on life. We need those people who can recognize Jesus and point us to him.

When You Hit Rock Bottom: Go to Jesus as Fast as You Can

John 21:7 explains, “That disciple whom Jesus loved therefore said to Peter, “It is the Lord!” When Simon Peter heard that it was the Lord, he put on his outer garment, for he was stripped for work, and threw himself into the sea.”

When Peter realized he had an opportunity to be around Jesus again, he seized it with all his might and swam as fast as he could to his Lord. For all of Peter’s failures, Peter’s passion for Jesus was not overcome by his own pessimism, shame, and self-loathing.

When we hit rock bottom because of personal failure, it’s so easy to wallow in our self-inflicted pain. When we sin and betray Jesus, it’s right to grieve greatly over our mistakes. But grieving that ends with grieving and not with repentance is not from God (2 Corinthians 7:10). Eventually we have to realize we have more opportunities to be with Jesus than the ones we’ve previously failed in. Peter was at his lowest point, but when Peter realized Jesus was still pursuing him, Peter responded and went to his Lord as fast as he could.

When You Hit Rock Bottom: Receive Jesus’ Restoration, Even When It’s Painful

Restoration hurts. Repentance hurts. Receiving the loving correction of Jesus Christ hurts (Hebrews 12:11). But for Jesus to rebuild the house that we destroyed, he takes us to rock bottom and starts the painful rebuilding process. Peter did not let his shame or the pain of God’s discipline keep him down. Instead he responded to Jesus, he repented, and he allowed Jesus to wash away his sins and reinstate him into the service of God’s army.

When we hit rock bottom, we must be willing to receive discipline, even when it’s painful. The way to recover from personal failure is not to act like your sins were not that bad. The way to be rebuilt is to recognize you are at rock bottom because of your own sinful choices, and then you must be determined to rely on the grace and direction of Jesus Christ, no matter how painful his plan may be to pull you up out of that pit.

It’s going to hurt when Jesus completely remakes you. Don’t run away. Like Peter, run towards Jesus.

When Peter did not know what to do, Jesus came and told him with extreme clarity, “Follow me” (John 21:19). It’s a beautifully simplistic and yet deeply profound command, “Follow me.”

When you follow Jesus, you are going to be serving his sheep. When Jesus was rebuilding Peter, he gave Peter a specific mission, “Feed my lambs…Tend to my sheep…Feed my sheep” (John 21:15-17). Likewise, it should be no surprise that when we are at our lowest, Jesus will come along and tell us to follow him and serve his people.
The way God tells us to live our life, at its simplest, can be boiled down to two objectives: Love God and love people (Matthew 22:38-39).

When You Hit Rock Bottom: Build on Rock, Not Sand

To obey Jesus, we need to come to the end of ourselves and rely completely upon his grace (John 15:5). While many of us come to this point in more painful and dramatic ways, we all need to hit rock bottom before Jesus will start building a house that will last.

May we, like Peter, respond to Jesus in the midst of our pain that we might not be house built on sand but a house built on rock, leaving our personal failures and disobedience behind as we follow Christ.