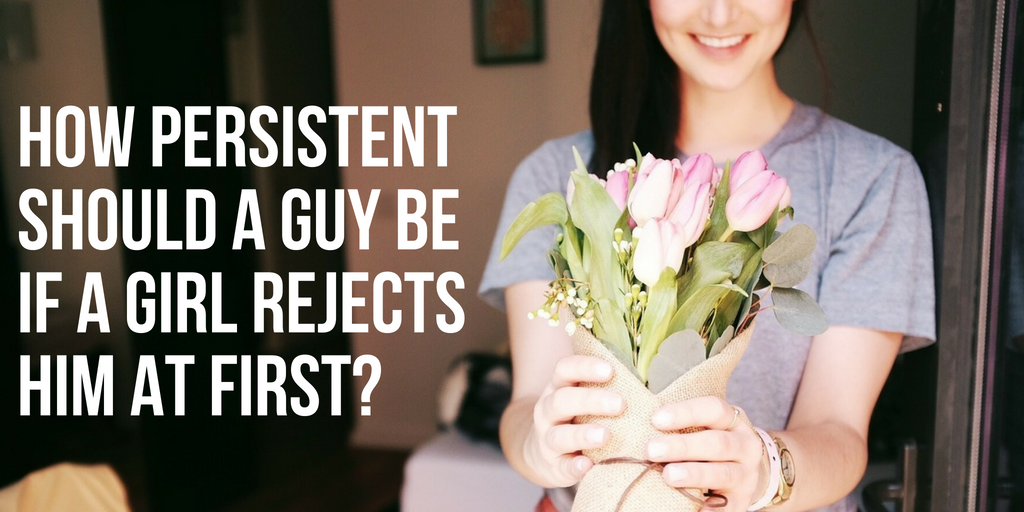 How persistent should a Christian guy be if a girl rejects him?

My first inclination is to tell guys to respect what she says and just move on. I hear so many stories of guys hanging on to hope when they really shouldn’t. I know women who have had guys be persistent even after a girl says no and eventually it got really creepy. So in most cases, I believe a guy should pursue a girl one time and clearly express his feelings for her and then he can move on one way or the other because he knows he tried.

So in this article I will do my best to give guys some advice on “How persistent should a Christian guy be in pursuing a girl if she rejects him at first?”

I think the wise thing to do at first is to try to figure out why this girl has rejected you before you keep persistently pursuing her. If she is scared of commitment and doesn’t want to get hurt, then she might need you to be persistent to prove to her that you really like her and are not just playing games.

However, if she rejects your advances and gives you a moral or spiritual reason for not wanting to be with you, you should respect that. If she needs time with God or feels you are not spiritually compatible, don’t become a temptation for her.

Sometimes persistence towards a girl is actually rebellion towards God. There’s nothing wrong with asking God if he wants you to be with a certain girl. However, when God gives you a clear “No” and then you keep pursuing God about this because you are basically demanding a “Yes,” this can become offensive to God and he might discipline you for your stubbornness.

One example like this is that of Balaam. Balaak wanted Balaam to get God to curse the Israelites. When Balaam sought God’s counsel about cursing the Israelites, God said, “You shall not go with them. You shall not curse the people, for they are blessed” (Numbers 22:12). God was not mad at Balaam for asking this question originally.

However, when Balaam came again to God with the same request even though God had given him a clear answer already, this was when Balaam started to get into trouble with God (Numbers 22:15-22). In the end, Balaam ruined himself by persistently seeking what he wanted while rejecting what God had clearly told him.

So if you are considering pursuing a girl and God gives you a clear “No” because of sin or a clear biblical reasons you two should not be together, then you are actually going to hurt yourself by being so persistent. If a girl sights a spiritual or moral reason for not being with you, do not be persistent.

You will need some social maturity here. If you ask her out and she says “No” but then she makes eye contact with you one day, don’t think this changes anything. But if she comes and sits next to you at church when she could have say anywhere else, she might be conflicted inside.

My point here is that there is a strong and obvious “No” when someone really does not like you like that. If a girl avoids you in the hallway or seems annoyed when you speak to her, do not pursue her. However, if a girl rejects you when you ask her out but she continues to want to be around you and build a friendship, there could be reason to be persistent down the line.

Look at her past. Is she saying no because she really doesn’t like you or because she actually likes you so much she is afraid of getting hurt again? This is hard to know so you should be patient when trying to figure this out. Don’t be prideful and assume her “No” is not genuine.

One scenario that I’ve seen is when a guy asks a girl out, she declines, but she also states she would like to get to know him more. In this context she does not want to date you or be romantic at all, however, she is open to building a friendship and open to feelings building later.

If a girl leaves the door open for friendship, walk through it. Don’t be persistent in dating her if she says she does not want that. But take what you can get if you really like her. Build a friendship and then if things keep progressing in the right direction, perhaps you should show some persistence and try to date her again.

Don’t be stubborn and don’t let your ego get in the way. If a girl rejects you at first but then down the line starts to like you, don’t reject her just because she rejected you first.

One married couple that are friends with Bethany and I had this happen to them. The guy asked her out and she politely declined. However, over the months they became better friends just by being in the same circle of people at church. One day he went out of his way to help her with something and something clicked inside of her and she realized what a great person he is.

After awhile he sensed something had shifted with her and so he went for it again. They dated and were married shortly after that. So if the girl’s feelings change, a guy should pursue the girl again if she said “No” before.

A Guy Should Not Be Persistent for More Than Two Times

In closing, I think it’s a good rule of thumb for a guy to not be persistent more than twice. If a guy pursues a girl in a clear way and she reject him twice, I believe he’s pressed it far enough. After that he will most likely be perceived as a creep.

The key here for the guy is being “clear.” I’m not talking about vague and passive advances. You can be a little more persistent if you are trying subtle ways to pursue a girl. But if you have a DTR or you clearly express your interest in her and you do this more than twice, I think you are off base. You run the risk of being a creep on your second attempt. I think on your third attempt it is pretty much a guarantee you will look like a creep in most cases.

But, obviously the Bible does not give us commands here. So this was just my best advice on “How persistent should a guy be with a girl?”

Ladies, what do you think? Was my advice good or totally off? What advice would you give guys about being persistent without being creepy or disrespectful? Let us know in the comments section below!