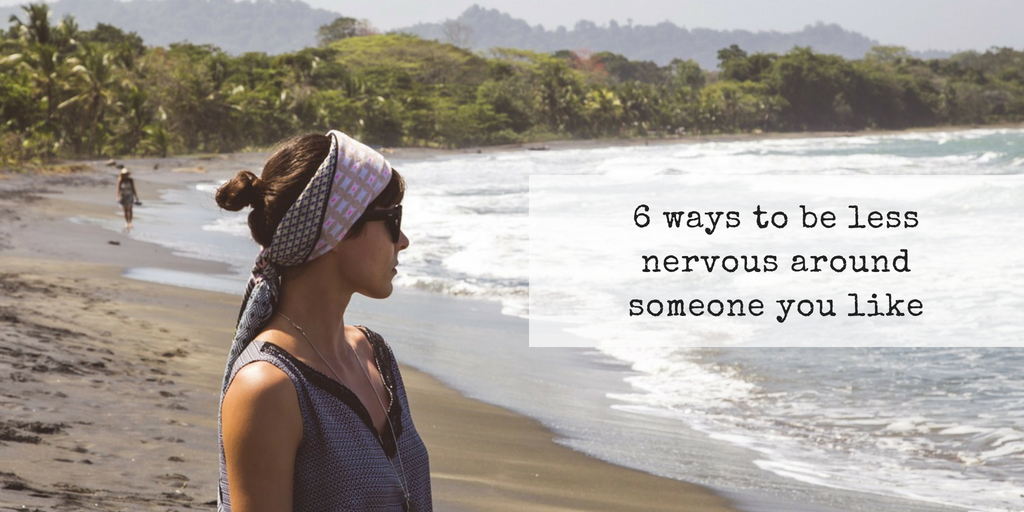 Are you a Christian single who gets really awkward around the girl or guy you like? Do you wish you could be in a Christian relationship but you get too nervous anytime you are around someone you like? What Christian dating advice is there for people who struggle with anxiety and awkwardness around guys or girls?

In this article I’m going to share 6 tips for Christians who want to relax and be less nervous around other guys and girls.

If You Want to Be Less Awkward Around Guys or Girls, Be Around Guys and Girls More in Group Settings First

The first time I put on a pair of ice skates I was a wreck. The same thing happened when I was learning to ride a bike. When I started rock climbing in college, my legs were shaking and my butt was sticking out like I was doing some inappropriate dance move.

What’s my point? I’m always awkward at things when I first start. Everyone is. I eventually became the captain of my high school hockey team. I eventually did some cycling races. And while I never became an elite rock climber, I did get comfortable enough to keep my hips close to the wall like you are supposed to.

The first time I got a girl’s number at the skating rink in junior high, I was too nervous to call her. My best friend finally ridiculed me enough to where I dialed the number and she answered. But I got so nervous I hung up about 60 seconds into the call and I never called her back.

By the time I was 20 and started calling my now wife, I was a little nervous but I was no longer paralyzed with fear. Like everything in life, you will always be awkward around the opposite sex if you never get any practice.

This is why groups of friends are so helpful. Being in a group of people your age allows you to get comfortable with the opposite sex. Hanging out with groups of friends, both guys and girls, is like relationship training wheels. Eventually you will get good enough to venture off on your own without being so awkward around the girl or guy you like.

I love going to parties with my wife because I allow her to do most of the social heavy lifting. I don’t have a high capacity for small talk and social gatherings. I enjoy them every now and then but it’s not my main gifting. My wife is much better than me at hosting parties and going to parties. When I team up with her it makes these situations much easier for me too.

Your friend’s confidence will rub off on you and if you feel like you are getting into a social jam or don’t know what to say, your friend can chime in and bail you out.

Two are better than one, because they have a good reward for their toil. 10 For if they fall, one will lift up his fellow. But woe to him who is alone when he falls and has not another to lift him up!” (Ecclesiastes 4:9-10)

If You Want to Be Less Awkward Around a Guy or Girl You Like, Don’t Plan Too Much

When humans are afraid, one coping mechanism we have is to plan out every detail around the thing we fear. When you are anxious about your first day of work at the new job, you may plan every detail of your first day. You do a test drive the day before so you know what the traffic is like. You lay out your clothes, pack your lunch, pack your bag, and set five different alarms to make sure nothing will go wrong.

Planning is good for instances like the above but when it comes to relationships there comes a point where you can plan too much. If you try to plan what you will say, when you will say it, and how your facial expression will be in every moment around the guy or girl you like, you will actually be less comfortable.

When you interact with someone but you are thinking about your plan on how you should interact the whole time, this will produce a very unnatural interaction with this person. If you don’t learn to live in the moment and you over analyze everything, you will actually cause more stress and awkwardness with the opposite sex. As C.S Lewis put it, “You will never make a good impression on other people until you stop thinking about what sort of impression you are making.”

Psalm 56:3 states, “When I am afraid, I put my trust in you.” Planning is not bad. But planning will not take away fear. Trust in God and once the time comes to interact with the opposite sex, engage and don’t think about how you are engaging.

Humbly Acknowledge Your Flaws Rather Than Pridefully Pretending to Be Perfect

One mistake we make when interacting with the opposite sex is trying to not make any mistakes. When you want someone to like you, our approach is usually to put our best foot forward and to make ourselves look the best way we can. The problem with this is that we all know we are flawed and make mistakes. When you are committed to looking perfect you will feel nervous about messing up and saying something stupid.

One way to cut through this tension is by accepting that you are flawed and will eventually make mistakes. Eventually you will say something in the wrong tone, accidently say something offensive, or have a bad day. Rather than hide this from people, when you are humble and honest about yourself this puts everyone at ease.

I was just preaching at a men’s crisis center. The audience was full of guys just out of prison, men struggling with drug addiction, and people who have lived very hard lives. As I was preaching, my voice totally cracked and it squeaked like I was in the middle of puberty still. Rather than be embarrassed I instantly started laughing and mimicked myself. We all laughed and in the end it actually helped my sermon because it put everyone at ease a bit when I could poke fun at myself.

People enjoy humble people because they are easy to be around. Prideful people cause others to feel judged and then everyone walls up because everyone is worried about looking imperfect in front of others. “Before destruction a man’s heart is haughty, but humility comes before honor” (Proverbs 18:2).

If You Want to Be Less Nervous Around the Opposite Sex, Address the Fear of Man in You and Any Idolization

While it’s completely normal for a guy or girl to get a little nervous or awkward around someone they like, there is a fear of the opposite sex that goes deeper than this. If you really fear the opposite sex and totally shut down around someone you are interested in, it could be a sign that you are struggling with idolization and the fear of man.

As Christians, the more secure we become in our identity in Christ the less we fear man. When we know God loves us, that we are his child, and that our identity is rooted in God rather than in what other people think about us, this will give us all the security we need. Romans 2:29 (NLT) explains that when our hearts are changed we will focus more on making God pleased than being a people pleaser:

No, a true Jew is one whose heart is right with God. And true circumcision is not merely obeying the letter of the law; rather, it is a change of heart produced by the Spirit. And a person with a changed heart seeks praise from God, not from people.”

If You Want to Stop Being Nervous Around the Opposite Sex, Focus More On Others and Less On Yourself

Lastly, one of the best ways to be less awkward and nervous around the guy or girl that you like is by focusing less on yourself and more on the people right in front of you. When we have the mindset of focusing on others and serving the person in front of us, this allows us to be engaged in the moment.

We get nervous and awkward partly because we are under the lie that the world revolves around us. When we think, “Everyone is looking at me” or that everyone notices your slightest movements or mistakes, this can be a paralyzing mindset.

The reality is that most people are thinking about themselves. Most people walk into a room and think most people are looking at them. Pride makes people think other people are more focused on them than anything else. In reality they are not.

When you go into the world with an “other” mentality, you will create less anxiety in yourself and you will be a breath of fresh air to the people you come in contact with. Most people are thinking about what they will say next rather than listening to what others are saying. If you engage the person right in front of you rather than thinking about yourself or all the other people who might also be looking at you, this will help you live in the moment. It will help you not waste your life wondering what others are thinking.

So if you want to be less awkward and nervous around the opposite sex, try to serve them, listen to them, and focus more on them rather than yourself.