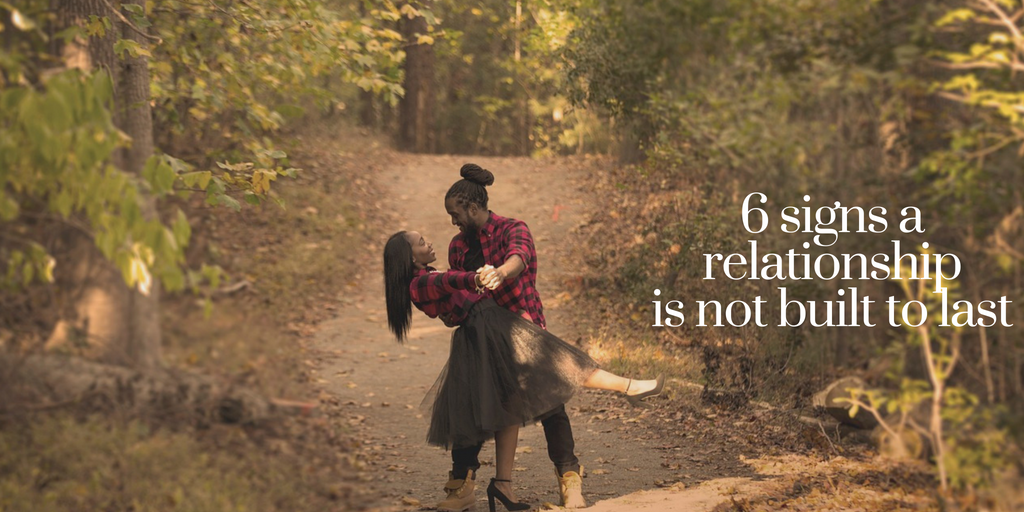 Don’t you wish you could know the future of your relationships before they even start? Well, we obviously can’t and realistically this would take a lot of the joy out of our relationships. However, if a relationship is not built to last this would be nice to know. While we can’t see the future, we can see Christian dating red flags in the present.

So what are some Christian dating red flags?

Below are 6 commons red flags and signs that a Christian relationship is not built to last. Certainly these signs are not a guarantee that a Christian couple will breakup, but these Christian dating red flags are definitely worth looking out for if you hope to guard your heart.

One red flag in a Christian dating relationship is when a couple is talking about their future together too soon of if they start openly expressing their “love” for one another very early in the relationship.

This may not seem like a red flag. After all, marriage and being in love is kind of the hope when you are in a Christian dating relationship. The problem, however, with talking about marriage and saying “I love you” too early in the relationship is that it can make people feel closer than they really are. When a relationship is more serious in your head than it is in reality, this is what leads to big hurts in the future.

It’s also a red flag if a Christian dating couple share too much too soon because this is a sign they are not taking commitment very seriously. Again, at first it might seem like a couple doing this is taking commitment very seriously, but in reality if they were they would spend more time praying and truly weighing through the reality of this relationship before making promises they might not keep.

I adjure you, O daughters of Jerusalem, that you not stir up or awaken love until it pleases.” (Song of Solomon 8:4)

Christian Dating Red Flag #2: Attraction Is the Main Reason You Are Together

One danger with physical attraction is that it can sometimes cause us to overlook red flags in other areas. You may want this person so bad you are willing to put on your blinders to all the red flags popping up in this relationship.

(For more on this topic, see How Important Is Physical Attraction in a Christian Relationship?)

Christian Dating Red Flag #3: If Someone Thinks the Other Person is “Perfect”

Another big red flag in a Christian dating relationship is when the word “perfect” starts getting used a lot. If one or both of the people involved in this relationship believes the other person is perfect, eventually they are going to get really disappointed.

You can always know how deeply you idolized someone by how angry you get at them when they fail to meet your expectations. The higher you put them on the idolatry pedestal the further it is when they finally fall. If you are over the top mad or disappointed with someone over something that does not seem that significant, it’s probably because you idolized them. Likewise, if someone hates you now when they used to be absolutely crazy about you, this is a sign they idolized you.

This trend can be seen in the media all the time. One minute everyone thinks this new famous person is the greatest thing ever. But then in a few years those headlines are all about exposing the flaws of this person. That’s what humans do to each other. Build someone up like a god, and then tear them down like a demon. It’s the cycle of idolization.

2 Samuel 13:2 says Amnon “loved” Tamar so much he made himself ill because he could not have her. When Tamar resisted Amnon he overpowered her. 2 Samuel 13:14-15 explains:

But he would not listen to her, and being stronger than she, he violated her and lay with her. Then Amnon hated her with very great hatred, so that the hatred with which he hated her was greater than the love with which he had loved her.”

Because Amnon idolized Tamar his “love” eventually turned into hatred when he realized she was not the solution to his inner yearning. This type of pattern always happens with idolatry.

So one big red flag that a relationship is not built to last is when idolatry is present which is usually expressed through this idea that someone is “perfect.”

(For more on the dangers of idolatry in Christian relationships, read What Does the Bible Say About Being Balanced?)

Christian Dating Red Flag #4: If Your Bond Is Rooted in a “Magical Season” You Shared Together

One of the main ingredients to a strong bond is shared experiences. When men go to war together, for example, they are bonded with each other in a special way for the rest of their lives. When a sports team wins a championship together, they will always have a special affection for one another. So having intense experiences with people is really great.

However, when it comes to romance, “magical seasons” can often be a mirage for a true love for one another. When a guy and girl have one magical summer together working as camp counselors, when they meet on a mission’s trip, or when they attend the same school together, often times when these seasons are over the bond between these two people fades.

It certainly does not have to be like that. I met my wife on a mission’s trip and we’ve now been married since 2008. However, we both knew we had to make sure our relationship was real and was not just artificially inflated because of the magical feelings you sometimes get when you are on the mission field in a foreign country together. We took things slow when we returned to America.

So my point is not that meeting in these ways is bad. It’s just sometimes easy to feel more connected than you really are. When a bond is rooted in a shared “magical experience”, once the shared experience goes away the relationship feelings can begin to fade too. Sometimes people get together because they want to hold onto the experience. When their relationship is more about the experience and less about the person, this is a red flag.

Christian Dating Red Flag #5: If There Is a Recent History of Non-Committal Behavior with Someone in the Relationship

As the old saying goes, one of the best indicators of the future is the past. While I believe this is a general principle that offers some wisdom, I also want to be careful to say that the past is not a guaranteed indicator of the future.

If someone has struggled with commitment in the past, I don’t think this must mean they will struggle in the future. However, it is a red flag if a guy or girl has shown a pattern of non-committal behavior recently in a past relationships.

If a guy or girl has dated multiple people at church in the last 6 months and all of these relationships ended because the guy or girl broke up with the other person, this is a red flag if you are considering entering into a Christian dating relationship with this person too (1 Corinthians 13:4-8).

Tier one issues are those doctrines which are core to salvation. In other words, if you get a tier one issue wrong, your eternal destination is in question. Issues like the divinity of Christ, the bodily death and resurrection of Jesus, salvation through faith and grace alone, and many other similar issues are tier one.

Tier two issues are those issues which do not affect your salvation or identity as a Christian. But these issues will have an impact on how you live day to day, how you conduct the church service, and how you operate as a church body. While a male pastor and a female pastor may both believe in the core truths of the gospel and thus are both true Christians, their belief in who can and cannot be a pastor are so different that coexisting in the same church would be divisive and impossible. While a Baptist pastor and a Presbyterian pastor may agree on almost everything, their disagreement over infant baptism will cause them to operate their churches very differently.

Tier three issues are those issues which do not affect your salvation, the way you live your life daily, or the way you operate your church in significant matters. Explaining the outcome of the Tower of Babel is interesting and important, but if you disagree it probably isn’t going to change the way you live your life day to day. If you believe in the five points of Calvinism but your pastor only believes in four of those five points, it’s likely this disagreement will not be insurmountable to your continued partnership.

In short, if you have a tier one difference, do not enter into a relationship with this person. If you have a tier two difference, it is probably not wise to enter into a relationship with this Christian but it might be possible if you both fully understand the challenges ahead with your theological differences. You should be able to date and marry another Christian even if there is a tier three difference.

(For more on this, see Theological Differences in Dating and Marriage.)

It is impossible to know the future. No relationship will ever be perfect. But it is also wise to not deny the obvious red flags in a Christian relationship.

Lastly, if one of these Christian dating red flags is present, it doesn’t mean you must breakup. Perhaps God is revealing this to you so you both can repent of any sin and make the Christian relationship stronger. Walk with God and obey his word. We can’t know the future, but we can prepare for it.