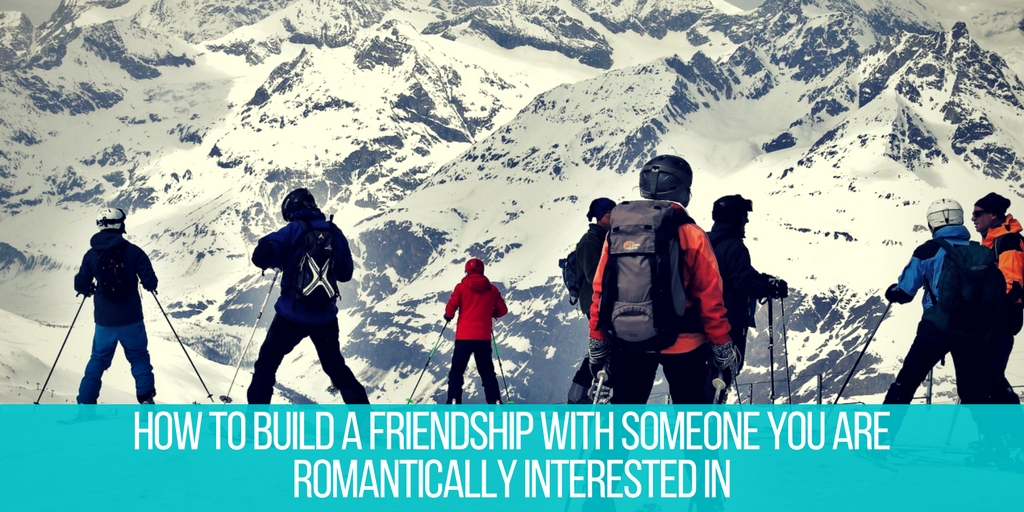 So you like someone, he or she seems like a great Christian, you want to start a relationship with this person, but as it stands right now you are nothing more than acquaintances. Maybe they don’t even know who you are.

So what should you do?

Becoming friends with someone is a great option to start the possibility of dating him or her one day. I don’t think it would be “wrong” to just ask someone out on a date. I do, however, believe that approach is not always effective and can sometimes scare people away. Friendship is oftentimes the most natural path to romance and can create one of the best foundations for a healthy Christian relationship in the future.

Secondly, I don’t think you should feel like you have bad motives if you try to become someone’s friend because you like him or her as more than a friend. In fact, I often think it is the wisest, safest way to explore the possibility of a romantic relationship. Sometimes you can become friends with someone and then get to know them enough that you are no longer interested romantically. You can sometimes save yourself a lot of relationship trouble through a healthy friendship.

But again, if you do want to be in a relationship with some, friendship is often a great first step to take. In C.S. Lewis’ book The Four Loves, he states:

Friendship is good. Marriage is good. Don’t feel bad about trying to be friends with someone as a path to dating or marriage. Don’t be fake or manipulative, but becoming someone’s friend is a natural first step to see if God wants you two to be more than friends in the future.

Friendships Revolve Around a Common Interest. Romance Revolves Around Each Other

One huge mistake when trying to become friends with someone is to focus on the relationship rather than a shared experience that will create a friendship. Friendships are always based on a common interest that binds two people together. This is why most of us over 25 don’t still have lots of friends from high school. Once we all leave that school, we lose our connection and thus the bonds in friendship are weakened.

So if you want to have friendships with people, you need to have other passions in life besides wanting a friendship. You need things that connect you with other people besides the people themselves. Ironically, those who try to live their lives regardless of other people’s approval of them are the ones who end up having the most friends. Their life experiences make bridges to other people. Those who just sit around complaining how they don’t have friends remain lonely and bored because who would want to be friends with someone who does nothing? Someone may want to minister to you and serve you because they are a good Christian filled with God’s love, but a friendship? Probably not.

In the church, for example, we can all be united as “one” because we are connected through our shared beliefs about Jesus Christ (Galatians 3:28). You can enjoy the fellowship of someone 40 years older than you at small group Bible study because you are brought together over your desire for God. Without your shared passion for Christ and Bible study, you two would have nothing in common and not be friends. C.S. Lewis states:

Friendship is born at the moment when one man says to another ‘What! You too? I thought I was the only one.’”

If you try to become friends with someone by just focusing on that person, the friendship will never grow. It will feel forced and awkward because that’s not how real friendships work. Friends are side by side doing things together. James 4:4 states:

“You adulterous people! Do you not know that friendship with the world is enmity with God? Therefore whoever wishes to be a friend of the world makes himself an enemy of God.”

Why is friendship with the world so bad? Because friends do the same thing as their friends. If you are truly friends with the world in the sense that James 4:4 is referring to, this means you are living a worldly life and have sinful behavior in common with those who do not know Christ.

Common interests unite friends. Therefore, if you like someone and want to be their friend, you have to join them in some sort of common interest. Serve in the ministry they serve in, join the coed softball team they are on, join the Bible study group they attend – just do something together than you both enjoy.

If you have nothing in common and you can’t seem to build a friendship, this is a sign a romantic relationship is a bad idea.

If You Want to Start a Friendship with Someone You Like, Become Friends With Their Friends

This one can get you into trouble really fast if you are not careful.

I don’t think you should try to become friends with someone just so you can impress someone else. You should genuinely care about the person you are becoming friends with for who they are. Value them as a person, not as a tool to meet someone else.

However, one way to become friends with someone you like is to join their circle of friends. When I was becoming friends with my wife, I naturally became friends with her friends too. I built genuine relationships with some of them and I truly valued our friendship regardless of the effect it had on my relationship with Bethany.

But my connection with Bethany’s friends certainly helped my chances with her as well.

Try New Things, But Be the Real You

In summary, if you want to build a friendship with someone you like, you have to go out of your way to meet that person where they are at. You have to step out of your comfort zone and enter into the paths they are walking on in life.

You don’t want to pretend you are someone you are not, but you do want to try new things that you have not tried before. You can change your environment as a way of meeting new people while still being the same you. C.S. Lewis states:

So don’t pretend to be someone you are not. You won’t be able to keep the act up for very long anyway. If you two don’t naturally enjoy each other as friends and a friendship never happens, accept that it wasn’t meant to be. You wouldn’t want to marry someone who doesn’t enjoy you anyway.

But if you to enjoy each other and a friendship blossoms, perhaps God is leading you to take the next step with this person you like as more than a friend.