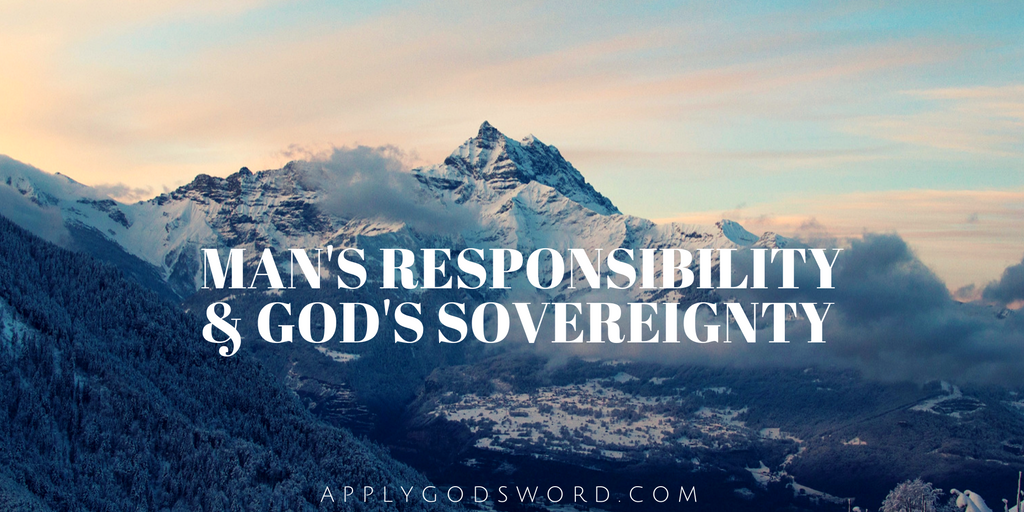 Problems arise amongst Christians as we discuss the relationship between man’s responsibility and God’s sovereignty when we begin to put emphasis on truths that the Bible does not place emphasis on.

For example, as John 15:4-8 expresses, the fact that we can do nothing good without Christ does not mean we are called to do nothing. Christ gives us power to act, but we must still choose to live in that power and act.

Jesus had to die on the cross for us, but he still tells us to take up our cross daily to deny ourselves (Matthew 16:24). This is an active command, requiring a choice of the will and action from the body. We won’t be able to do it if we are not relying on Christ, but we are called to “do” these things with Christ nonetheless. His power makes possible our right choices and actions, but we are still responsible to make these right choices and actions. His power and sovereignty are the reason we have no excuse for not doing good; the fact that he is the only sovereign power able to cause us to do good is not an excuse for our personal failures.

“Therefore, my beloved, as you have always obeyed, so now, not only as in my presence but much more in my absence, work out your own salvation with fear and trembling, 13 for it is God who works in you, both to will and to work for his good pleasure.” (Philippians 2:12-13)

If you were to read Philippians 2:13 in isolation, you would have a desire to argue that if it is God who sovereignly works in us to give us both the desire and the power to obey him, then why are we responsible when we disobey God? However, when you read Philippians 2:12 and 13 together, this logic is turned on its head. God’s power in us is the reason we should act rightly, not an excuse to not act rightly. We are told to obey God. Why? “For it is God who works in you . . . .” God’s power in us is why God now expects us to obey him.

In a slightly different example but in the same vein, the fact that God divinely elects is not a reason to avoid active evangelism; rather this should empower and emboldens us to personally evangelize more, since we know God has the power to save.

Unfortunately the emphasis has become that you don’t have to do anything to be saved, but that’s not the emphasis of the Bible. It’s not wrong to simply state how there’s nothing we need to do but believe to be saved. But to emphasize the “do nothing” part is to emphasize what the Bible does not emphasize, thus altering its true meaning. The Bible’s emphasis is not really on how you don’t need to do anything; it’s emphasis, rather, is on how you can’t do anything to be saved. But it still nonetheless requires you to actively obey Jesus Christ’s commands and repent of sin.

It’s not hard to become a Christian because of God’s free grace in Jesus Christ. It is, however, very hard to be a Christian in this unchristian world. It’s dangerous to tell somebody “It’s easy to become a Christian” because they might reinterpret this into “It’s easy to be a Christian.” The Bible does not emphasize your need to do nothing and thus the easiness of following Christ, but rather it emphasizes your need for God to empower you for the many difficult trials that will come when following Christ.

The Bible does not emphasize how it is easy to become a Christian, the Bible emphasizes how impossible it is. Again the emphasis in the Bible is not that we must sit idly by to be saved, but rather that God has done the impossible for us and therefore we must actively rely on him. Mark 10:26-27 says, “And they were exceedingly astonished, and said to him, ‘Then who can be saved?’ 27 Jesus looked at them and said, ‘With man it is impossible, but not with God. For all things are possible with God.’”

Ephesians 2:8-9 have become favorite verses of the modern evangelist, “For by grace you have been saved through faith. And this is not your own doing; it is the gift of God, not a result of works, so that no one may boast.”

There should of course be an emphasis that we are saved by grace alone. But grace is not alone, for it is always accompanied by good works by those who truly receive grace. Ephesians 2:8-9 states we are saved by grace through faith, but it is a crime to not read Ephesians 2:10 to emphasize the whole picture Scripture seeks to paint, “For we are his workmanship, created in Christ Jesus for good works, which God prepared beforehand, that we should walk in them.” We are not saved by works, but we are saved for good works done unto God.

The Bible points out our desperate need for God’s power not to give us an excuse “since it all depends on him anyway”; it tells us to rely on God’s power so we know there is now no excuse left not to obey him.

Mark 16:3-4 the tomb stone was impossible to move, the women could not force themselves to Jesus. Someone had to move the stone for them. Likewise, the door of death is too heavy for us as well. The stone barring our exiting the grave is too heavy, Jesus has to remove it for us. May we be like those women who went to the tomb, knowing the stone was too heavy, but believing nonetheless that God would move it for them. Their emphasis was not on the stones weight, but on the strength of their Savior to do the impossible.

These thoughts regarding the sovereignty of God and man’s responsibility are like taking a toothpick to a granite boulder, hoping to burrow deep inside. So much more could be said, and so much more is impossible to say.

What we can conclude, however, is that the Bible does not emphasize a contradiction between man’s responsibility and God’s sovereignty but emphasizes their harmonic relationship. Our job as Christians is not to spend our lives learning to reconcile these two truths in our minds which don’t need to be reconciled in reality. Rather, our job as Christians is to learn to rely on God’s sovereign strength so we can fulfill our human responsibilities better and better every day.