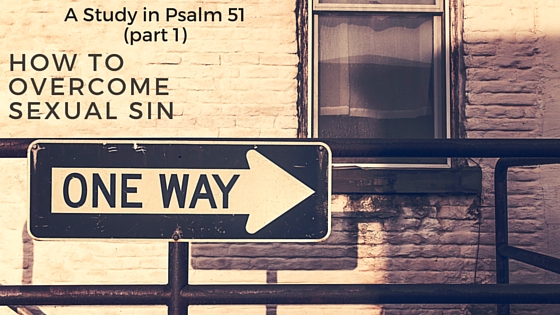 Psalm 51 Introduction: “To the choirmaster. A Psalm of David, when Nathan the prophet went to him, after he had gone in to Bathsheba.”

To overcome sexual sin, we must first believe that God’s grace is great enough.

Perhaps nowhere else is a picture of God’s scandalous grace seen better than in the life of David. If you’re unfamiliar with David’s story, it starts with God picking him and anointing him. He was the youngest in his family, the least deserving to be the king of Israel, but God chose him anyway. David then killed Goliath, fought and won many battles, and eventually became the most celebrated king of God’s chosen people. Jesus’ lineage can be traced back to David.

But despite all of this, right at the peak of David’s life, David totally and utterly blows it through sexual sin. He blows it in a ridiculous way that you would never expect of God’s chosen servant. He commits adultery with another man’s wife, he has the husband murdered because the woman get’s pregnant, and in the end, because of David’s sin, the baby dies (2 Samuel 11-12). And then when David is long dead, he is remembered in Acts 13:22 to be “a man after God’s own heart . . . .”

Wait…what? What! How can this be, how can this sinner, this adulterer, this murder, this fool who caused the death of an innocent baby, how can this man be so highly favored by such a holy God? This truly is scandalous grace.

To understand how all these pieces fit together, we have to look at Psalm 51. Psalm 51 is the missing key to understanding how David could go from being an immense sinner to a man highly favored, a man after God’s own heart.

We All Need God’s Grace Because We All Have Sinned Sexually Like David, With Eyes Wide Open

Every Christian would love to do great things for God, but every one of us has the same problem. We sin. We sometimes feel like Christianity gave us a second chance, but then we’ve blown it again. True Christianity, however, is not about getting a second chance, or a third chance, or a fourth chance. Christianity is about getting a completely new life (2 Corinthians 5:17). God does not make us great because of our effort and perfections; he makes us great through his grace and our repentance. Being great in the eyes of God has less to do with us and more to do with God’s grace taking hold of us.

It’s interesting when you start studying those people in the Bible who God used in big ways. Moses, Joshua, Samson, Peter, Paul, and many others – they seem to all have a similar life pattern. God begins to do a work in them, great things begin to happen, but then they sin in a big way, they create a big blemish on their resume, but then they repent and God shows them grace as they go on to do even greater things.

They all have moments of huge failures in their lives. Moses temporarily loses faith in God and goes about things his own way in Numbers 20, Joshua makes a covenant with the surrounding people after God commanded him not to in Joshua 9, Samson married a horrible woman who exposed his secrets to his enemies in Judges 16, Peter denies Jesus three times in all four Gospels, and Saul later named Paul, a student of the Law, murders Christians in the book of Acts 8. But God catches them all. They all repent through grace. God disciplines them, saves them, forgives them, and uses them in great ways. God desires to do the same for us.

If God Redeemed David from Sexual Sin, He Can Redeem Us Too

David, like the men I’ve just mentioned, knew God in a special way. But David sinned horribly, probably far worse than anyone reading this book. So we can fully appreciate Psalm 51, let us read 2 Samuel 11:2-5 to give us a greater understanding of the sin David committed:

One evening David got up from his bed and walked around on the roof of the palace. From the roof he saw a woman bathing. The woman was very beautiful, 3 and David sent someone to find out about her. The man said, “She is Bathsheba, the daughter of Eliam and the wife of Uriah the Hittite.” 4 Then David sent messengers to get her. She came to him, and he slept with her. (Now she was purifying herself from her monthly uncleanness.) Then she went back home. 5 The woman conceived and sent word to David, saying, “I am pregnant.”

And there it is. Just the plain, raw, sinful facts. No punches pulled, no sugar coating it. You don’t have to guess at what happened. And as you read further it just gets worse. David doesn’t instantly repent. He tries to make it right his own way. He tries to get Bathsheba’s husband to sleep with her so it will seem like it’s Uriah’s baby. But Uriah won’t cooperate. David then sends Uriah back to the front lines, and in a sickening twist to the plot, he actually sends a letter with Uriah to give to the commander of David’s army with the instruction to put Uriah in the thick of the battle so he will die.

To make matters worse, if that’s possible, it’s also worth noting that Uriah was actually a valiant warrior committed to David. They were probably close friends. Uriah was not just an average soldier. He was actually a member of David’s “Might Men” listed by name in 1 Chronicles 11:41.

David simply pats Uriah on the back and smiles, hands him the letter with his death warrant in it, and sends this faithful warrior on his way, smiling as he walks off to his bloody end. “See ya, buddy-old-pal, my good and loyal friend . . .” and then David marries Uriah’s wife.

These sins are horrible if anyone committed them, but the fact that King David, God’s chosen servant commits them, makes the offense all the more shocking. Luke 12:48, “But the one who does not know and does things deserving punishment will be beaten with few blows. From everyone who has been given much, much will be demanded; and from the one who has been entrusted with much, much more will be asked.”

This verse applies to us all. We have all been given much. We can all relate to David, sinning with eyes wide open. And we all can relate from experience what David must have felt. We all know from experience that the worst type of shame comes from the sexual sin that you committed even though you knew better.

What can you possible do now? We must do what David did in Psalm 51. He doesn’t make God a promise. Instead he bends his knees in prayer. As we study these nineteen verses, the first thing we must do is capture the spirit in which they were written. David did not write a technical, psychology-saturated, step-by-step plan on how to overcome sexual sin. David wrote Psalm 51 as a heart-felt prayer to God.

Therefore, we must study Psalm 51 prayerfully, knowing that it will not be through tips and techniques that we are set free from the snares of sexual bondage, but through God’s scandalous grace. God alone has the power to set us free, therefore let us, through active prayer, like David, rely on God alone for the freedom we so desperately desire.