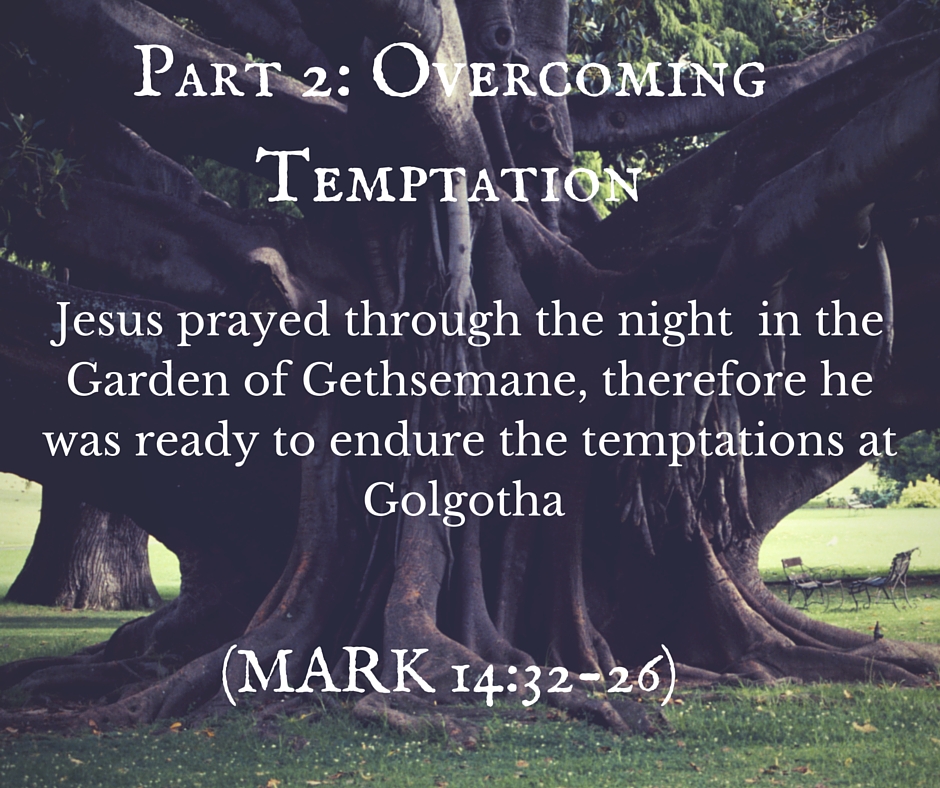 And they went to a place called Gethsemane. And he said to his disciples, “Sit here while I pray.” 33 And he took with him Peter and James and John, and began to be greatly distressed and troubled. 34 And he said to them, “My soul is very sorrowful, even to death. Remain here and watch.” 35 And going a little farther, he fell on the ground and prayed that, if it were possible, the hour might pass from him. 36 And he said, “Abba, Father, all things are possible for you. Remove this cup from me. Yet not what I will, but what you will.” -Mark 14:32-26

The Bible’s warning on temptation is as clear as can be. It is not a matter of “if” we will be tempted; the Bible always talks about temptation in the context of “when you are tempted.” Therefore, like Jesus, we must prepare in advance through prayer before the moment of temptation is upon us.

As Jesus modeled for us in Gethsemane which took place before the cross, prayer is how you prepare for the temptations ahead. The disciples slept the night away while Jesus prayed through the night, and the disciples fled when persecution came while only Jesus stood faithful.

Likewise, Jesus prepared in prayer for the cross. He made sure his spirit was ready for the storm of suffering that was to come upon him. He prayed in the quite of the night, in the seclusion of the Garden of Gethsemane, therefore he was ready to endure all the pain of Golgotha and all the chaos that took place around him on Calvary.

The disciples slept through the night, and when the soldiers came they all ran because they had not gotten ready for this battle. Jesus won the victory on the cross, but he secured the victory beforehand when he laid on his face in prayer and committed himself to doing the Father’s will no matter what.

In Mark14:36 Jesus models the two main ways prayer helps us prepare in advance for temptation. One: God can change the circumstances in the world around us. Two: God can prepare the one who prays for the temptations ahead.

It’s right to ask God for the things you want. All over Scripture we are instructed to ask God. Right here Jesus himself is asking his Father for what he wanted. In one respect, Jesus clearly did not want to bear the shame of the cross. In Hebrews 12:2 we are told that Jesus scorned the shame of the cross. He was not skipping along with a smile as if it was no skin off his back. The thought of bearing the sin of the world was anguish for Jesus. The text says in Luke 22:44 that Jesus’ pain before the cross was so severe that his sweat became like drops of blood. Jesus says in Mark 14:34 that his soul was overwhelmed with sorrow almost to the point of death.

So of course it was right for Jesus to ask that if it were possible, that this cup of suffering might pass. Likewise, it is right for us to pray that God might change the troubles and temptations in the world around us.

Prayer Helps Us Overcome Temptation Because Prayer Strengthens/Changes Us

The second part of Jesus’ prayer, however, is an element of prayer that most of us probably think far less about, but perhaps is given more emphasis in the Bible. Jesus said, “Yet not what I will, but what you will.” Prayer can be used by God to change the world around us, but more often than not God uses prayer to change what is happening inside of us.

God uses prayer more often not to change his will every time we ask him, but rather to conform the person praying to his will. First Jesus prayed that the external circumstances would change for him, which is right and biblical to do. But then he also submits himself to the preordained will of God. He not only prays about the temptation, in prayer he prepares himself to handle the temptation correctly, remaining faithful to God even if the difficult circumstance remains.

Perhaps God is not in heaven constantly changing what he has planned when we pray about it, but perhaps he desires us to pray so he can prepare our hearts for the plans he already has for us.

Romans 8:28 is perhaps one of the most famous verses in the Bible. If you go into the Christian bookstores, 50% of the their beautiful and very classy trinkets will have this verse on them, “And we know that in all things God works for the good of those who love him, who have been called according to his purpose.” It’s a beautiful verse. It’s an amazing promise that should bring us comfort. When bad things happen, God can work them out for our good. But to really appreciate what God is saying we must keep reading, for Romans 8:29 states, “For those God foreknew he also predestined to be conformed to the image of his Son, that he might be the firstborn among many brothers and sisters.”

God works everything out for our good not ultimately because God will do everything that we pray, but rather through our prayers God is going to change us. When we come into the presence of God, we are not there so we can change the mind of God, but rather that our minds might be changed by him. God conforms us to the image of his Son, we are not conforming God. God is the potter and we are the clay, and one of God’s primary tools for molding us is prayer.

Romans 12:2, “Do not conform to the pattern of this world, but be transformed by the renewing of your mind. Then you will be able to test and approve what God’s will is—his good, pleasing and perfect will.” Again, God conforms us to his perfect will.

God Does Not Spare Us of Temptation, But He Does Promise to Deliver Us Out of It

The Father heard the cries of Jesus, and he answered Jesus. But that doesn’t mean he was spared the cup of suffering as he asked. God did not spare Jesus death, but he saved him out of death through the resurrection.

God has not promised to stop the storms, he hasn’t promised to change all our outer problems around us. But he has promised that he will bring us safely through the storm if we rely on him.

Jesus never told Peter that he could avoid temptation, “Watch and pray that you may not enter into temptation” (Mark 14:38). He told Peter to pray so that he would not fall into temptation. God does not spare us of these trials and temptations we encounter on earth, but he does desire to deliver us out of them.

No temptation has overtaken you that is not common to man. God is faithful, and he will not let you be tempted beyond your ability, but with the temptation he will also provide the way of escape, that you may be able to endure it.- 1 Corinthians 10:13