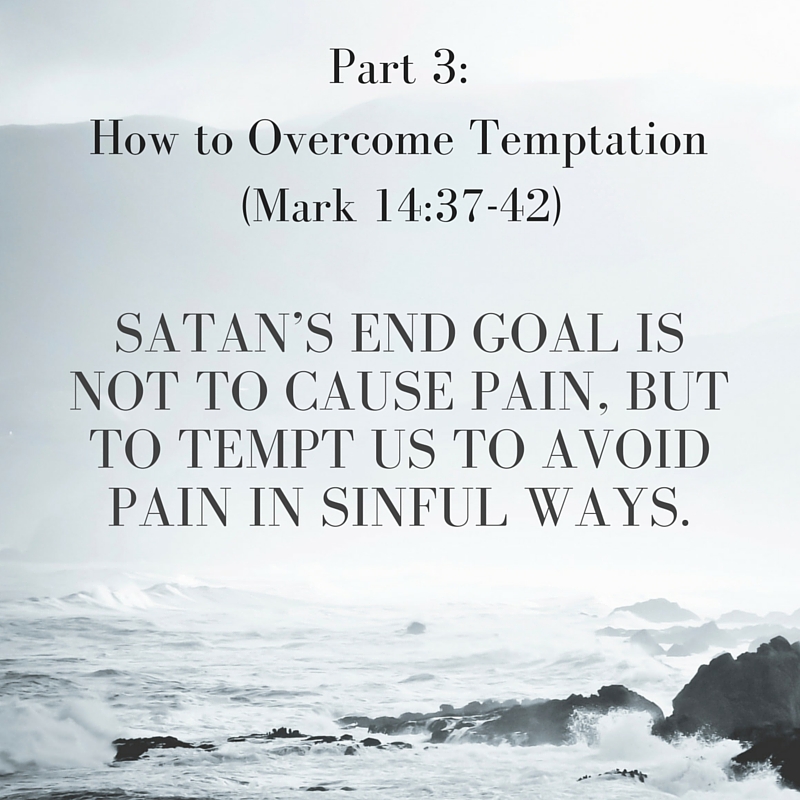 And he came and found them sleeping, and he said to Peter, “Simon, are you asleep? Could you not watch one hour?  Watch and pray that you may not enter into temptation. The spirit indeed is willing, but the flesh is weak…” Mark 14:37-42

Again, Jesus said to Peter in Mark 14:38, “Watch and pray that you might not enter into temptation.” That’s gold if you’ve ever been plagued with a reoccurring sin. If you’ve ever wondered how you are going to stop indulging in addictive sins over and over again, Jesus just told us, but so often we skip over this advice because it sounds so simple.

In seminary, during my pastoral counseling class we were taught a premise that I believe the Bible supports: Complicated problems don’t require complicated solutions. So many times in counseling the pastor is presented with a problem so complicated, with so many issues involving years and layer after layer of dysfunction, it can be daunting to try and offer some helpful advice in a 30 minute window.

But thankfully the Bible makes everything less confusing, not easy, but simplified. “Watch and pray, that you might not enter into temptation. . . .” It’s as clear as can be.

If you go to the doctor there’s no need to do Cat Scans, X-rays, and blood work to figure out what’s wrong with you if you’re not drinking water. Likewise, sometimes we think we need counseling and professional psychiatric help when we are neglecting our prayer time with the Lord. The basics are the basics for a reason, not because they are for novices and beginners but because they are essential for every Christian.

1 Timothy 4:8 states, “For physical training is of some value, but godliness has value for all things, holding promise for both the present life and the life to come.” When Jesus told the disciples not to sleep, but rather to watch and pray, he is not condemning sleep. The Holy Spirit is very practical. If you’re hungry, eat some food. If you’re tired, get some sleep. If you’re thirsty, drink some water. In 1 Timothy 5:23, Paul even told Timothy to drink some wine to help with his stomach problems, meaning, if you’re sick, pray about it, but also take some medicine too. Jesus is not condemning our pursuit of natural, human needs.

What Jesus is condemning is using natural remedies for supernatural problems.

The problems we face are not in the things around us, but with the needs inside of us. When we try to fill a spiritual need with an earthly remedy, we fall into sin. The heart is in desperate need of God, and when it tries to get what it needs from earthly pleasures, the heart’s need is too great, and therefore it goes too far. You eat too much food, you try and take too much from a relationship . . . the needs of the heart require too much from the remedies of the earth.

We go beyond what is right because earthly pleasures don’t fill us as we need. Only God himself can fill the human spirit with his Holy Spirit. Therefore, when our hearts our empty, only when we turn to God will they be satisfied, only when we run to him in prayer will we avoid using good things in bad ways. A spiritual need needs the Holy Spirits presence.

Satan’s End Goal is Not to Cause Pain, But to Tempt Us to Avoid Pain in Sinful Ways

Satan’s attack against Jesus both in the desert in Luke 4:1-13 and before the cross was not to make him suffer, his attack against Jesus was to try and tempt him to avoid suffering. Likewise, so many times we think Satan is the one behind our hurt, and often times he is, but his real goal in our lives is to get us to pursue pleasures outside of God’s will for us. He wants us to ease our hurts in sinful ways. He knows it’s not the pain that will separate us from God, it’s when we choose other lovers to be our relief that will do the most damage.

Screwtape Letters is book written by C.S. Lewis, and it’s written from the perspective of an older demon training a younger demon on how to attack Christians. In it, the older demon explains to the younger demon:

You don’t realize how enslaved they are to the pressure of the ordinary. I once had a patient, a sound atheist, who used to read in the Museum. One day, as he sat reading, I saw a train of thought in his mind beginning to go the wrong way. The Enemy, of course, was at his elbow in a moment. Before I knew where I was I saw my twenty years’ work beginning to totter. If I had lost my head and begun to attempt a defense by argument, I should have been undone. But I was not such a fool. I struck instantly at the part of the man which I had best under my control, and suggested that it was just about time he had some lunch. The Enemy presumably made the counter-suggestion that this was more important than lunch. At least I think that must have been what he said, for when I responded to my patient, “Quite. In fact this is so important, you should not attempt it on an empty stomach,” the patient brightened up considerably; he was already halfway to the door before I even added “Much better come back after lunch and think about all this with a fresh mind.” Once he was in the street the battle was won. I showed him a newsboy shouting the midday paper, and a No. 73 bus going past, and before he reached the bottom of the steps I had [helped him form a strong] conviction that whatever odd ideas might come into a man’s head when he was alone with his books, a healthy dose of “real life” was enough to show him that all [that God stuff] just couldn’t be true. . . . He is now safe in Our Father’s house.”

Satan’s tries to get us to store up treasures on earth, to seek our pleasures now, to avoid spiritual suffering in place of earthly satisfaction. He tries to give us sinful indulgences now because he knows this will cause us to lose our eternal rewards later.

Catering to the flesh instead of the spirit is laying the foundation for failure. We are to look for our deliverance from God and not worldly pleasures because God is the one who is in total control of everything. Hebrews 12:2 explains, “For the joy set before [Jesus] endured the cross, scorning its shame, and sat down at the right hand of the throne of God.”

[God] wants men to be concerned with what they do; our business is to keep them thinking about what will happen to them. . . . Our cause is never more in danger than when a human, no longer [feeling up to the challenge], but still intending to do our Enemy’s will [regardless], looks round upon the universe from which every trace of God seems to have vanished, and asks why he has been forsaken, and still obeys.”

May we, like Jesus, look ahead past our present temptations and look to the glory of God and our eternal good in him, “Now my soul is troubled, and what shall I say? ‘Father, save me from this hour’? No, it was for this very reason I came to this hour. Father, glorify your name!” (John 12:27-28)