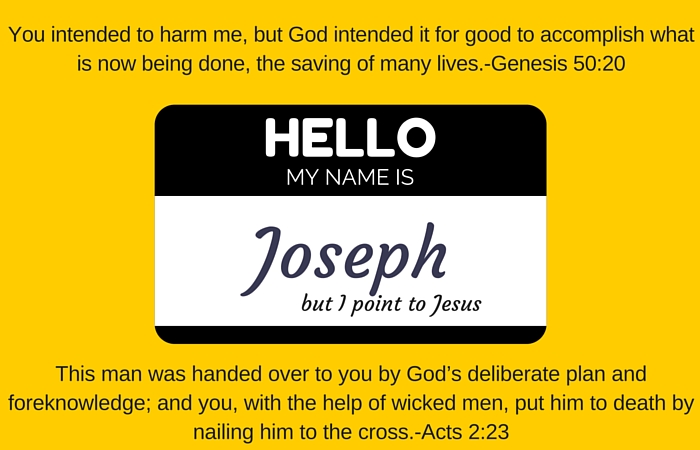 The whole Bible is ultimately pointing to Jesus Christ and his gospel work. As we look at the life of Joseph, you can’t help but see how God was pointing us ahead to the life of Jesus.

Joseph was born to his parents in a miraculous way since his mother Rachel needed a supernatural work for her womb to be opened (Genesis 30:22). Joseph’s father sent him to his brothers (Genesis 37:14), but then his brothers cast him in a pit and sold him into slavery, basically killing Joseph as they stripped from him his life and place in the family (Genesis 37:28). But God eventually rose Joseph up and put him in charge over all of Egypt, and God used Joseph’s place of power to actually save his brothers, the very ones who tried to kill him. In the end Joseph was able to say to his brothers, “You intended to harm me, but God intended it for good to accomplish what is now being done, the saving of many lives” (Genesis 50:20).

Jesus was born in a supernatural way (Matthew 1:18). He was sent to earth by the Father, but those whom he was sent to were the very ones who killed him. They killed Jesus of their own will, but it was also God’s will because he had bigger purpose in it all, the saving of many lives:

This man was handed over to you by God’s deliberate plan and foreknowledge; and you, with the help of wicked men, put him to death by nailing him to the cross. But God raised him from the dead, freeing him from the agony of death, because it was impossible for death to keep its hold on him. . . . “Therefore let all Israel be assured of this: God has made this Jesus, whom you crucified, both Lord and Messiah.” (Acts 2:23-24, 36)

Joseph was a foreshadowing of Jesus. God used sinful man to ruin Joseph, but God raised Joseph out of that pit and placed him in a position of power. Likewise, God used sinful man to crucify Jesus, but God raised him from the dead, gave him the greatest position of power, and now Jesus is the only way of salvation. Joseph saved the nation of Israel, God’s chosen people; Jesus has eternally saved God’s ultimate chosen people.

From start to finish the Bible is ultimately about Jesus Christ and his gospel work.