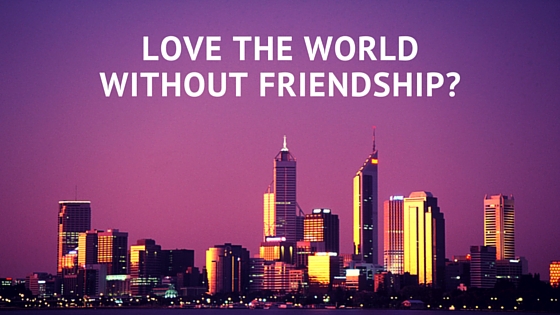 Bible Verses:
You adulterous people! Do you not know that friendship with the world is enmity with God? Therefore whoever wishes to be a friend of the world makes himself an enemy of God. – James 4:4

While Scripture is clear that believers should “not be unequally yoked with unbelievers” (2 Corinthians 6:14), it also clear that Christians should seek to serve and love the world, for as Jesus said, “Love your neighbor as yourself” (Mark 12:31). These two commands are not in contradiction. While it may seem like we must be friends with the world to love the world, this is not truly the case. Therefore, its important to truly know what friendship with the world really looks like and what it does not look like.

What does friendship with the world look like? First it’s important to define the word “world.” In some contexts this refers to the earth, the planet, or the human race. In other contexts, like James 4:4, it refers to sinful people’s collective sins, evil tendencies, cravings, false beliefs, rebellion, and etc. The “world” in this context is where we get the phrase “worldliness,” which of course refers to sinfulness.

With that said, to answer the question, “What does friendship with the world look like?” it helps to also point out that biblically, there is a difference between “friendship” and being “friendly.” All Christians are called to be servant minded, to love, to be kind, to turn the other cheek, and to consider others more important than ourselves (Philippians 2:3). Christians are called to serve both non-Christians and Christians (Galatians 6:10). However, none of these facts contradict God’s command for Christians to not have a “friendship with the world” (James 4:4).

Friendship With the World Looks Like Taking Rather Than Giving

In summary, Christians are to be givers to the world, not takers. We can listen to and counsel those people in our lives who don’t know Christ. We can spend time with them, enjoy their company, and include them in certain parts of our life, all under the canopy of love. But when we receive into ourselves the ways and counsel of the unsaved, opening our hearts to their influence upon us, that’s when we begin to sin.

What does friendship with the world look like? Notice the requirement for friendship in Jesus’ statement in John 15:15 (NIV), “I no longer call you servants, because a servant does not know his master’s business. Instead, I have called you friends, for everything that I learned from my Father I have made known to you.”

Friendship With the World Looks Like Entrusting Yourself to the World

What does friendship with the world look like? To answer this questions, it helps to look at the way Jesus lived. We often take it for granted that Jesus must have been a very open and inviting person to unbelievers. But was he? Jesus came into the world to save sinners (1 Timothy 1:15), “But Jesus on his part did not entrust himself to them, because he knew all people and needed no one to bear witness about man, for he himself knew what was in man” (John 2:24-25).

Jesus was surely the most friendly person to sinners who has ever walked the earth, but Jesus would not consider any sinner his true friend until that person’s sin was paid in full through faith in his gospel. We must serve, counsel, and love the lost. But we must also protect our own hearts, guarding ourselves from entering into a friendship where we will be shaped by those who do not seek to honor Christ.

So what does friendship with the world look like? It looks like a life opposite of Jesus’ life. Jesus loved, served, and even died for sinners. But no one can come into a personal and intimate relationship with Jesus Christ until they have forsaken worldliness for holiness in him. May we, like Christ, love the world without becoming a part of it.