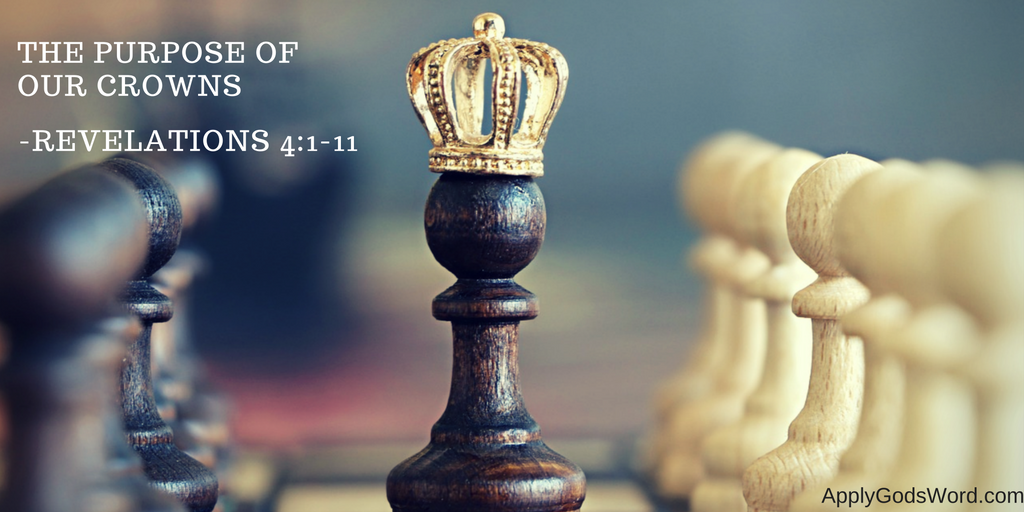 11 “Worthy are you, our Lord and God,
to receive glory and honor and power,
for you created all things,
and by your will they existed and were created.”

Why does God ultimately bless his people with crowns? To receive a crown is to receive honor, authority, beauty, favor, and notoriety.

In James 1:12 it says that those who persevere under trial will receive the crown of life. In Psalm 103:4 it says that God, “crowns you with steadfast love and mercy.” In Ester 2:16-17, Ester is brought before the king, and she pleases him so much that “she won grace and favor in his sight more than all the virgins, so that he set the royal crown on her head . . . .” Like Ester, God puts crowns on his people, symbolizing the grace and favor we have with him.

Because of Christ, we have been crowned with glory and honor (Psalm 8:5). Christ bore the cross so we could get a crown of salvation. Jesus put on the crown of thorns which we deserved so that we might be able to wear the crown of grace and mercy (2 Corinthians 5:21).

Without denying the incredible grace, honor, and glory God has placed on his people, his true motivation was more than to simply bless his people (but certainly not less). In Revelations 4:4, regarding what the twenty-four elders represent, Matthew Henry says this:

He saw four-and-twenty seats round about the throne, not empty, but filled with four-and-twenty elders . . . representing, very probably, the whole church of God, both in the Old-Testament and in the New-Testament . . . Their sitting denotes their honor, rest, and satisfaction; their sitting about the throne signifies their relation to God, their nearness to him, the sight and enjoyment they have of him. They are clothed in white raiment, the righteousness of the saints, both imputed and inherent; they had on their heads crowns of gold, signifying the honor and authority given them of God, and the glory they have with him. All these may in a lower sense be applied to the gospel church on earth, in its worshipping assemblies; and, in the higher sense, to the church triumphant in heaven.”

So God has blessed his people, symbolized by these elders, with thrones representing his delegated authority, white garments representing the gift of purity and holiness he has bestowed on them, and with golden crowns on their heads showing the favor and love he has placed on them. But then in Revelation 4:10, the fuller picture of God’s purpose in blessing his people is revealed. Of Revelation 4:10, Matthew Henry states:

They cast their crowns before the throne; they gave God the glory of the holiness wherewith he had crowned their souls on earth and the honor and happiness with which he crowns them in heaven. They owe all their graces and all their glories to him, and acknowledge that his crown is infinitely more glorious than theirs, and that it is their glory to be glorifying God.”

God gives authority, righteousness, and greater value to Christians than to any other part of his creation so that we might be able to worship him as he deserves. It is a greater act of worship for a person with authority to fall down on the floor out of their thrown than someone who doesn’t have any authority. It is far more honoring to sing to God in pure robes rather than in dirty rags stained with sin. God gives us golden crowns not that they might sit pretty on our heads, but rather so we can have something of value to cast before our Savior’s throne, acknowledging that he alone is the reason we have a crown at all.

The cross of Christ certainly purchased, for all who believe, a crown of life. But our crowns are meant to be cast at his feet in worship. We are glorified, loved, and redeemed so that we might be made worthy through Christ to worship our awesome God. God does not want the worship of sinful people still stained with their own rebellion. So he makes a kingdom of priests “so that they might serve him” (Revelation 5:10)

God blesses his people with crowns so our souls might bless him (Psalm 103:1-5). God crowns us with life so that we might love him and live for him (James 1:12). God crowns us with glory and honor (Psalm 8:5) so we might cry out, “O LORD, our Lord, how majestic is your name in all the earth!” (Psalm 8:9). And like the twenty-four elders in Revelations 4, we are blessed immensely not so we can sit pretty on our thrones with white robes and golden crowns, but so that we might be better suited to sing the praises of God:

Worthy are you, our Lord and God,
to receive glory and honor and power,
for you created all things,
and by your will they existed and were created.”-Revelation 4:11