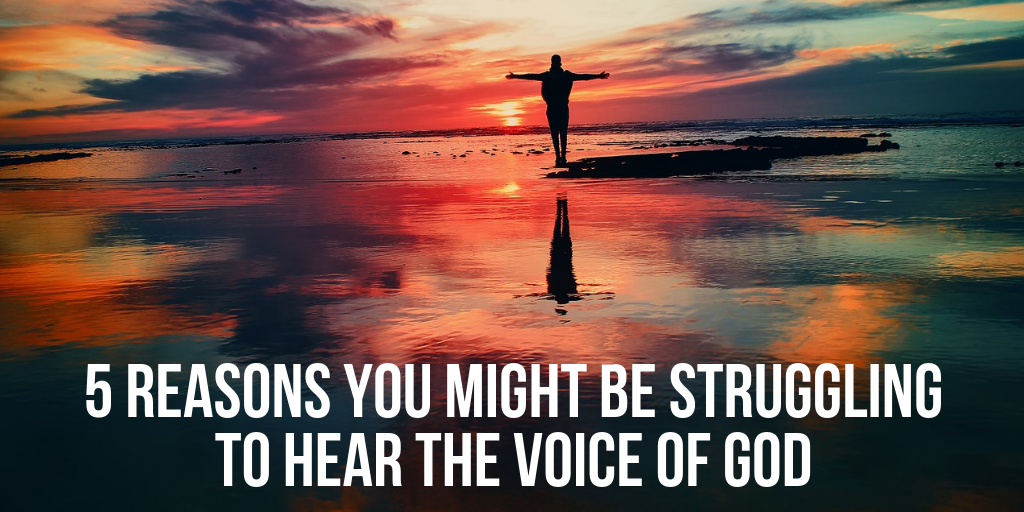 Why doesn’t God talk to me? This is one of the most important questions you can ask if you feel like God is not speaking to you.

If you want God to talk to you clearly and directly, the first thing you must do is put your faith in Jesus Christ. Without becoming a Christian, you do not have direct access to the God because only through Jesus Christ can this miracle occur, “For through him we both have access in one Spirit to the Father” (Ephesians 2:18).

So if you feel like God is not talking to you, what could be going wrong?

You Don’t Know His Voice and His Word

If a crowd of children were all taking at the same time, I am able to pick out my children’s voices because I know my children so well. I hear their voice every day. We all have this experience. A good friend can approach you from behind and when they speak you know instantly who they are even though you haven’t seen them with your eyes yet.

If you don’t know the voice of God, you will not be able to pick his voice out from all the other noises and thoughts that we experience daily. So how can you become familiar with God’s voice so you can hear him when he talks directly to you? You have to know his word.

When you know the word of God, you will learn what God’s voice sounds like. You will learn what types of things he will say to you. You will know when someone or something is falsely imitating the voice of God because God’s personal voice will never contradict his word.

So one reason you may be asking, “Why doesn’t God talk to me?” is because you are not spending time in his word. If you never read the Bible, you will not know God’s voice.

You Are Hoping to Hear Something He Is Not Saying

Another common reason people often feel like God is not talking to them is because they are only listening for what they want to hear. One of the most important factors in hearing God talk to you is being open and willing to hear anything he says.

If you know in your heart you are not willing to hear God say certain things to you, you will always doubt everything you hear even if God really is speaking to you. For one, if you ignore what God is saying because you don’t like it, this is an obvious reason why you feel like God is not talking. Secondly, however, even when God is saying what you want him to say, you will not be able to trust it because you know you want to hear that so bad you might just be making his voice up. In other words, you won’t be able to trust God’s yes to you if you know you are unwilling to listen to a no if he did say that to you.

If you are parent, you know children have selective hearing. For some reason when you say things your kids don’t want to hear, the can’t seem to hear you. But as soon as you say something that they do want to hear, suddenly their ears are working fine. In much the same way, humans often act this way towards God.

So one reason that you may be asking, “Why doesn’t God talk to me?” is because you are only listening to hear what you want rather than truly listening to hear what God is actually saying to you. For example, if you feel like God is not speaking to you about what he wants you to do with a certain relationship you are in, perhaps he is speaking but you are just not willing to listen to what he is saying.

You Are Not Asking Him Questions

In addition to only have selective hearing, sometimes we feel like God is not talking to us because we are not asking him any questions. If you are hoping God just lets you hear his audible voice because you think that would be cool, that’s not going to work.

If you are not asking a specific question you will not get a specific answer. When you start asking God specific things and asking him to show you which way he wants you to take in specific areas of your life, then you will be much more likely to hear God talk directly to you.

Your World Is Too Loud and Your Heart Is Not Still

Just as having a conversation with someone is almost impossible when the environment around you is too loud, when your world is too loud and your heart is not still it will be very hard to hear God talk to you.

Throughout the word of God, we see that God speaks to those who consistently still their hearts to listen (Psalm 46:10). Even Jesus himself had to get alone and quiet his heart before the Father (Matthew 14:23, Mark 1:35, Luke 6:46).

You Are Running From God and Towards Sin

However, as soon as you repent, your ears can be opened again. God is always quick to restore our relationship with him. When we confess our sins, we echo the words of Psalm 66:18-20 and know that God does hear us and is speaking to us:

If I had cherished iniquity in my heart, the Lord would not have listened. But truly God has listened; he has attended to the voice of my prayer. Blessed be God, because he has not rejected my prayer or removed his steadfast love from me!”

If you feel ashamed because of your sin, you won’t be able to hear the voice of God. But God is speaking to you, and when you allow God to cleanse you through the blood of Jesus, you will again be able to hear what he is saying.