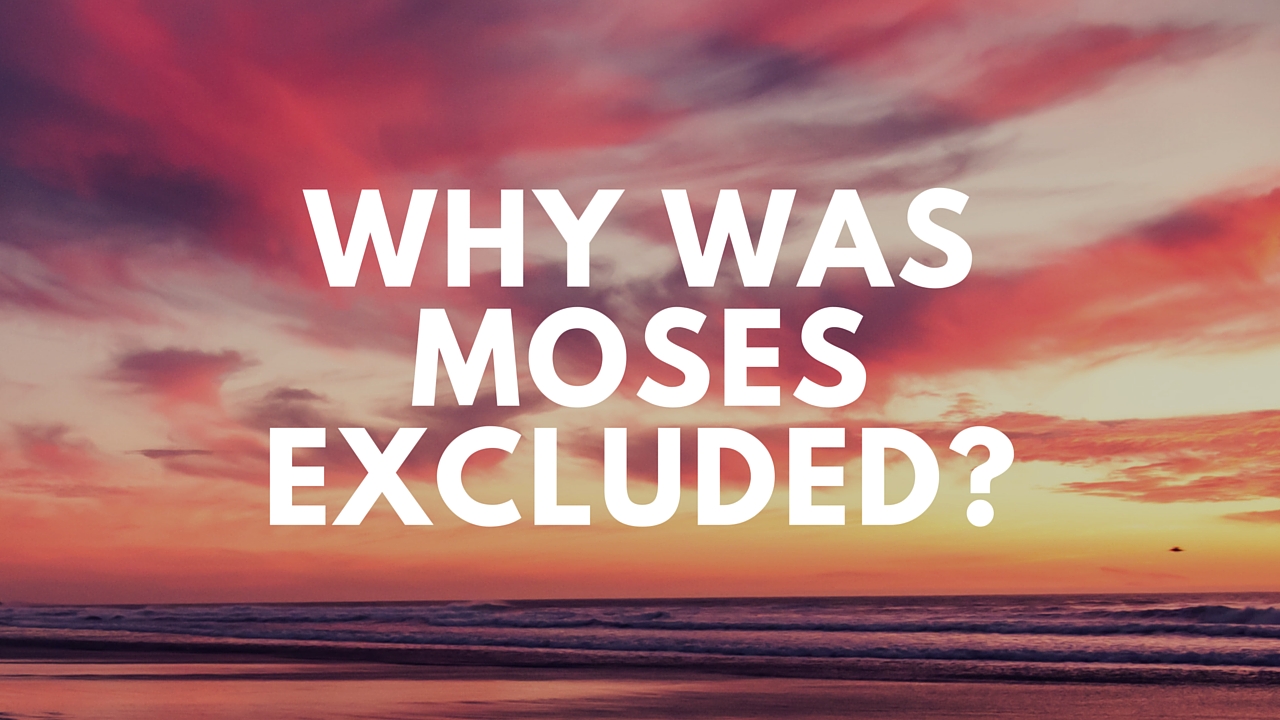 It’s troubling when we learn that Moses was not allowed to lead the Israelites into the Promised Land.

Moses spoke with God face to face. He was God’s chosen instrument to lead the Israelites out of Egypt. God used Moses to give us the Pentateuch, the first five foundational books of the Bible. Moses was the humblest man on the face of the earth during his lifetime (Numbers 12:3). All in all, it’s hard to find a man more devoted to God in all of the Old Testament.

So why was Moses kept from entering the Promised Land?

Numbers 20:2-13 outlines the specific reasons Moses was prohibited from entering the Promised Land, but let’s take a deeper look at what God might be teaching us through barring Moses because of one sinful moment.

In Numbers 20:2-13, Moses was told by God to speak to the rock so water would come out. Moses, however, hit the rock twice with his staff. Because of this one sinful incident, Moses was prohibited from entering the Promised Land.

Certainly Moses sinned, but doesn’t this punishment seem a bit harsh? Moses put up with so much during those forty years of leading God’s rebellious people through the wilderness. Surely Moses did more for God than all of the other Israelites who were able to enter into the Promised Land. What is God trying to say through keeping Moses out?

Whenever we come to a difficult question in Scripture, it’s always helpful to ask, “What is the passage saying about Jesus? How does this point to Jesus?” All of Scripture points to Christ in one way or the other, including this incident of Moses not being allowed to lead the people into the Promised Land.

What’s helpful to note is that in the New Testament, Moses symbolically represents the law. For example, Luke 24:27 explains, “And beginning with Moses and all the Prophets, [Jesus] interpreted to them in all the Scriptures the things concerning himself.” Beginning with “Moses” means beginning with the Pentateuch, the first five books of the Old Testament law written by Moses.

When we go back and read how Moses the man was kept out of the Promised Land, it makes much more sense when we understand that Moses was more than just a man, for he was also a symbol representing God’s law. In other words, God’s people were not going to enter into God’s promises through the law. To receive God’s blessings through the law, we must obey perfectly. Moses had one major blunder on his amazing resume, but it was one blunder too many for a holy God (Number 20:13). Galatians 3:10-11 explains:

For all who rely on works of the law are under a curse; for it is written, “Cursed be everyone who does not abide by all things written in the Book of the Law, and do them.” 11 Now it is evident that no one is justified before God by the law, for “The righteous shall live by faith.”

No one can receive blessings from God based upon their obedience to the law. As James 2:10 also states, “For whoever keeps the whole law but fails in one point has become accountable for all of it.” Only Jesus is perfect. Therefore only Jesus is our salvation.

Jesus, therefore, is our only hope. He alone lived a perfect life, and thus he alone can lead us into the Promised Land (eternal life). We are saved not by works but through faith in Jesus by his grace (Ephesians 2:8-9).

Joshua was the one chosen by God to lead the people into the Promised Land. He was Moses successor, the leader to come after Moses. Do you know what Jesus name is in Hebrew? Yeshua, which translated in English is “Joshua.” Iesous is the Greek transliteration of the Hebrew name, and its English spelling is “Jesus.” Thus we can see that Jesus name can also be translated as Joshua.1

The name “Joshua” literally means, “Jehovah saves” or “YAHWEH is salvation.” One of the main messages of the Bible is that none of us can be saved except through the grace of Jesus Christ. We can’t do it on our own. This message is revealed again through Moses being kept out of the Promised Land. Just as Joshua preceded Moses and led the people into the Promised Land, so Jesus comes after the law was given and leads us into eternal life.

God prohibited Moses from leading the people into the Promised Land as a foreshadowing of how he would later reveal that humans cannot enter eternal life through the law but by grace alone.

Moses’ sin was a micro-reflection of mankind’s sin – relying on ourselves rather than on God. Moses sinned because he turned away from his relational obedience to God and started relying religious formulas for his success.

Before Moses disobeyed God by hitting the rock twice, at a different time he struck the rock once to bring forth water in obedience to God (Exodus 17:5-6). When Moses was confronted with a similar situation in the future, he relied on his past experiences rather than on God and his personal walk with him. Numbers 20:10 shows the subtle change in Moses’ heart, “Listen now, you rebels; shall we bring forth water for you out of this rock?” When Moses asked this, he was referring to himself and Aaron, thus giving himself credit rather than God.

God and the rock were supposed to be the center of attention during this miracle, not Moses. Moses tried to steal the show, thus stealing God’s glory. Why was the rock so significant? 1 Corinthians 10:4 explains that the rock was a foreshadowing of our Rock, Jesus Christ, “For they drank from the spiritual Rock that followed them, and the Rock was Christ.”

Moses certainly repented for his sin as we all must. But through keeping Moses out of the Promised Land for his dependence upon himself, God was teaching us all a deeper lesson. We will never enter into any of God’s promises except through Jesus Christ. For as 2 Corinthians 1:20 states, “For all the promises of God find their Yes in [Jesus Christ]. That is why it is through him that we utter our Amen to God for his glory.” We pray “in Jesus name” and not “in the name of Moses” or “in the name of the law” because our authority and favor are based in Christ.

Moses was kept out of the Promised Land to show everyone that none of us, even if we only break the law just once, can ever receive salvation through anyone other than Yeshua, our Lord and Savior Jesus Christ.