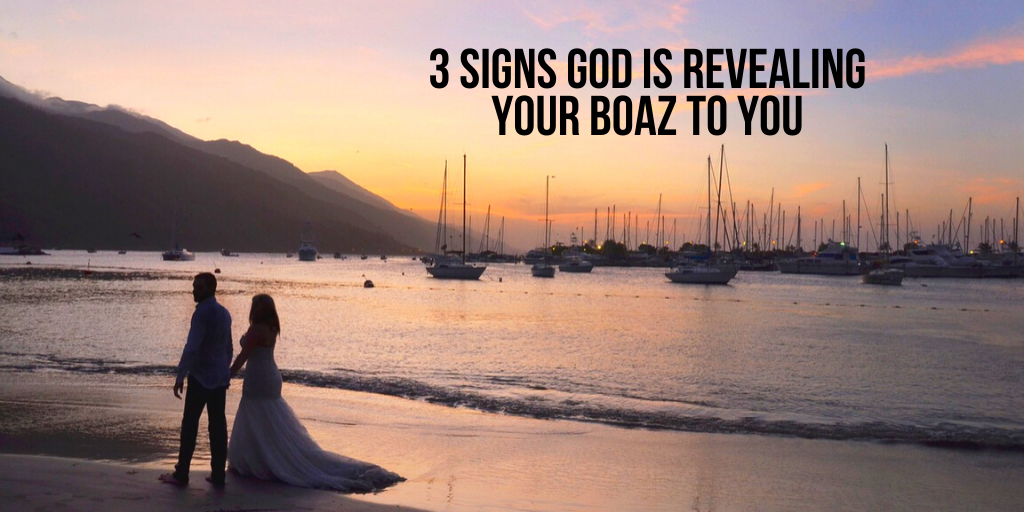 Here are 3 signs God will use to show a woman she has found her Boaz.

1. A Man Could Be Your Boaz If He Is Treating You Better Than You Deserve

The book of Ruth is an amazing story in the Old Testament that I highly encourage you to read on your own. Ultimately, it’s a book that points us to the faithfulness of God, but the Lord teaches us this lesson through Ruth’s story of marrying Boaz. And through this relationship between Boaz and Ruth, there are many incredible relationship principles that can greatly benefit anyone who desires to have a godly marriage one day.

In Ruth 1, we learn that Naomi and her husband go to the land of Moab. Then one of their their sons marries Ruth but then all the males in Naomi’s family die. One thing leads to another and eventually Naomi and Ruth return to Bethlehem in need of help.

Boaz quickly intervenes on Ruth’s behalf and shows her incredible kindness by lettering her work in his fields, protecting her, and by providing her food that she needs. Ruth is then overwhelmed by his generosity. Let’s pick up the story in Ruth 2:10-13. It states:

Then she fell on her face, bowing to the ground, and said to him, ‘Why have I found favor in your eyes, that you should take notice of me, since I am a foreigner?’ But Boaz answered her, ‘All that you have done for your mother-in-law since the death of your husband has been fully told to me, and how you left your father and mother and your native land and came to a people that you did not know before. The Lord repay you for what you have done, and a full reward be given you by the Lord, the God of Israel, under whose wings you have come to take refuge!’ Then she said, ‘I have found favor in your eyes, my lord, for you have comforted me and spoken kindly to your servant, though I am not one of your servants.’”

Here Boaz shows that he actually has a higher view of her than she has of herself. She just sees herself has a widowed foreigner who doesn’t even deserve the kindness of one of his servants. But Boaz sees Ruth for her inner character, her strong work ethic, and for her loyalty. In other words, Boaz doesn’t focus on her flaws but rather he focuses on her gifts and potential.

Likewise, when God brings the right man into your life, he will value you for who God has made you to be. He will treat you with respect. He will even treat you better than you deserve because we all have real flaws and sins in our lives, just like Ruth had many strikes against her. But Boaz saw her differently, and when God brings your Boaz into your life, this man will see you differently too.

2. He Could Be Your Boaz If He Takes Advantage of His Opportunities to Pursue You

I really like Boaz because he seems like the type of guy who takes charge of the situation and does the right thing when he has the opportunity.

When he first sees Ruth working in his fields, he doesn’t pray for three months about whether or not he should help her. He doesn’t overthink the opportunity he has right in front of him. From everything we are told, it doesn’t seem like his motive was marriage when he first helped Ruth. He was just being a godly man to a sister in need. Notice the chain of events we see in Ruth 2:3-9. It states:

So she set out and went and gleaned in the field after the reapers, and she happened to come to the part of the field belonging to Boaz, who was of the clan of Elimelech. And behold, Boaz came from Bethlehem. And he said to the reapers, “The Lord be with you!” And they answered, “The Lord bless you.” Then Boaz said to his young man who was in charge of the reapers, “Whose young woman is this?” . . . Then Boaz said to Ruth, “Now, listen, my daughter, do not go to glean in another field or leave this one, but keep close to my young women. Let your eyes be on the field that they are reaping, and go after them. Have I not charged the young men not to touch you? And when you are thirsty, go to the vessels and drink what the young men have drawn.”

I love the phrase “and she happened to come to the part of the field belonging to Boaz.” Did this really just happen? Of course not. We know that in God’s sovereignty he arranged for this whole thing to happen. When we read later in Ruth 4:21-22, we see that Ruth and Boaz were actually the great-grandparents of King David whose lineage God used to bring Jesus into the world. So we know this first little meeting between Boaz and Ruth was anything but an accident.

But nonetheless, we see that Boaz did not waste this opportunity God gave him. He saw Ruth in his field, took it upon himself to figure out who she was, and then went up to her first to talk with her.

Likewise, when God brings your Boaz into your life, he will take advantages of the opportunities he has with you. If he passively lets every moment pass by when he could have pursued you, this is a sign this is not the man God has for you.

3. He Could Be Your Boaz If He Seeks to Honor the Lord on the Path to Pursuing Marriage with You

Not every godly man you meet will be your Boaz. But if a man is not prepared to honor God by obeying his commands, this is a sign this not your Boaz.

Notice that throughout the story Boaz is careful to pursue Ruth in the right way. The process matters greatly to God. When Boaz and Ruth decide that they want to take their relationship to the next level together, Boaz is careful to honor the Lord in the process. In Ruth 3:12-13, Boaz states to Ruth:

Boaz could have gotten all excited and let his passion for Ruth overtake him. He could have ignored God’s laws at that time and decided that as long as he loved Ruth, that’s all that really mattered. That’s not all that matters to God. Just because a man and woman love each other does not give them an excuse to ignore God’s laws.

Sadly, so many men try to use their love for a woman these days as justification to pressure her into having premarital sex. Many men want the perks of marriage without the commitment of marriage. But notice the care Boaz took to make sure he pursued Ruth God’s way. Ruth 4:13 states, “So Boaz took Ruth, and she became his wife. And he went in to her, and the Lord gave her conception, and she bore a son.”

Boaz respected God’s order of things. He married Ruth first before acting like they were married. He respected the process. He wanted to be with her, but more than that he wanted to honor the Lord. When God brings your Boaz into your life, he won’t be a perfect man; but he will be a man who desires to love and obey God first and foremost in his life.