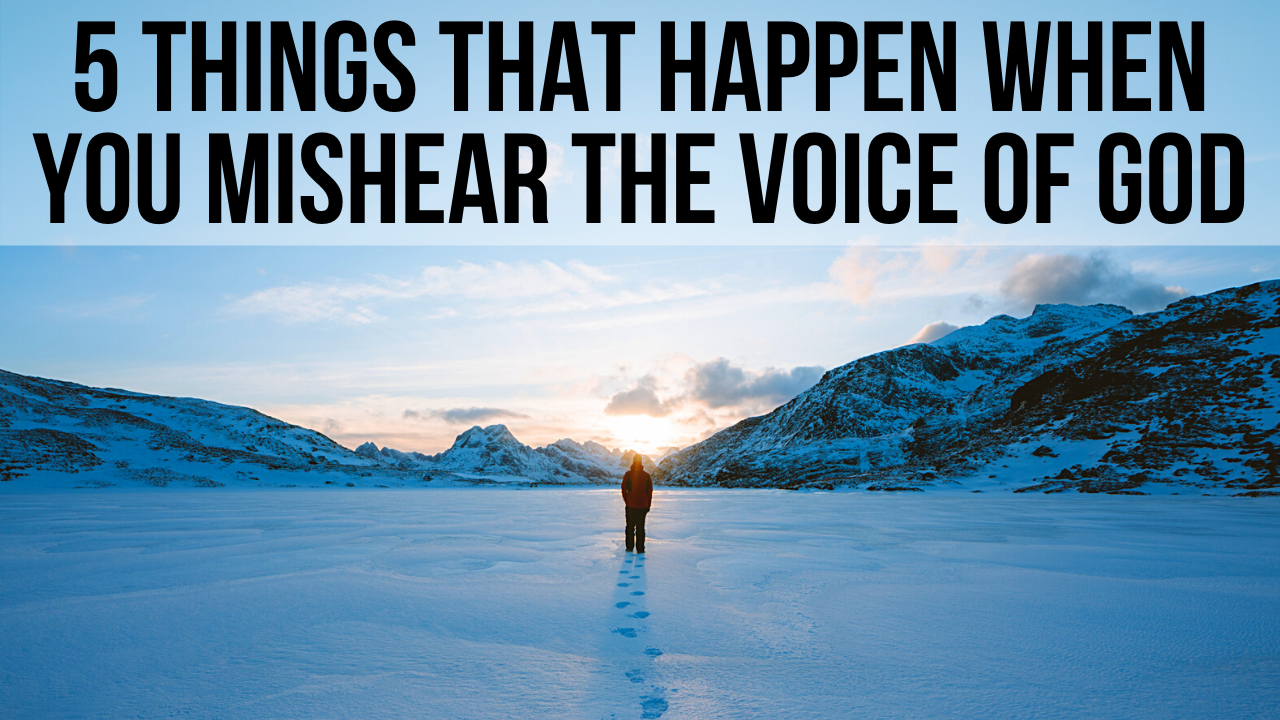 Here are 5 things that often happen when someone has misheard the voice of God.

1. When You Assumed What God Wanted Rather Than Having Actually Asked God What He Wanted, This Results in Mishearing His Voice

One clear biblical example of this can be seen when comparing David and Saul. In 1 Samuel 23, David is on the run because Saul is trying to kill him. While David was running from Saul, he heard of some people in distress. 1 Samuel 23:1-5 states:

Now it was told Saul that David had come to Keilah. And Saul said, ‘God has given him into my hand, for he has shut himself in by entering a town that has gates and bars.’ And Saul summoned all the people to war, to go down to Keilah, to besiege David and his men.”

Saul looked at the events occurring and just assumed he knew what God was doing. Obviously he was wrong. Again, when you keep reading you see how differently David seeks God’s will. 1 Samuel 23:9-14 continues:

David knew that Saul was plotting harm against him. And he said to Abiathar the priest, ‘Bring the ephod here.’ Then David said, ‘O Lord, the God of Israel, your servant has surely heard that Saul seeks to come to Keilah, to destroy the city on my account. Will the men of Keilah surrender me into his hand? Will Saul come down, as your servant has heard? O Lord, the God of Israel, please tell your servant.’ And the Lord said, ‘He will come down.’ Then David said, ‘Will the men of Keilah surrender me and my men into the hand of Saul?’ And the Lord said, ‘They will surrender you.’”

Even when David was right and had accurate information, he still took time to ask God to make sure he was interpreting things correctly. David asked. Saul assumed. If you want to avoid mishearing God like Saul, make sure you take time to truly ask God about things like David did.

2. When Your Path Is Guided By Your Personal Desire, This Is a Sign You Misheard God’s Voice

There’s a debate among Christians about the phrase, “Follow your heart.” Some people say to never follow your heart because Jeremiah 17:9 states that your heart is deceitfully wicked above all things. Others say you should follow your heart when you are made into a new creation because Ezekiel 36:26 states God has given us a new heart that is tender to hearing his voice.

Therefore, with these two verses in mind, I think it just depends on what you mean when you say, “Follow your heart.” If you mean you should follow whatever desires you have because God just wants you to be happy, this sounds more like the Jeremiah 17:9 heart where it is sinful and self-serving. But if you are saying that you should follow God with all of you, like when Jesus said you should love God with all your heart (Matthew 22:37), then that sounds more like the Ezekiel 36:26 heart.

But even with your new heart given to you in Christ, I think it is important to really clarify that even then you should not technically follow your heart. Rather, a more biblical way to say it would be to “follow God with your heart,” meaning your new heart in Christ. It’s not your heart’s desire that you should follow, but this does not mean God just wants religious, rigid duty either. God does call us to follow him and love him with all of our hearts. So don’t ignore your heart but don’t just follow your heart. Rather, love and follow God with your heart. These differences can again be seen by comparing Saul and David. 1 Samuel 23:19-21 states:

Then the Ziphites went up to Saul at Gibeah, saying, ‘Is not David hiding among us in the strongholds at Horesh, on the hill of Hachilah, which is south of Jeshimon? Now come down, O king, according to all your heart’s desire to come down, and our part shall be to surrender him into the king’s hand.’ And Saul said, ‘May you be blessed by the Lord, for you have had compassion on me.’”

Saul thinks the universe revolves around him. Saul even thinks God will bless or curse other people based upon their willingness to serve him. Saul really liked it when this man told him to follow his “heart’s desire,” so much so that he even felt God should bless this man for being so nice to him. This is what crazy people do. They think God and everyone else revolves around them.

Simply read through the book of Psalms and see how differently David treated God. He knew it was his job to worship God and fulfill God’s desires and not the other way around. Saul followed his sinful heart. David loved God with all of his heart.

3. When the Events in Your Life Completely Contradict What You Feel God Said, This Usually Means You Misheard God’s Voice

When you believe in God’s sovereignty as the Bible teaches it, you accept that everything that happens in life is under God’s control. Therefore, you can then look at what happens and get a sense of what God is saying because you know he is the one causing things or allowing things. Notice how the events totally contradicted what Saul felt God was saying to him. 1 Samuel 23:26-28 states:

Really? Just when Saul was about to finally catch David, he suddenly gets warned that his country is getting attacked so he needs to rush over there and let David live another day. If God wanted him to kill David, he would have let him kill David. Obviously the events that occurred prove that Saul misheard God.

Likewise, we need to honestly assess the events in real life to see if we truly heard God or not.

4. When You Only Listen to People Who Tell You What You Want to Hear, You Will Be Mishearing the Voice of God

2 Timothy 4:3 states, “For the time is coming when people will not endure sound teaching, but having itching ears they will accumulate for themselves teachers to suit their own passions.”

As much criticism as we like to give to bad Christian preachers speaking nonsense to their churches, the reality is these bad preachers are not the main problem. Notice this verse does not say that bad teachers will force people to listen to them. No, it says that people will “accumulate for themselves teachers to suit their own passions.” Bad leaders are always a reflection of an unhealthy group of followers.

Likewise, we will easily mishear the voice of God if we only choose to listen to people who are telling us what we want to hear. Again, David and Saul were so different in this respect. We already discussed how Saul listened to the people who encouraged him to kill David because that was his heart’s desire, but notice how David responded when his men encouraged him to kill Saul. 1 Samuel 24:3-7 states:

And he came to the sheepfolds by the way, where there was a cave, and Saul went in to relieve himself. Now David and his men were sitting in the innermost parts of the cave. And the men of David said to him, ‘Here is the day of which the Lord said to you, “Behold, I will give your enemy into your hand, and you shall do to him as it shall seem good to you.’” Then David arose and stealthily cut off a corner of Saul’s robe. And afterward David’s heart struck him, because he had cut off a corner of Saul’s robe. He said to his men, ‘The Lord forbid that I should do this thing to my lord, the Lord’s anointed, to put out my hand against him, seeing he is the Lord’s anointed.’ So David persuaded his men with these words and did not permit them to attack Saul. And Saul rose up and left the cave and went on his way.”

Here we have a positive example of David following God with his heart. God convicted him of even cutting Saul’s robe. Rather than being persuaded to disobey God and follow what his men wanted him to do, David instead persuaded his men to follow God with him.

Those who mishear God are those who surround themselves with people who only tell them what they want to hear. But like David, we must reject ungodly advice even if it is the advice that would most benefit us. We must follow God and not man.

5. If Your Path Is Leading You Into More Unrighteousness, This Is a Sign You Misheard God’s Voice

God’s way will never lead you into more sin. Once Saul realized how righteous David was living and that he spared his life, even he could not deny that he was the one mishearing God and David was the one who was hearing God accurately. 1 Samuel 24:17 and 19 states:

You are more righteous than I, for you have repaid me good, whereas I have repaid you evil. . . . And now, behold, I know that you shall surely be king, and that the kingdom of Israel shall be established in your hand.”