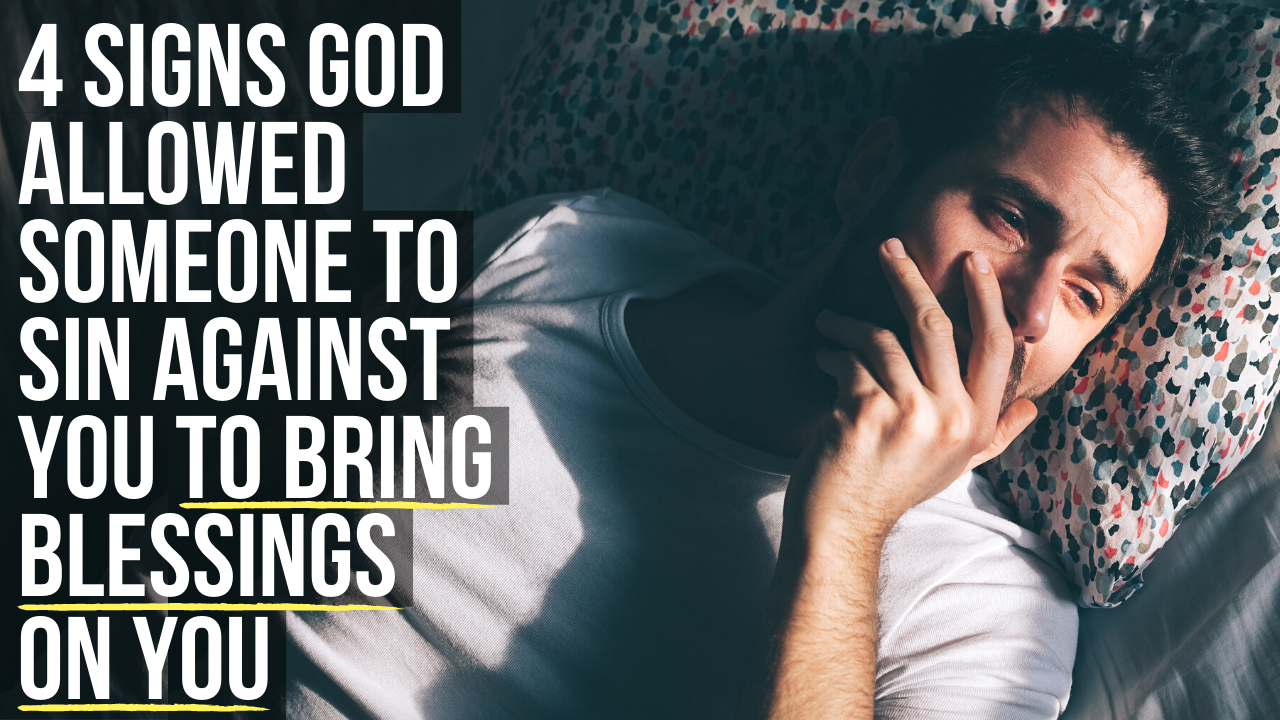 Here are 4 signs God is about to use someone’s sins for your good.

1. If God Is Exposing a Leader’s Sin So He Can Replace Them with Someone Better Suited for Their Position, This Is a Sign God Is About to Use Their Sin for Your Good

The news is constantly full of politicians getting exposed in their corruption. Sadly, the headlines are just as filled with popular pastors and ministry leaders also getting exposed in their sins. This is nothing new. For example, when you read 1 Samuel 2, Eli the priest is allowing his sons who were also priests to live in sin and mistreat the very people they were supposed to be leading and serving.  In 1 Samuel 2:24-26, Eli says to them:

‘No, my sons; it is no good report that I hear the people of the Lord spreading abroad. If someone sins against a man, God will mediate for him, but if someone sins against the Lord, who can intercede for him?’ But they would not listen to the voice of their father, for it was the will of the Lord to put them to death. Now the boy Samuel continued to grow both in stature and in favor with the Lord and also with man.”

Notice that powerful phrase, “But they would not listen to the voice of their father, for it was the will of the Lord to put them to death.” This verse does not mean God was causing them to sin. Rather, throughout the Bible we see again and again that God does not cause sin but he can use sin for his own purpose. In God’s sovereignty he does not cause sin but he can direct the outcome of any event to accomplish the purpose he wants. In this example, God clearly wanted to remove these sinful priests to raise up for himself a faithful priest, Samuel.

Likewise, God often exposes corrupt leaders so he can replace them with better leaders. It’s hard to have a bad boss and go through the drama at work when he is finally getting exposed. It’s difficult to be a part of a church where the pastor finally gets exposed for the corruption he has tried to hide for years. But eventually God will use their bad for good by exposing them and replacing them just as God did before putting Samuel in leadership.

This is good for you because God could be preparing you to take their place or God might just bless you through this new leader you are getting who is about to take their place. David was a blessing to the people he led, but before David could bring good Saul had to fall.

2. If God Is Using Two Sinful People to Bring Judgement on Each Other, This Is a Sign God Is Using Someone’s Sin for Your Good

For example, in Judges 14 we are told that Samson foolishly demands to be married to a Philistine woman, something that was actually a sin. His parents tried to persuade him to marry a godly woman, but he refused. Judges 14:2-4 states:

‘I saw one of the daughters of the Philistines at Timnah. Now get her for me as my wife.’ But his father and mother said to him, ‘Is there not a woman among the daughters of your relatives, or among all our people, that you must go to take a wife from the uncircumcised Philistines?’ But Samson said to his father, ‘Get her for me, for she is right in my eyes.’ His father and mother did not know that it was from the Lord, for he was seeking an opportunity against the Philistines. At that time the Philistines ruled over Israel.”

This is a passage that could be easily abused and misunderstood. This is not justification to disobey the laws of God and become unequally yoked. Rather, this is a passage of Scripture that shows how God can use one person’s sin to bring judgement on another person. If you read the rest of this story, trust me, it will become clear that you do not want to follow in the footsteps of Samson. He ends up marrying this woman, she betrays him, she marries the best man in his wedding, Samson burns her village, the villagers then burn her, and then Samson kills 1,000 men with a donkey’s jawbone.

For more lessons from the life of Samson, you may want to read my article 4 Relationship Lessons We Can Learn from the Life of Samson.

3. God Will Produce Good for You When Slanderers Are Put to Shame By Your Good Behavior in Christ

Ironically, one of the ways God causes his people to shine the brightest is by using the sins and attacks of others to draw attention to his people’s light. 1 Peter 3:14-17 explains:

But even if you should suffer for righteousness’ sake, you will be blessed. Have no fear of them, nor be troubled, but in your hearts honor Christ the Lord as holy, always being prepared to make a defense to anyone who asks you for a reason for the hope that is in you; yet do it with gentleness and respect, having a good conscience, so that, when you are slandered, those who revile your good behavior in Christ may be put to shame. For it is better to suffer for doing good, if that should be God’s will, than for doing evil.”

4. If God Is Magnifying His Gospel Power Through Empowering You to Treat People Better Than They Deserve, This Is a Sign God Is Using Someone’s Sins Against You for Your Good and His Glory

The gospel of Jesus Christ is not God’s Plan B. From eternity God knew that Jesus would need to die on the cross for our sins. As Ephesians 1:4 (NIV) proclaims, “For he chose us in [Christ] before the creation of the world to be holy and blameless in his sight.”

While we can’t fully know the mind of God, we do know that every decision God ever makes is ultimately a decision that will bring him more glory. God saw fit to bring glory to himself through the gospel of Jesus Christ. Likewise, God wants us to bring glory to him by empowering us to treat other people better than they deserve when they sin against us.

Joseph was greatly sinned against by his brothers. But God used their sin as a way to put his grace on display through his servant Joseph. Genesis 50:17-21 starts with his brothers saying to him:

‘And now, please forgive the transgression of the servants of the God of your father.’ Joseph wept when they spoke to him. His brothers also came and fell down before him and said, ‘Behold, we are your servants.’ But Joseph said to them, ‘Do not fear, for am I in the place of God? As for you, you meant evil against me, but God meant it for good, to bring it about that many people should be kept alive, as they are today. So do not fear; I will provide for you and your little ones.’ Thus he comforted them and spoke kindly to them.”

One of the most powerful ways God will turn bad into good is when he empowers his people to treat other sinners better than they deserve. Only God can cause this, so only God will deserve the glory.