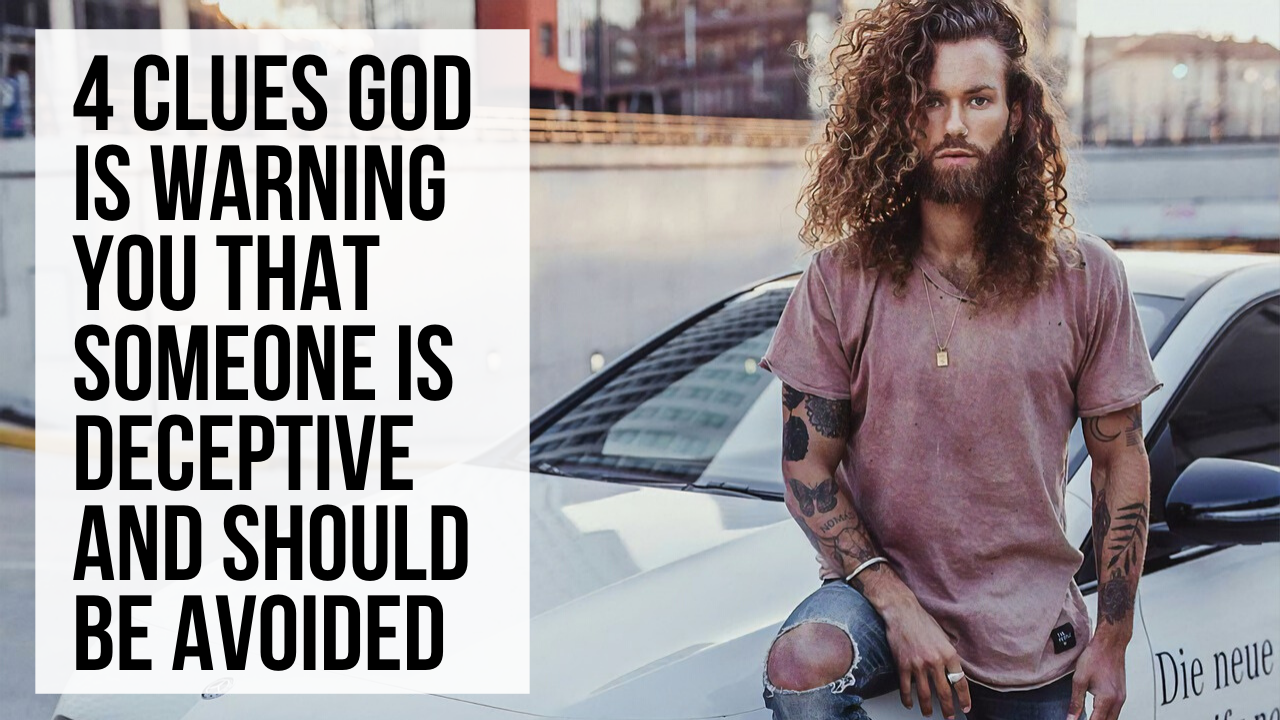 Here are 4 signs God is warning you about a deceptive person.

1. If Someone Claims to Never Be Wrong, This Is a Sign of a Deceptive Person

Much like the political art of getting asked a hard question and then giving a long non-answer, deceptive people are masters at rambling on and on to make themselves look right rather than just saying, “I’m sorry, I was actually wrong about that.”

Rather than admit their wrongs they just try to change the facts around so they look right somehow. While there are certainly times to give a thorough explanation for why we feel we have been misrepresented or misunderstood, if someone always does this that is a big red flag. For as 1 John 1:8-10 states:

2. When Someone Has to Use Verbal Camouflage to Mask Their Bad Behavior, This Is a Sign of a Deceptive Person

We’ve all heard the cliché but very true statement, “Actions speak louder than words.” However, when you have romantic feelings for someone and you really want a relationship to work, it’s so easy to search for explanations that make someone’s bad behavior more acceptable. And the person who will be all too eager to provide those explanations will be the very person whose behavior has been so questionable.

To avoid being deceived, you have to look past all the verbal camouflage this person is trying to use to put a positive spin on their sinful actions. No amount of words can make a bad choice good. Words can make bad seem good, but bad is always bad when you cut through all the nonsense. Notice the link between actions and honest people compared to lots of words and dishonest people.

When words are many, transgression is not lacking, but whoever restrains his lips is prudent.” (Proverbs 10:19)

“Lying lips are an abomination to the Lord, but those who act faithfully are his delight.” (Proverbs 12:22)

It’s very easy to overcomplicate the process of assessing someone’s truthfulness when your emotions and feelings are involved. But when we take a step back and choose to assess the situation with biblical truth and common sense, usually it’s quite easy to detect a deceptive person. With that said, deceptive people are not stupid, so they know the way to deceive people is by messing with their emotions. So if someone is simply appealing to your desire so you will close your eyes to the truth, don’t let them deceive you. Remember what we all learned as kids. It’s simple and overused but it remains true, “Actions speak louder than words.”

3. If God Is Showing You Contradictions in What This Person Has Said Over Time, He Is Exposing Their Deception

The one thing about lies is that the person always has to remember what they lied about, and to keep the lie going they will need to make new lies in the future so they don’t expose the lies they already told in the past. Eventually the human mind can’t keep up with all the false stories one tells and the house of cards always falls down. I like the way Mark Twain put it when he said, “If you tell the truth, you don’t have to remember anything.”

This is so accurate. When someone just tells the truth they won’t need to constantly try to remember what they said in the past. Their story will always be consistent because they are not making it up. Truth doesn’t change. Proverbs 12:19 says, “Truthful lips endure forever, but a lying tongue is but for a moment.”

Someone can trick you for a brief period of time, but eventually they will start to contradict themselves. Don’t give someone the benefit of the doubt if the facts are clearly staring you in the face.

4. If Your Loved Ones Doubt This Person’s Sincerity and Truthfulness, This Could Be God Warning You Through Them

Whoever hates disguises himself with his lips and harbors deceit in his heart; when he speaks graciously, believe him not, for there are seven abominations in his heart; though his hatred be covered with deception, his wickedness will be exposed in the assembly. Whoever digs a pit will fall into it, and a stone will come back on him who starts it rolling. A lying tongue hates its victims, and a flattering mouth works ruin.”

When your loved ones are “assembled” around you, they will help you “expose” the “wickedness” of this deceptive person. You are the one who has to make the choice on who to believe in your life, but it is wise to listen to the counsel of those who have loved you your whole life over the empty words of someone who just came into your life and started all kinds of drama through their deception.

It’s really not that hard to be honest, but it is hard to be keep a lie going. If someone has to work and work to make you believe them, don’t entertain the spin.