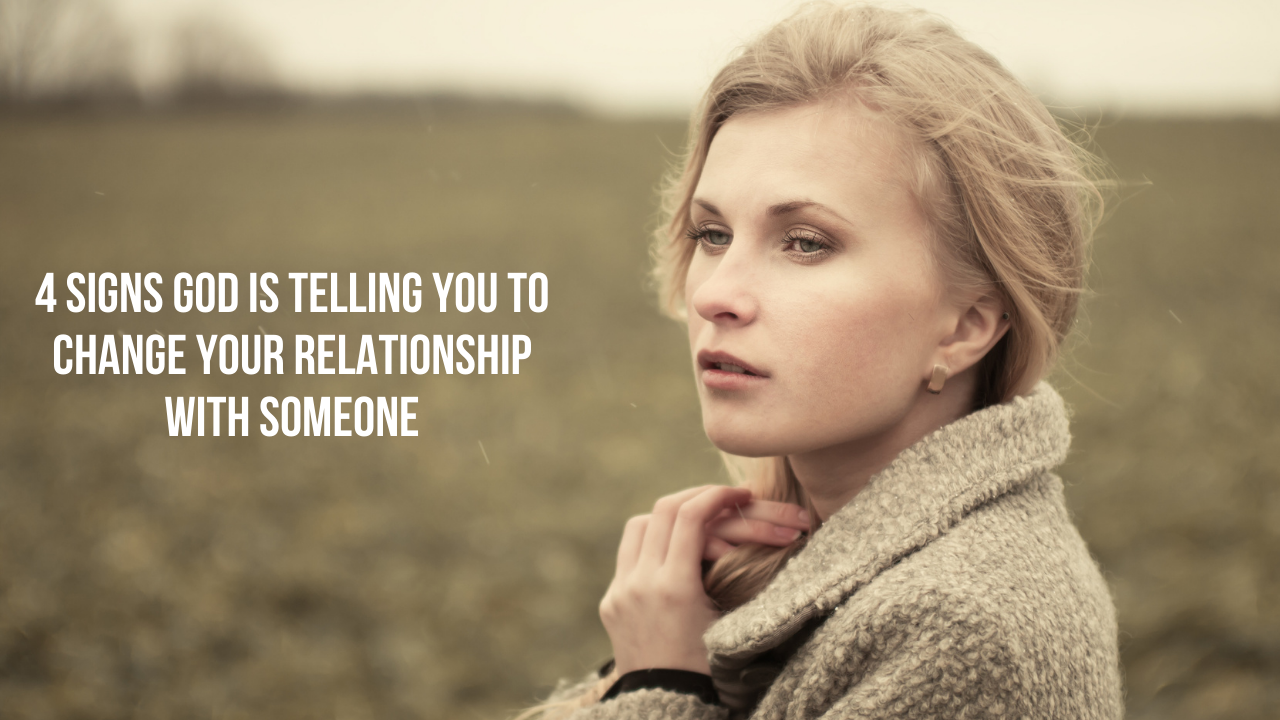 When there’s a problem in a relationship, it’s easy to think there is only one option to solve it. Sometimes this true. But at many other times, there are multiple paths forward that will help you deal with this issue. The only thing God does not want you to do in these instances is nothing.

So here are 4 signs that one way or another God does want you to change your relationship with someone.

1. If You Are in a Perpetual State of Unhealthy Ambiguity with This Person, God Wants You to Change This Relationship One Way or Another

It’s perfectly normal for any relationship to go through a season of ambiguity, meaning you have no idea what this relationship really is or where it is going. Does this person just see you as a good friend or are they sending you signs that they really want something more with you? Was that a date or was that just two friends hanging out? Should you shut down your online dating profile now or is this person you met online not that serious about you yet?

Questions like these are very normal and should be expected. They are not a red flag. They are just a part of the pre-dating process. But when this type of ambiguity persists, that’s when God is telling you to do something about it. We often end up in long seasons of waiting because we are putting the burden of responsibility for clarity on the variables outside of our control. We often expect the other person to make the first clear move of interest, we often expect someone out there to pursue us in our safe bubble rather than leaving our bubbles to meet new people in their bubbles, and we often believe that “just waiting” is always the best way to express our faith in God.

Sometimes it is the other person’s job to share their feelings with you, especially if you already sent some obvious signs yourself. Sometimes the other person does need to pursue you more because you have already played your part in the dance before dating. And sometimes God really is calling you to just keep waiting.

But the Bible isn’t full of relationship formulas we must rigidly follow. Rather, the Bible is full of eternal truth and principles that God wants us to apply in the most appropriate way based upon the unique situational variables we are experiencing.

My point is, if you have been in a long season of not knowing what is really going on with someone, one way or another God wants you to change this. Basically there are two general ways you can change this. One, you can have a Define the Relationship Talk with this person to figure out what is going on. Or two, you can move on and interpret this long season of ambiguity as a sign this is not meant to be.

Patience is a virtue, but passivity is not. Waiting is fine, but waiting forever for clarity is unwise. Eventually, one way or another, if you are confused about someone, something needs to change. Notice the effort God calls us to use when seeking wisdom. Proverbs 2:3-5 states:

. . . if you call out for insight and raise your voice for understanding, if you seek it like silver and search for it as for hidden treasures, then you will understand the fear of the Lord and find the knowledge of God.”

2. If This Person Is Treating You Poorly, God Wants You to Change This Relationship One Way or Another

It’s too simplistic to say that if there is anything unhealthy going on in a relationship this automatically means God wants you to distance yourself from this person. That might be what God says, but if a boyfriend and girlfriend are experiencing an issue and there is a willingness to truly repent by whoever is at fault, then it is also possible God is simply telling you to confront this issue so repentance can take place. But if you confront this issue and nothing really changes, God may then be telling you to fully break it off and move on.

Romans 12:18 explains, “If possible, so far as it depends on you, live peaceably with all.” Sometimes the only way peace is possible for you is to not be around someone. But at other times, if you really love someone and this person is truly ready to change in word and deed, then perhaps God is calling you to give them another chance.

My point is, God will never call you to ignore abuse, toxic behavior, or any other dysfunction in a relationship. He will call you to try to change this. But change can happen through repentance and maturity or it can happen by leaving this person for good so they are completely out of your life.

One way or another though, if someone is treating you poorly, something has to change.

3. If You and This Person Are Causing Sin in Each Other’s Life, One Way or Another God Is Calling You to Change This

When two flawed humans form a relationship together, it is never possible to create something perfect together. Not only will there be sins done against one another, there will also be sins committed with each other. These types of sins can come in all shapes and sizes, but the most common example of this when it comes to a single man and a single woman is sexual sin.

What should you do if you two are committing sexual sin together? There are basically two options. The details will be different for each couple based upon what type of sin is occurring, how far it has progressed, and how long they have tried to stop it, but basically the two options are to break up or get married.

Again, those are the two big buckets that your options fall into. I’m not saying a couple who is not prepared to get married should just get married anyways because they don’t want to breakup but they can’t stop having sex. I’m not saying that if you commit any sexual sin that you must immediately break up if you are not immediately going to get married. What I am saying is that if sexual sin is occurring in a relationship, or any sin really for that matter, it is not an option to just keep everything exactly the same.

The only option Christians have towards sin is repentance. But repentance can take many shapes. You can either turn from sexual sin by putting up better boundaries while dating while you also progress towards marriage, or you can break up so the sin stops. Each of you will need to pray about which one God is calling you to do. But you can be certain God is not calling you to remain in a relationship where sexual sin keeps happening over and over again; for as 1 Corinthians 6:18 makes plain, “Flee from sexual immorality.”

So one way or another, you can be sure God is telling you that something needs to change if sin is occurring between you two.

4. If You and This Person Have Gone Through a Healthy Season of Dating, One Way or Another It’s Time to Make a Change

There’s a phrase my wife uses to help our young children make right choices, “Delayed obedience is no obedience.” I believe God says the same to his children, for as James 4:17 explains, “So whoever knows the right thing to do and fails to do it, for him it is sin.” As Psalm 119:60 also states, “I hasten and do not delay to keep your commandments.”

If you’ve been watching this channel for awhile, you know I believe in a hybrid approach between the two traditional camps among Christians when it comes to pursuing marriage. There is the dating camp and there is the courting camp. I won’t get into all the differences and similarities right now, but let me briefly point out one positive from each camp.

In dating, unlike courting, there is freedom to get to know someone you have a romantic interest in while not feeling overly pressured to know if you for sure want to marry this person. In courting, unlike dating, you are not interested in just endlessly dating but rather you are using this season to look for a husband or wife.

While I prefer to use the term “dating” just because it’s more commonly understood, I believe in a hybrid approach between dating and courting where a couple is free to explore their connection together without instantly feeling a lot of pressure to know if this person is the one; but I also believe a Christian couple should not endlessly date and they should date to figure out if they should get married one day.

The point is, if you know what God wants, one way or the other, something needs to change.