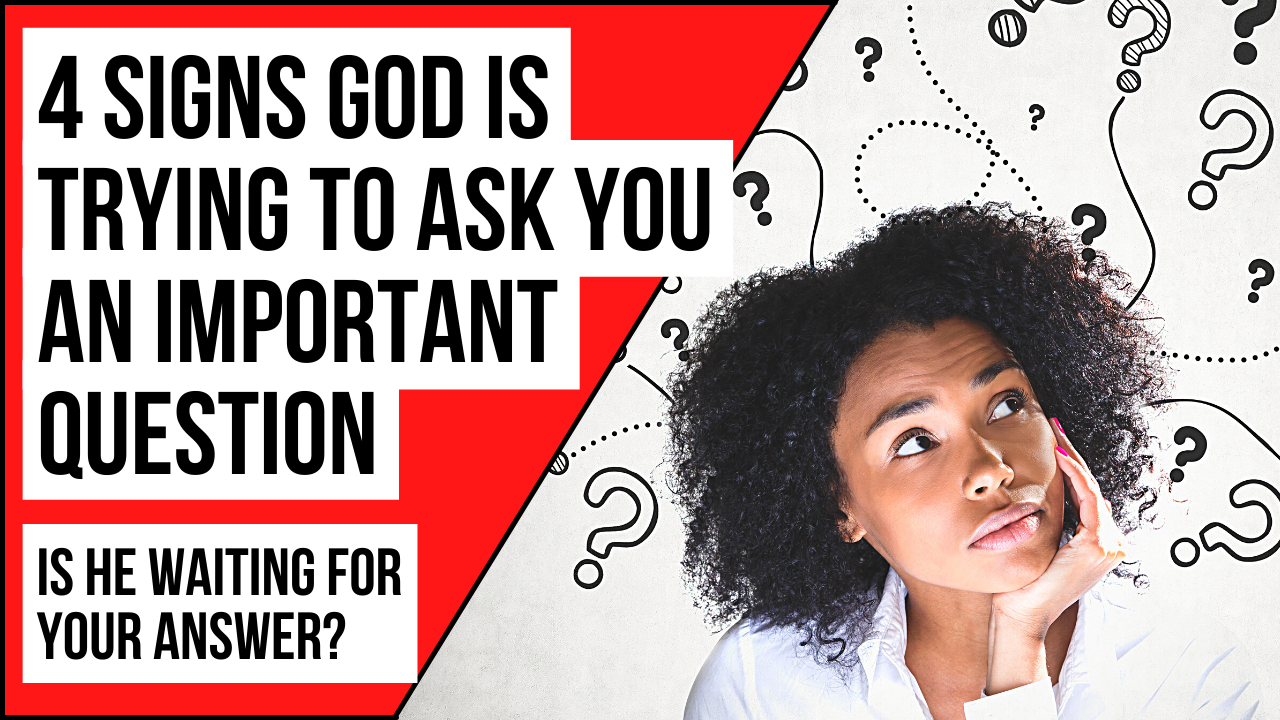 Here are 4 common signs that mean God is asking you something.

1. If You Are Hiding a Particular Part of Your Life from God, This Could Be a Sign the Lord Is Asking You a Question

Perhaps the most famous question in the Bible asked by God is found in Genesis 3:8-9 after Adam and Eve sinned. It says:

I find it interesting that in Genesis 3:7 it states, “Then the eyes of both were opened, and they knew that they were naked. And they sewed fig leaves together and made themselves loincloths.” But then in Genesis 3:21 it also states, “And the Lord God made for Adam and for his wife garments of skins and clothed them.” This has been the pattern ever since sin entered the world. We sin, we try to deal with it ourselves, but God knows that’s not going to work, so he provides the solution himself.

Never hide from God. He always sees the truth anyways. He doesn’t need you to hide because there’s nothing he can’t handle. Bring everything to him. He alone has what you need (Romans 5:15-17).

2. If You’ve Grown Cynical About Getting Something You Know God Could Provide, This Could Be a Sign God Is Asking You a Question

In the waiting, the greatest danger is that you lose your hope in God. Genesis 18:9-15 states:

They said to him, ‘Where is Sarah your wife?’ And he said, ‘She is in the tent.’ The Lord said, ‘I will surely return to you about this time next year, and Sarah your wife shall have a son.’ And Sarah was listening at the tent door behind him. Now Abraham and Sarah were old, advanced in years. The way of women had ceased to be with Sarah. So Sarah laughed to herself, saying, ‘After I am worn out, and my lord is old, shall I have pleasure?’ The Lord said to Abraham, ‘Why did Sarah laugh and say, “Shall I indeed bear a child, now that I am old?” Is anything too hard for the Lord? At the appointed time I will return to you, about this time next year, and Sarah shall have a son.’ But Sarah denied it, saying, ‘I did not laugh,’ for she was afraid. He said, ‘No, but you did laugh.’”

The fact that God knew when Sarah laughed in the tent is evidence God knew where she was. So why did he ask, “Where is Sarah your wife?”

Perhaps God made Sarah feel like she was out of his sight by being in the tent so that he could expose the inner workings of her heart that needed to be corrected.It seems she doubted that God still saw her. Her years of barrenness probably made her feel forgotten by God. Perhaps God wanted to address this lie in Sarah’s heart. Perhaps God wanted to expose this issue so she would know God does see her, that she is not forgotten. God knew why she laughed. God knew there was doubt in her heart. But he needed Sarah to know this. So he set her up so she would do something externally that was a reflection of what was going on in her internally. He asked why she laughed so that she could become aware of the doubt that had formed within her.

Likewise, if you have become cynical towards God because you have been waiting on something you know God could give you, this could be a sign he’s asking you the question, “Why are you doubting me? Is anything too hard for the Lord?” I’m not promising you God will give you what you desire. But I am promising you God is powerful enough to give you what you want. Never allow your heart to grow cynical towards God. He loves you. Never forget that.

3. If You’ve Been Stuck in a Bad Emotional Place for a Long Time, This Could Be a Sign God Is Asking You a Question

God has blessed humans with an incredible ability to adapt and overcome to very difficult situations. When wars occur, for example, normal people end up enduring difficulties they never thought they could. When a mother gives birth to a child with special needs, she will sacrifice herself for her child in the years ahead in ways she may never have thought she was capable of doing. Or perhaps you thought you would be married by now, but decades later you have learned to adapt to a life of singleness. Not only have you adapted, perhaps you have even learned to thrive in this season you never wanted. The ability to adapt and overcome is a great blessing from God.

But, adapting can also warp our hope in greater things. Through adapting, we can begin to settle into the trials this broken world forced us into. We can become complacent. While God does want us to adapt and to do the hard things we need to do to survive, he does not want us to start believing that he is not able to solve the root issue that forced us to adapt in the first place. One example of this can be seen John 5:5-9. It states:

One man was there who had been an invalid for thirty-eight years. When Jesus saw him lying there and knew that he had already been there a long time, he said to him, ‘Do you want to be healed?’ The sick man answered him, ‘Sir, I have no one to put me into the pool when the water is stirred up, and while I am going another steps down before me.’ Jesus said to him, ‘Get up, take up your bed, and walk.’ And at once the man was healed, and he took up his bed and walked.”

Why would Jesus ask a sick person, “Do you want to be healed?” The answer seems obvious. But notice the information provided before Jesus asked this question, “One man was there who had been an invalid for thirty-eight years. When Jesus saw him lying there and knew that he had already been there a long time, he said to him, ‘Do you want to be healed?’” The longer the wait for something good from God, the harder it is to believe God can still do it.

Jesus probably had to ask this man if he wanted to get well because this man had probably adapted to his issues long-ago and gave up the hope of ever being healed. You would think his immediate answer to Jesus would be, “Yes, I want to be healed,” but instead he gave Jesus a reason for why it was impossible.

If you have begone to think something is impossible for God because you have adapted so much to your issues that you no longer believe God can solve the root issue you are dealing with, this could be a sign God is asking you a question, “Do you want to get well? Do you want me to help you with this?”

4. If You Are Being Tempted to Follow the Masses Instead of Your Master, This Could Be a Sign God Is Asking You a Question

As Christians, there’s always going to be a battle over our attention. Will we keep focused on Jesus or will we start following the crowds? Notice the questions Jesus asked in Luke 9:18-20, which states:

Now it happened that as he was praying alone, the disciples were with him. And he asked them, ‘Who do the crowds say that I am? And they answered, ‘John the Baptist. But others say, Elijah, and others, that one of the prophets of old has risen.’ Then he said to them, ‘But who do you say that I am?’ And Peter answered, ‘The Christ of God.’”

If you want to be a follower of Christ, you have to prepare yourself to be the minority on earth. Sin will make us want to follow the crowds so we can be accepted by our peers. But when we start falling to this temptation, God will then ask us, “But who do you say that I am?” When we remember that Jesus is “The Christ of God,” we will remember that our hearts belong to him and thus our whole lives must be his as well. Notice what Jesus then said just a few verses later in Luke 9:23-26. It states:

And he said to all, ‘If anyone would come after me, let him deny himself and take up his cross daily and follow me. For whoever would save his life will lose it, but whoever loses his life for my sake will save it. For what does it profit a man if he gains the whole world and loses or forfeits himself? For whoever is ashamed of me and of my words, of him will the Son of Man be ashamed when he comes in his glory and the glory of the Father and of the holy angels.’”

So if you have been tempted to follow the crowds in this world rather than Jesus himself, this is a good sign Jesus is asking you, “Who do you say that I am?” so that you will remember your heart’s truest desire is to live for him above all else.