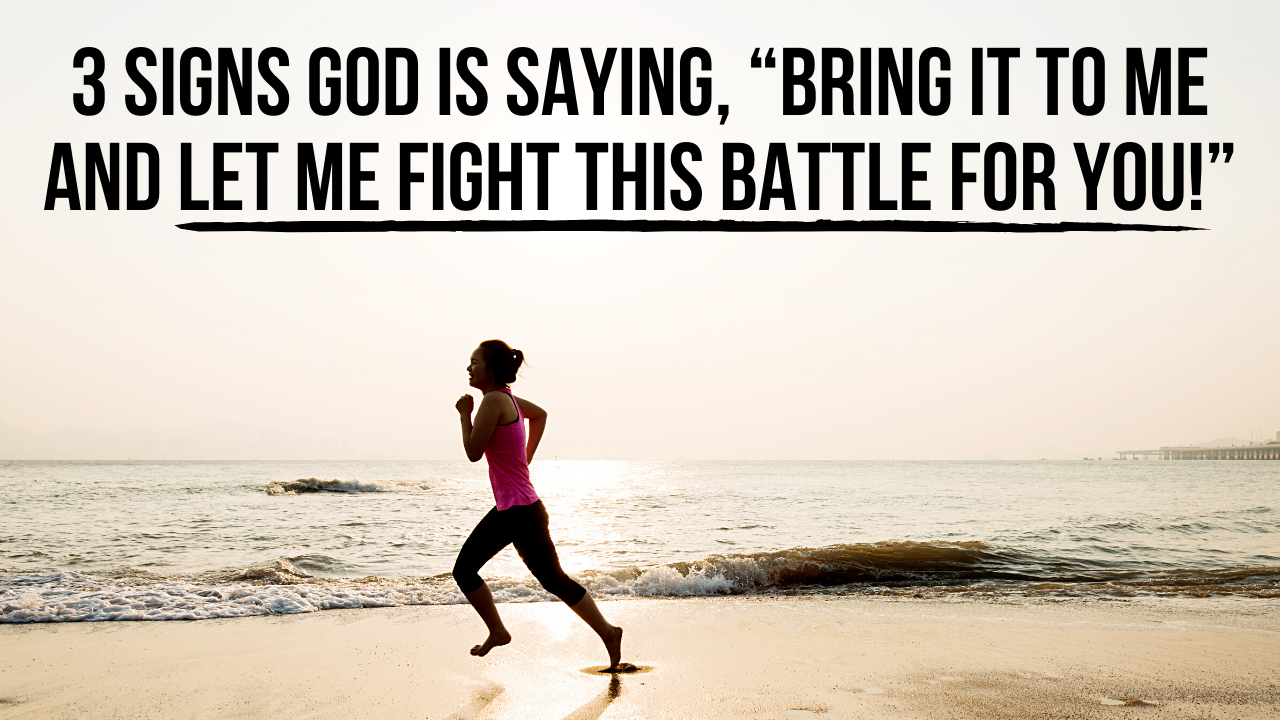 Here are 3 signs that often mean God is telling you to bring a certain battle you are going through to him so that he can fight it for you.

1. If You Are Worried About Obeying God’s Commands to You, This Is a Sign God Is Saying, “Bring It to Me and Let Me Fight This Battle for You!”

Perhaps you are living with your boyfriend or girlfriend but you know the Lord is telling you to move out. But then you say to yourself, “But how will I pay the bills on my own?” Or perhaps you lied at work and you know you need to now tell the truth, but you then think, “What if I get fired if I tell them what I really did?” Or maybe someone you love is living in sin and you sense God telling you to lovingly correct them, but you then say in your heart, “I don’t want this person to get offended and to then be mad at me.”

When God gives us a command in his word, it’s not a conditional command only relevant when there are no natural consequences for being obedient to God. There’s no asterisk anywhere in God’s word that says, “Only obey this command if it is convenient.”

In Luke 14:25-33, Jesus tells us that before you choose to become his disciple, you should first count the cost to decide if you are truly willing to follow him no matter what. Counting the cost is necessary because following Christ is always dangerous. But when God tells us to do something, he has also promised to provide the victory when we obey.

One powerful example of this is when God commanded Moses and Israel to leave Egypt. As soon as they left, the people started to doubt their decision to obey. In Exodus 14:12-14 it states:

‘Is not this what we said to you in Egypt: “Leave us alone that we may serve the Egyptians”? For it would have been better for us to serve the Egyptians than to die in the wilderness.’ And Moses said to the people, ‘Fear not, stand firm, and see the salvation of the Lord, which he will work for you today. For the Egyptians whom you see today, you shall never see again. The Lord will fight for you, and you have only to be silent.’”

God doesn’t promise to always fight every battle we have chosen to enter into ourselves. Rather, God has promised us to fight the battles he has told us to enter into (James 1:25). If you are obeying God’s word but you are beginning to fear the consequences of being an obedient Christian in a godless world, this is a sign God is saying, “Bring it to me and I will fight this battle for you!”

Which leads us into point 2.

2. If You Are Truly Fighting the Lord’s Battle That He Has Called You Into, This Is a Sign He Is Saying, “Bring It to Me. I Will Fight This Battle!”

There are battles God will call you into even though he is the one who will bring the victory. For example, God has called us as Christians to fight for the salvation of lost people. But we also know that only God can truly open the eyes of the blind. God has called you to share the gospel but God alone can make that seed grow and cause someone to be saved by the gospel (Romans 10:14-16, John 6:44).

Again, it’s unbiblical to claim a victory from God when you are in a battle he never called you into. But when you are truly obeying his word and fighting the battles he has truly called you into, he is the one who will bring the victory. In 2 Chronicles 20:15-17 it states:

Notice that it says, “for the battle is not yours but God’s.” Only then does it also say, “You will not need to fight this battle.” This is a historical event, so we shouldn’t claim and apply these words exactly to our lives. But we do see the principle here that if God has called you to be a soldier in his army, ultimately he’s the one who will bring the victories. As Jude 1:24-25 promises:

Now to him who is able to keep you from stumbling and to present you blameless before the presence of his glory with great joy, to the only God, our Savior, through Jesus Christ our Lord, be glory, majesty, dominion, and authority, before all time and now and forever. Amen.”

3. If You Are in a Battle with Sin That Can Only Be Won By Grace, This Is a Sign God Is Saying, “Bring It to Me. I Will Fight This Battle!”

Whether you are fighting sinful fears about a relationship, sinful anxiety about your lack of finances, a sinful lack of self-control when temptation arrives, or a sinful worry about your need for a new job, your sin is the greatest enemy you have. This world will present us with all kinds of issues we will need to fight through, but the main issue that will do the most damage in our lives is our own sin.

There is therefore now no condemnation for those who are in Christ Jesus. For the law of the Spirit of life has set you free in Christ Jesus from the law of sin and death. . . . What then shall we say to these things? If God is for us, who can be against us? He who did not spare his own Son but gave him up for us all, how will he not also with him graciously give us all things? Who shall bring any charge against God’s elect? It is God who justifies. Who is to condemn? Christ Jesus is the one who died—more than that, who was raised—who is at the right hand of God, who indeed is interceding for us.”