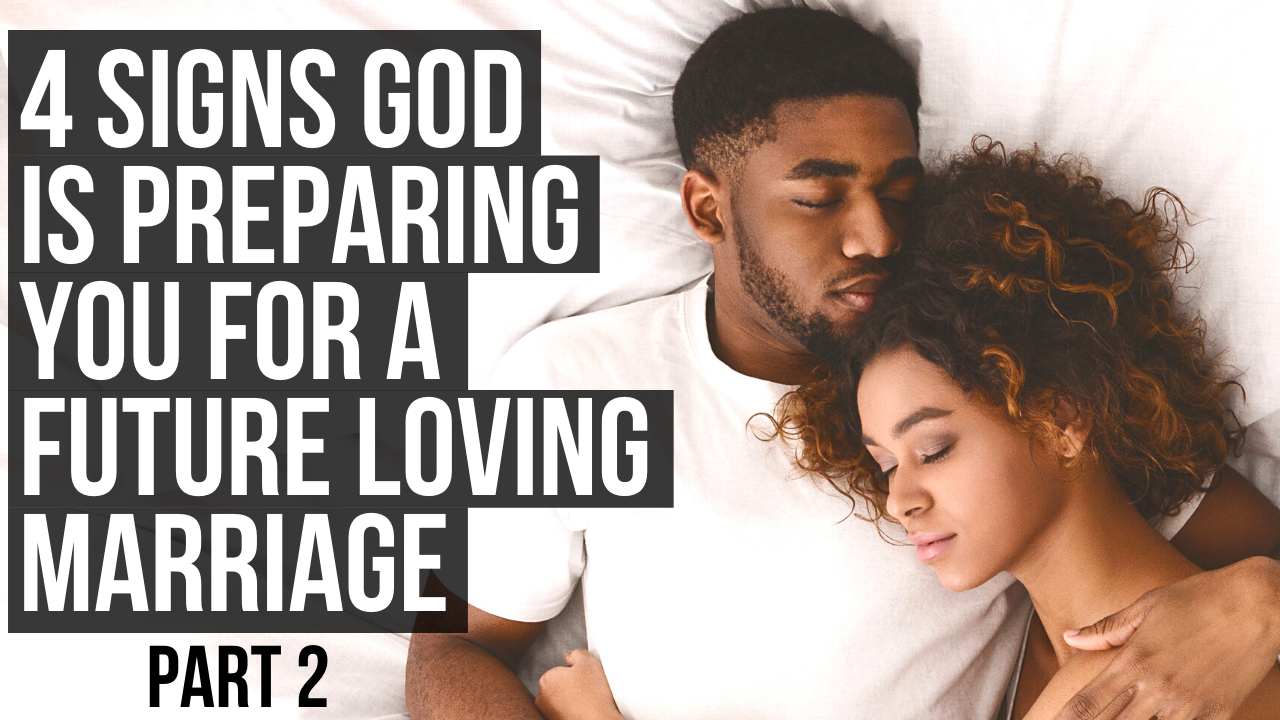 If you haven’t read part one of this series, you can click here to review that content. You can read these articles in either order.

So here are 4 more signs God is preparing you for a loving future marriage.

1. If God Is Teaching You to Show Love to All People of the Opposite Sex Because of Who You Are Rather than Because of Who They Are, This Could Also Be a Sign God Is Preparing You for a Future Loving Marriage

One of the best training practices a Christian single person can engage in to prepare well for their future marriage is learning to serve people of the opposite sex without a hidden motive of romance. Of course you need to be careful so you do not send the wrong signal to someone you are not romantically interested in. And I don’t believe it is wrong for you to have a hidden motive of trying to attract someone that you like as more than a friend because romance and relationships are from God, so it’s not a bad motive to have.

The reason this is such great training for marriage is because it teaches you to show sacrificial love because that love is in you to give rather than because there is something in that other person arousing that love. When you only “love” another person when they are doing something that makes you want to love them, your relationship will eventually become dysfunctional because eventually you will both stop loving each other as hard issues always pop up in any long-term relationship.

To have a healthy marriage one day that is full of love, you have to learn to love your spouse not just because of who they are but rather because of you are. If you take on the role of being someone’s husband or wife, you are committing to loving them because that is your role as a Christian spouse. You are not committing to love them as long as they act the way you want them to act.

So if God is teaching you to show appropriate sacrificial love to people you are not romantically interested in, this could also be a sign he is training you to show love in a future marriage as well. As 1 Timothy 5:1-2 states:

Do not rebuke an older man but encourage him as you would a father, younger men as brothers, older women as mothers, younger women as sisters, in all purity.”

2. If God Is Teaching You to Respect Other People’s Opinions Even When You Disagree, This Is a Good Sign He Is Preparing You for a Loving Future Marriage

There certainly does need to be some high level form of compatibility between a man and woman for them to pursue marriage. Marriage is a biblical option for those who want it and not a biblical command for everyone; therefore, hardwired into the choice to be married is an obvious element of personal satisfaction in someone else that would make you want to choose the option of marriage. It’s not enjoyable to live with someone who you literally disagree with about everything.

Having said that, no matter how much you agree with someone, there will always be some areas that you just don’t see eye-to-eye on. When it comes to big biblical truths, you should seek to marry someone who you agree with. But in the day-to-day conversations between any husband and wife there are countless little landmines that can cause explosive and unnecessary arguments if you are not careful.

To have a healthy marriage, you have to learn to respect someone even when you disagree with them. You have to learn to let people have their own opinions about things that are subjective in nature. You have to learn that just because someone thinks differently than you do does not mean they are claiming you are an inferior person. A healthy couple learns to allow each other to be individuals.

In fact, what I’m talking about is really the bare minimum and not some grand, unattainable goal. For Jesus not only wants us to respect the people we love but who have different opinions than us, he actually tells us to show love to our enemies. In Matthew 5:43-47 Jesus said:

You have heard that it was said, ‘You shall love your neighbor and hate your enemy.’ But I say to you, Love your enemies and pray for those who persecute you, so that you may be sons of your Father who is in heaven. For he makes his sun rise on the evil and on the good, and sends rain on the just and on the unjust. For if you love those who love you, what reward do you have? Do not even the tax collectors do the same? And if you greet only your brothers, what more are you doing than others? Do not even the Gentiles do the same?”

If you need someone to be just like you to love them and respect them, you are not ready for marriage. But if the Lord is teaching you how to value other people and respect them even when you realize they are different than you, this is a good sign he is preparing you for a loving future marriage.

3. If God Is Teaching You When to Just Let Something Go and When You Should Talk About an Offense, This Is a Good Sign He Is Preparing You for a Future Loving Marriage

Some people never bring things up and just let their feelings get hurt for years until they finally can’t take it anymore and they just leave or they explode in anger. Other people go the other extreme and need to exhaustively talk about every tiny little issue all the time, which completely wears their significant other out and makes living with them impossible because they are so sensitive.

To have a healthy marriage, you have to learn to walk with God so you will know when you just need to let something go and when you need to bring something up. For example, Proverbs 19:11 says, “Good sense makes one slow to anger, and it is his glory to overlook an offense.” But in Matthew 18:15 it also says, “If your brother sins against you, go and tell him his fault, between you and him alone.”

So what you should do? Bring it up or let it go? In my application of these truths in the Bible, I believe if someone you are in a relationship with actually “sins” against you, you should bring it up. You don’t always have to make it a big deal, but if you were sinned against forgiveness needs to occur and the person you are dating or married to should know what they did so they can try to not do it again. But there is a difference between being sinned against and just being offended.

If you want to have a big conversation every time you are offended even though nothing actually sinful occurred, you are going to be impossible to live with. Remember, it is “to a man’s glory to overlook an offense” (Proverbs 19:11). This means that one of the ways your maturity in Christ and love for another can shine is by you not taking every little word to heart all the time. Letting things roll off your back now and then is a huge skill to learn in relationships. Agreeableness is very enjoyable to be around. Argumentativeness is not.

Again, it’s not about being mistreated and sinned against. You have to bring sins up. And if there is a pattern of offensive behavior occurring, even if it is not necessarily sinful, you should talk about that so you can enjoy the relationship more. But way too often we get tripped up on little words, tones, inflections of the voice, or read too far into things, assuming the worst rather than the best of someone.

So if God is teaching you how to navigate when to bring things up and when to just overlook an offense, this is a good sign he is preparing you for a loving future marriage.

4. If God Is Teaching You How to Love Someone Without Needing to Be the Center of Their World, This Is a Good Sign God Is Preparing You for a Future Loving Marriage

Yes, a husband and wife should prioritize each other in ways that they do not do with any other person on earth. There should be a very exclusive nature to their relationship because a husband and wife have a unique bond that is just between the two of them.

But taken too far this can turn into something God did not intend. A husband and wife only play one role in each other’s lives. We all need friends, parents, mentors, pastors, brothers, sisters, and so on. And ultimately God, not your spouse, should be at the center of your life and God, not you, should be at the center of your future spouse’s life.

As Colossians 1:16 states of Christ, “. . . all things were created through him and for him.” So if God is teaching you how to love someone and be loved by someone without needing to be the center of their universe, this is a good sign he is preparing you for a healthy loving marriage.