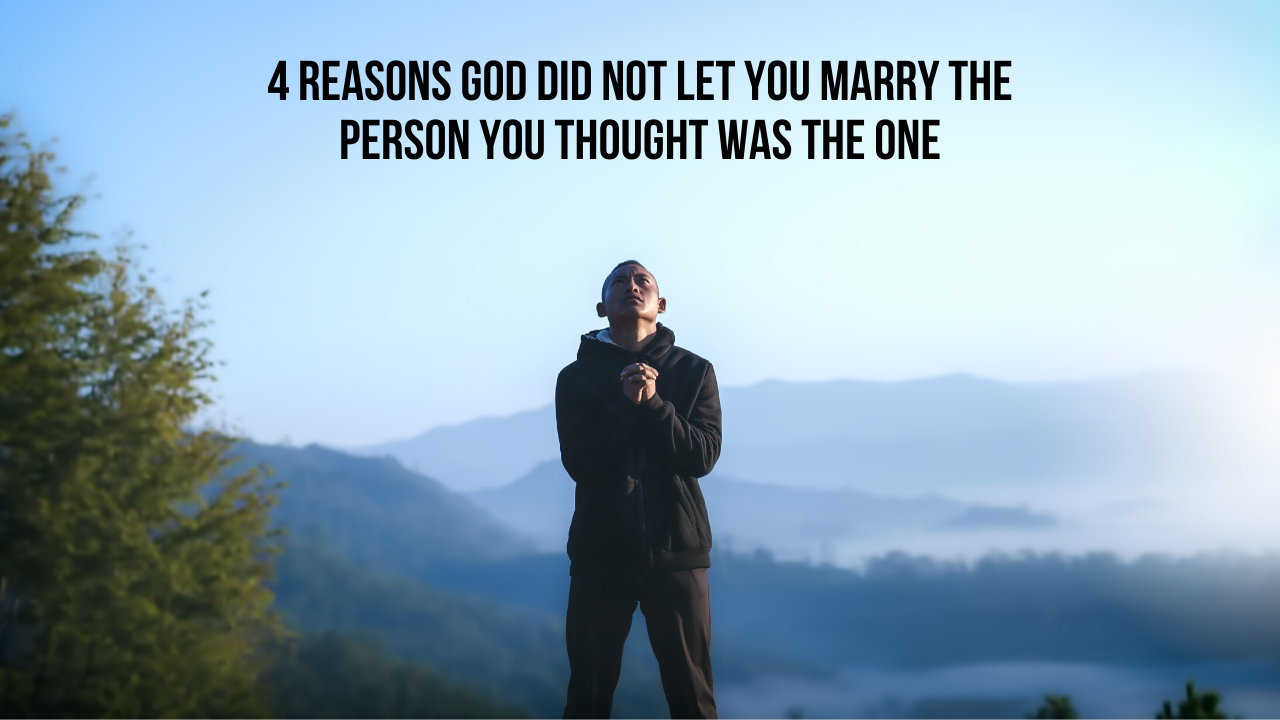 Here are 4 possible reasons for why God did not let you marry someone you thought was “the one.”

1. God Could Have Not Let You Marry Someone You Thought Was “The One” Because He Led You Into That Relationship for a Different Reason

While it would be great if we always knew exactly why God did or did not do something, many times this type of divine peek behind the curtain is never given to us. However, while it’s common to not instantly know God’s purpose in every particular life situation, it is often easier to know what his purpose is not.

So let’s say you prayed and prayed about a particular person you really liked and you felt like God was leading you towards this person and that you two would eventually get married. But then through very clear circumstances and interactions with this person it becomes obvious you two are not going to marry like you thought you would one day. So why did God even let you get your hopes for a relationship that did not work out?

Again, that question is much harder to answer than turning the question around into a statement like this, “It’s now clear to me that God let this all happen in my life for some other reason besides this person and I getting married one day.” While we are certainly responsible for the choices and actions we make in life, throughout the Bible we also see the clear principle that God is sovereign and causes the outcomes he wants through our free actions.

As Proverbs 16:33 states, “The lot is cast into the lap, but its every decision is from the Lord.” This verse does not mean God wants us to roll dice and he will speak to us through the numbers we get. Rather, it means that there is a principle at play in this world God made; and that principle is that while humans are free to make choices, God is still ultimately in control.

Thus, when we come back to our question at hand, it is biblically accurate to deduce that God has a purpose for what occurred between you and this person, but that purpose was not marriage. What was that purpose? We may not know specifically, but generally there are principles that should guide us, like Romans 8:28, “And we know that for those who love God all things work together for good, for those who are called according to his purpose.”

2. God Could Have Not Let You Marry Someone You Thought Was the One to Give You Courage to Follow Him in the Future Trials Ahead

One possible good outcome of you not marrying someone you thought was the one is that through this very painful and confusing season in your life, God can show himself faithful to you and thus strengthen you to live with even more courage for future steps of faith he will ask you to take. Whenever you do end up meeting, dating, and marrying the one God has for you, it will not be without confusion and more pain. Every relationship is a challenge because every relationship involves two imperfect people.

One imperfect person plus another imperfect person will never equal a perfect relationship. You will need courage and faith to walk through all the winding roads that God will use to lead you towards his will for your future marriage if he does want you married one day.

When we experienced God’s faithfulness in the past, it causes us to live with more faith in the present. Therefore, it could be that God is increasing your fortitude and courage through this trial to get you ready for the future he has for you. We can see this principle at play in the life of David. Psalm 78:70-72 (NIV) states:

He chose David his servant and took him from the sheep pens; from tending the sheep he brought him to be the shepherd of his people Jacob, of Israel his inheritance. And David shepherded them with integrity of heart; with skillful hands he led them.”

Before God let David shepherd his people, he trained David through shepherding his animals. Likewise, before God required the faith in David to defeat Goliath, God showed himself faithful to David out in the fields. 1 Samuel 17:33-37 states:

And Saul said to David, ‘You are not able to go against this Philistine to fight with him, for you are but a youth, and he has been a man of war from his youth.’  But David said to Saul, ‘Your servant used to keep sheep for his father. And when there came a lion, or a bear, and took a lamb from the flock, I went after him and struck him and delivered it out of his mouth. And if he arose against me, I caught him by his beard and struck him and killed him. Your servant has struck down both lions and bears, and this uncircumcised Philistine shall be like one of them, for he has defied the armies of the living God.’ And David said, ‘The Lord who delivered me from the paw of the lion and from the paw of the bear will deliver me from the hand of this Philistine.’ And Saul said to David, ‘Go, and the Lord be with you!’”

Notice that David was transitioning out of his season of training in the fields and stepping into his new calling on the battle field. He said, “Your servant used to keep sheep for his father.” God was building on David’s past. It wasn’t a fresh start when David went from tending sheep to fighting wars. It was a progression of faith in God. These two seasons were different in David’s life but there is a clear relation too. God wasn’t changing David’s path. He was progressing David forward on the path he had for him.

David was ready to face Goliath because he remembered the faithfulness of God in his past. He said, “And when there came a lion, or a bear, and took a lamb from the flock, I went after him and struck him and delivered it out of his mouth. And if he arose against me, I caught him by his beard and struck him and killed him. Your servant has struck down both lions and bears, and this uncircumcised Philistine shall be like one of them, for he has defied the armies of the living God.”

Notice David continued to progress more and more in faith because God was progressively training him more and more in his life. He said, “The Lord who delivered me from the paw of the lion and from the paw of the bear will deliver me from the hand of this Philistine.” God didn’t have him face Goliath first and then the lions and bears. God progressively trained David through having him face lesser foes first so he would be prepared for the greater foes ahead.

I can’t tell you how many people have contacted me with a version of a question like this, “Why would God lead me to date someone he knew I wouldn’t marry. Why did God tell me this person is “the one” but then not allow this relationship to work out?”

In many cases, questions like this are starting with a flawed premise. When you are asking why God said something to you, you are assuming God actually did say that to you. While certainly it is possible to hear God rightly and still be confused about what happens next, what is more common is that you did not hear God correctly and thus what happened next did not mesh well with what you felt you heard God say.

I’ve talked about this topic before, so you can watch this playlist of videos if you want more information on how God will reveal the one to you. In short, however, it is crucial that what you feel God says to you in your heart also matches what God has certainly said in the Bible and that God will cause to happen in the circumstances of your life. If these three do not match – the Bible, the Spirit’s words to you, and the circumstances of your life – this usually means you misheard God’s voice.

As James 1:5 states, “If any of you lacks wisdom, let him ask God, who gives generously to all without reproach, and it will be given him.”

4. God Did Not Let You Marry Someone You Thought Was The One Because Marrying This Person Would Not Have Resulted in the Most Good for You and the Most Glory for God

Going back to the big picture we discussed in point 1, we don’t always know exactly why God does what he does. However, there are big truths in the Bible that we can always stand on no matter what. One of those principles is that God always does what will be best for you and what will bring him the most glory. As Jeremiah 32:40-41 (NLT) states:

Therefore, in all things, we can be confident that God has a greater plan even when his plan is not what we originally thought it would be.