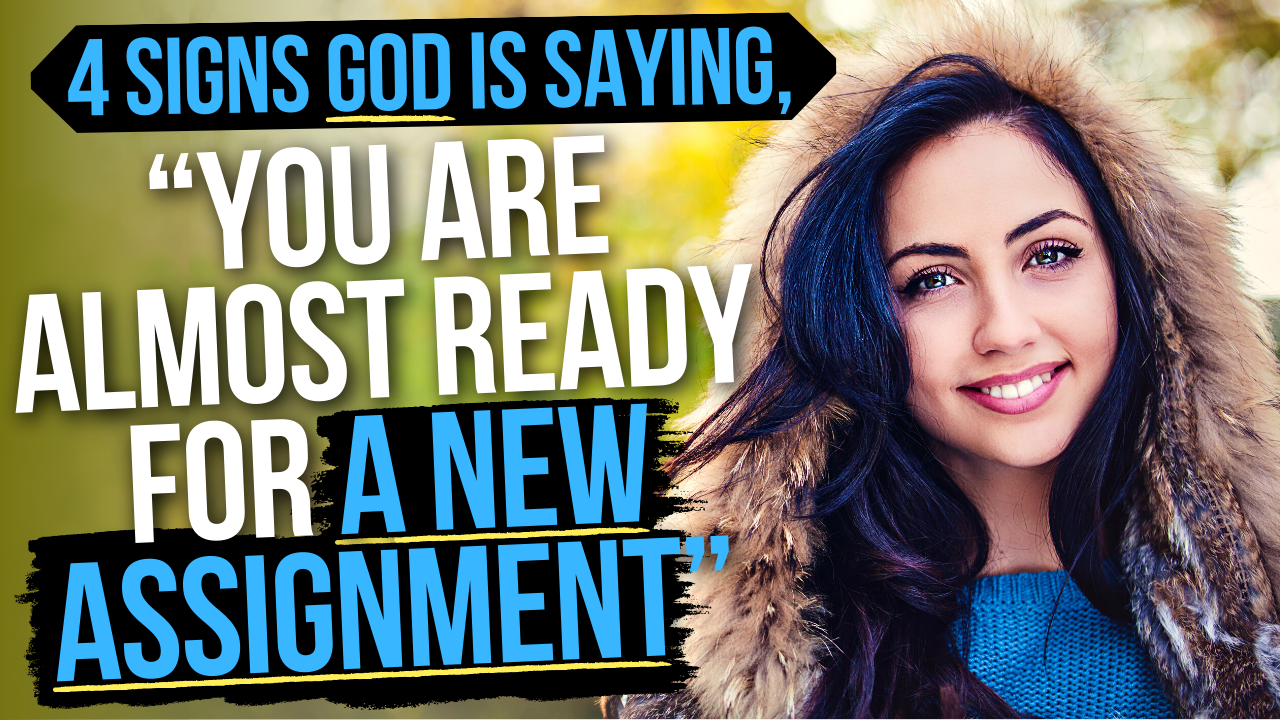 Is God about to change his assignment for you? Will you know how to prepare for this change and how to properly follow the Lord’s leading once it’s time?

Here are 4 signs that usually mean God is saying, “You’re almost ready for a new assignment.”

1. God Will Anoint You Before He Moves You

It’s so easy to look at other people in the world around us, or to even look at characters in the Bible, and to then admire the assignments God has given to them. All we see, however, is where they are now. We don’t often see the winding paths that God used to lead them to those positions.

And there’s one man in the Bible that had a very favorable position, but he had many hurdles and twists and turns to go through before he arrived in this desirable assignment. Who was this man? King David. We use the title “king” before his name now, but we mustn’t forget that when we first meet David in the Bible, he was actually a young shepherd boy. Before God moved David away from the fields of sheep and onto the fields of battle, first he anointed him (1 Samuel 16:13).

Now you would think that as soon as God anointed David to be King, God would then instantly give him that new assignment. But this is where we are in for a big surprise. Not only did David get anointed before becoming king, but he was anointed to be king and then God left him in the assignment of still shepherding his father’s sheep.

Therefore, if you crave a new assignment, you need to start using your new anointing in the assignment you are in right now.

2. Your Heart Will Change Before Your Assignment Changes

Now we need to notice where David’s anointing took place. It took place in the presence of a sacrifice (1 Samuel 16:5-6). I believe this is a foreshadowing of how the sacrifice of Christ is the sole reason God blesses any of us with an anointing to do his work.

We all fall into the trap that Samuel fell into. When he saw David’s oldest brother, he said, “Surely the Lord’s anointed is before him” (1 Samuel 16:6). But God said:

Do not look on his appearance or on the height of his stature, because I have rejected him. For the Lord sees not as man sees: man looks on the outward appearance, but the Lord looks on the heart.” (1 Samuel 16:7-8)

Likewise, you may feel God will never anoint you for a mighty assignment because you do not feel you are worthy. And the truth is, you’re not worthy. None of us are. David wasn’t worthy either. He was the youngest in his family, thus the least worthy to be chosen as king. And yet God chose him because his heart was right. And through the sacrifice of Jesus and the crucifixion of our flesh, God can make our hearts right too (Romans 8:1-8).

You may not be the best looking, the smartest, the most eloquent, or the wealthiest. But none of that matters in God’s economy. As Paul said of himself in 1 Corinthians 15:9-10, which states:

For I am the least of the apostles, unworthy to be called an apostle, because I persecuted the church of God. But by the grace of God I am what I am, and his grace toward me was not in vain. On the contrary, I worked harder than any of them, though it was not I, but the grace of God that is with me.”

3. You Will Need to Do a Bit of Both Before You Fully Get Your New Assignment

Most people never get past the mere dream of a new assignment because they are unwilling to have more than one assignment at a time.

Many want to be a musician, and so they quit their day job and give it a shot. But then when the money runs out and they need a new day job, they assume they are not called to be a musician.

Many want to get married, but when one dating relationship doesn’t work out, they assume this means no relationship will ever work out for them; they then quietly resign to a life of unwanted singleness.

Many want to be promoted at their place of employment, but when their boss asks them to do extra work in their current assignment, they say no or they do it begrudgingly.

4. God Will Give You the Courage to Seize Your New Assignment Even When It Looks Foolish to Others

When David left that final morning before his assignment changed, there is no indication that he knew his life was about to be altered forever. It simply states, “And David rose early in the morning and left the sheep with a keeper . . .” (1 Samuel 17:20). He was being dutiful and responsible. He left the sheep in someone else’s care, making sure his current assignment was not being neglected for his future assignment.

But then when the moment came and God put it on David’s heart to make the jump from shepherd to full-time warrior, notice how instantly David made this jump. He said to Saul, “Your servant used to keep sheep for his father. And when there came a lion, or a bear, and took a lamb from the flock, I went after him and struck him and delivered it out of his mouth” (1 Samuel 17:34-35).

It’s comical to me when I think about David’s statement to Saul, “Your servant used to keep sheep for his father.” When did you “used” to keep sheep, David? Oh, just this morning! But David had already switched his mindset. He knew his assignment was changing. As he saw Goliath taunting God’s people, the Holy Spirit prompted David to act even though it looked like madness to everyone else.

Notice too that God led David to use what he had already learned rather than adapting to a new strategy. Saul wanted him to wear armor and take a sword, but at this point in David’s journey, God had trained David in a different way. One day David would pick up the armor and sword, but now God had only taught him how to trust him with the staff and rock (1 Samuel 17:38-40). This is another example of how God’s changes in our lives happen over time and not all at once. It’s often a process.

If you are being faithful in the process of sanctification, this means your growing. And if you keep growing, oftentimes God gives you a new assignment so he can continue to use you in greater and greater ways, just like he did throughout David’s life.