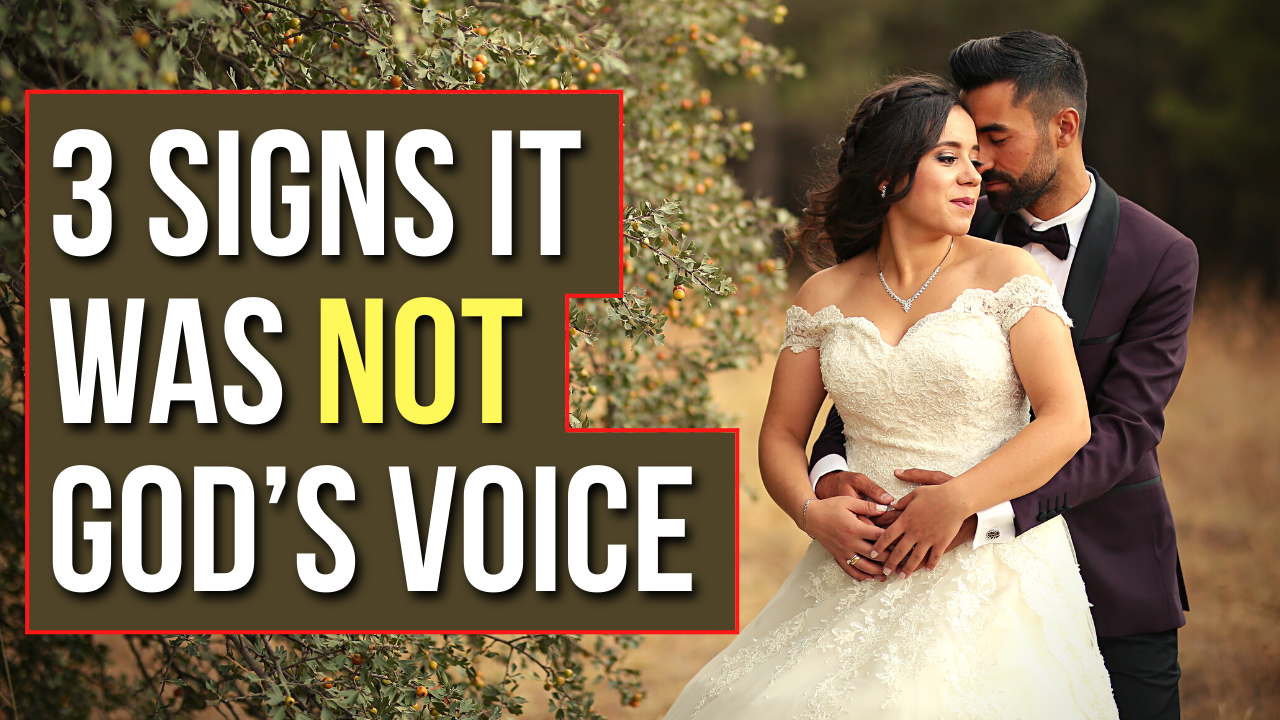 Here are 3 common ways people mistakenly believe they heard the voice of God when in fact they did not.

1. God Does Not Speak Through Bible Verses Taken Out of Context

God’s word can be applied in many different ways. But God’s word always has one original meaning that never changes, “The grass withers, the flower fades, but the word of our God will stand forever” (Isaiah 40:8). So we need to be careful that before we try to apply the word of God to our lives that we have first correctly understood the intended meaning of a verse.

One great example of this is Jeremiah 29:11, “For I know the plans I have for you, declares the Lord, plans for welfare and not for evil, to give you a future and a hope.” This was a verse to the Jews who were exiled in Babylon. While it’s right to take the principle from this verse that God has a good plan for his people, it would be wrong to apply this verse to all people at all times since there are many curses and consequences mentioned in the Bible for those who reject God and live in sin.

For example, you can’t have sex with your boyfriend or girlfriend and then say, “I know this relationship will still be healthy because God has a good plan for me.” God’s good plan for you includes you submitting to God and turning from sin (James 1:12, 25). If you repent and follow Christ in this relationship, you can be a healthy couple. But it’s not going to go well if you are rejecting God.

When Peter was talking about Paul’s letters, he wrote in 2 Peter 3:16, “There are some things in them that are hard to understand, which the ignorant and unstable twist to their own destruction, as they do the other Scriptures.” Paul said to Timothy in 2 Timothy 2:15, “Do your best to present yourself to God as one approved, a worker who has no need to be ashamed, rightly handling the word of truth.”

When we mishandle God’s word, which occurs when we take verses out of context to make them mean what we want God to say to us, we are mishearing the voice of the Lord.

2. God Does Not Speak Through Us Attaching Our Own Meaning to Random Events

Many times we are so desperate to hear the voice of God that we look for signs in ways that God is not actually speaking through (Luke 17:22-23).

When you want God to tell you if a stranger you just met is your future spouse and then you see a wedding dress advertisement on a billboard, you might say to yourself, “This means God is giving me a yes, the timing of that billboard with my question must mean this is my future spouse.” Or maybe you have a dream about someone and then you interpret this to mean God wants you to be in a relationship with this person you dreamed about.

Interpretation is a deadly game. Through interpretation, we can alter reality in our own minds to mean whatever we want it to mean. The problem with this, however, is that our interpretation does not change reality. It simply changes our perception of reality. A false interpretation causes you to live a lie.

Seeing that billboard says nothing about this stranger’s character. God won’t tell you to marry someone without first pointing out biblical reasons that would make this marriage holy (1 Corinthians 7:39). Your dream could just be a dream. You could just as easily interpret this dream to mean Satan is trying to deceive you into marrying the wrong person.

Real signs from God come through his word and through verifiable evidence that confirms reality. In other words, when God says something, it actually happens in real life. If something only is true in our own mind and not in the world around us, it’s not actually true. It’s just our own hopeful thinking.

3. We Misheard God If We Are Interpreting His No as a Need for More Faith

Satan often wraps his temptations in camouflage to make them resemble a test from God. Satan tempts while God tests. One way they differ is that a temptation always involves an enticement to sin while a test is always an offer for you to express your faith.

For example, if you are wondering if God wants you to date an unbeliever so that this person becomes a Christian and then you could marry them, this would be a temptation presenting itself as a test because the Bible clearly states not to be unequally yoked (2 Corinthians 6:14). God would not test you by telling you to disobey his word.

Sometimes God is just saying no, but because we don’t want to hear his no, we interpret it as “just wait and have more faith and then I will say yes.” When a relationship isn’t working out, it’s probably God just saying no. When someone rejects you, it’s probably not God telling you to wait longer for this person. When you need to invest more money into a bad business idea that is already causing bad debt, it’s not a sign of faith to throw more money into this bad idea.

You can’t just change the will of God because you have so much faith. True faith is expressed when you accept God’s no even when you wish he was saying yes.