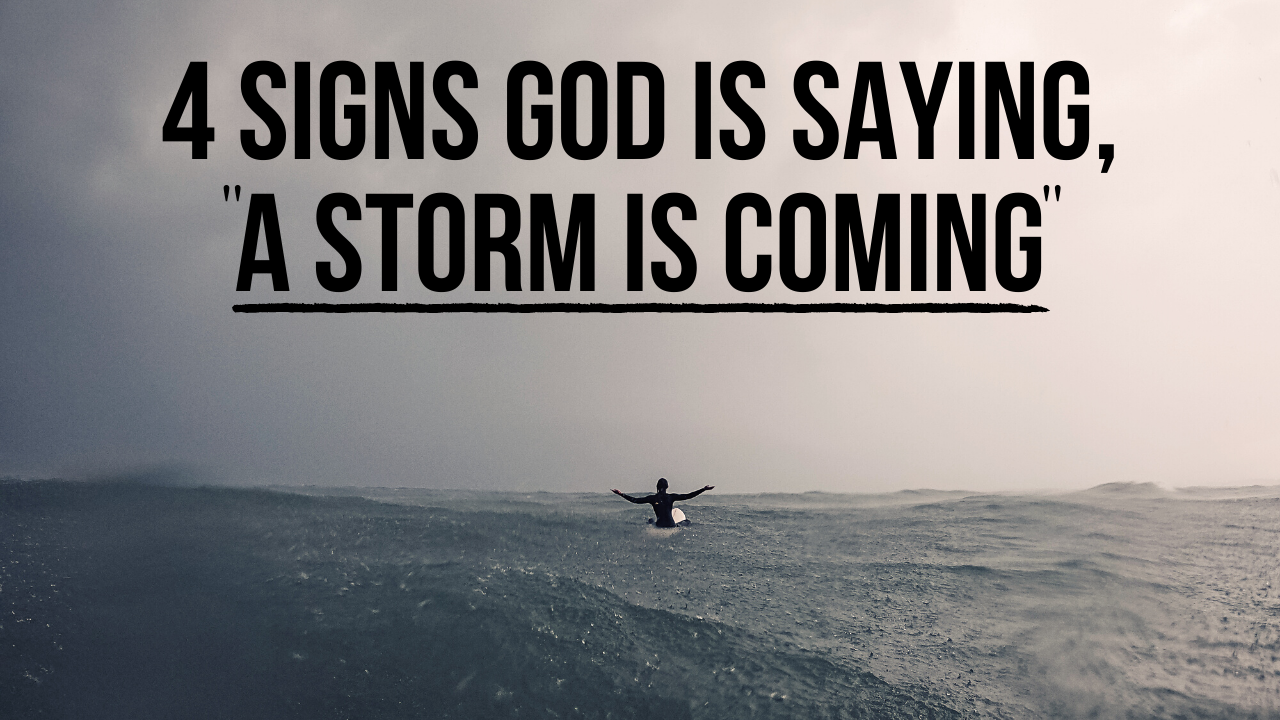 Here are four common instances that mean God is warning you that a storm is coming into your life soon.

1. If God Is Giving You a Season of Peace Right Now, He’s Also Saying, “A Storm Is Coming”

We have a saying about the weather here in Cleveland Ohio, “If you don’t like it, just wait 5 minutes.”

Life can be a lot like that. There are nice days and there are stormy days, but rarely are there long stretches of sunny or stormy days.

This was really the premise for the words Jesus spoked to us in Matthew 7:24-27. Notice how Jesus did not say “if” the rains come. Rather, he said “the rain fell”:

So enjoy the sunny weather in your life, but don’t forget to prepare for the storms too, because they always come.

2. If You Are Running from God, a Storm Is Coming

God said to Jonah, “‘Arise, go to Nineveh, that great city, and call out against it, for their evil has come up before me.’ But Jonah rose to flee to Tarshish from the presence of the Lord” (Jonah 1:2-3). Jonah 1:4 (NIV) then states, “Then the Lord sent a great wind on the sea, and such a violent storm arose that the ship threatened to break up.”

God loved Jonah too much to let him run forever. God’s purpose for Jonah was too important to not bring the storm. Likewise, God loves us too much to let us run forever. His purpose for you is too important. In love, after he has given us time to repent but we still have not done it, God sends the storms to turn us back to him. As Psalm 107:25-31 states:

For he commanded and raised the stormy wind, which lifted up the waves of the sea. They mounted up to heaven; they went down to the depths; their courage melted away in their evil plight; they reeled and staggered like drunken men and were at their wits’ end. Then they cried to the Lord in their trouble, and he delivered them from their distress. He made the storm be still, and the waves of the sea were hushed. Then they were glad that the waters were quiet, and he brought them to their desired haven. Let them thank the Lord for his steadfast love, for his wondrous works to the children of man!”

3. When God Wants to Reveal More of Jesus to You, He Often Brings a Storm

There are multiple accounts in the New Testament where Jesus calmed an actual storm. But why did he do this? Notice the statements from the disciples after each account. In Mark 4:41 it states, “And they were filled with great fear and said to one another, ‘Who then is this, that even the wind and the sea obey him?’” In Matthew 8:27 and Luke 8:25, it basically says the same thing. And in Matthew 14:33, when Jesus walked on water to them during the storm, it states, “And those in the boat worshiped him, saying, ‘Truly you are the Son of God.’”

The storms in our lives are never meaningless. They point us to Jesus. When we turn to Jesus and he delivers us again and again, it reveals more and more of his character to us.

4. If You Need a New Community, God Will Often Bring a Storm

Throughout the Bible, God often used storms and water to wipe away evil and deliver his people. Noah and his family were surrounded by evil people until God brought the flood and saved them (Genesis 6). When God set the Israelites free from Egypt, he wiped away their enemy by causing the Red Sea to consume them (Exodus 14). When God delivered Abraham and Lot from the wickedness surrounding them and moved them to a new place, Genesis 19:24 states “Then the Lord rained on Sodom and Gomorrah sulfur and fire from the Lord out of heaven.”

If you need a new community, sometimes God uses a storm to remove the old and bring in the new.