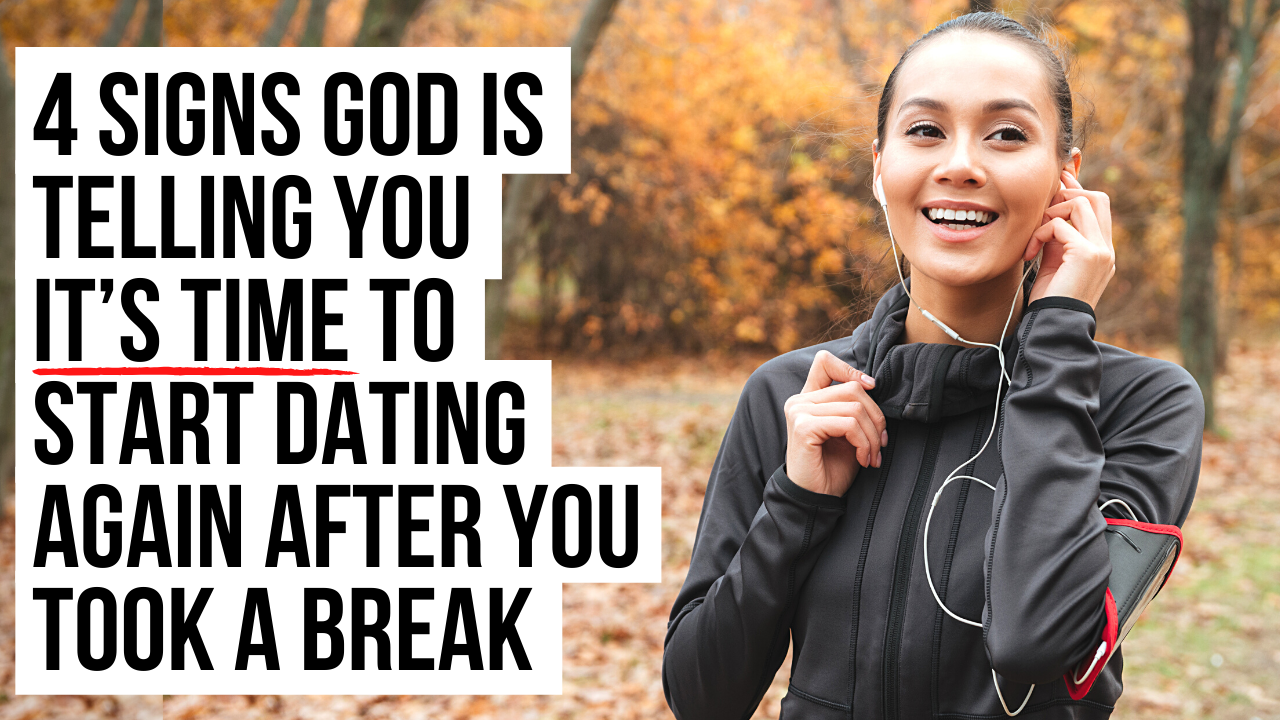 Perhaps you sensed God telling you to take a season of time where you just focused on him and purposely did not seek to be in a relationship. Or perhaps you broke up with someone and you knew you needed some time to heal with the Lord.

But how will you know when this season of fasting from dating should be over? Here are 4 signs God is telling you it’s time to start trying to date again after you took a break for a while.

1. If Your Season of Not Dating Has Accomplished It’s Intended Purpose, This Is Often a Sign God Is Telling You to Start Being Open to Dating Again

When God does tell someone to stop dating for a period of time, there is a specific goal God wants that person to achieve through this defined season of fasting from dating.

Once the specific goal has been achieved, God will then have that person move onto a new season of life. We can see this principle in 1 Corinthians 7:5 when Paul was talking to married couples. He states:

Do not deprive one another, except perhaps by agreement for a limited time, that you may devote yourselves to prayer; but then come together again, so that Satan may not tempt you because of your lack of self-control.”

Paul is telling husband and wives that they should only take a break from focusing on each other for a specific purpose – to pray and realign their hearts to God. But once that goal has been achieved, God then wants them to go back to normal in their marriage because God designed those who are called to marriage to function best in marriage.

Likewise, if you are a Christian single person who senses the call to be married one day, this means God may call you to stop pursuing marriage for a specific period of time but not forever. Once you have accomplished the reason for taking a break from dating, God will then lead you to reengage your pursuit of a godly relationship for his glory.

2. If You Are Choosing to Not Date Because You Are Fearful of Getting Hurt Again Even Though You Want to Be Married One Day, This Is Often a Sign God Is Telling You to Be Open to a Relationship Now

As we just mentioned in point 1, when there is a good reason to take a break from dating, God will often lead you to do that. On the flipside, one sign that God is not the one leading you to take this break from dating is when your reasoning for it is unhealthy. In other words, when your motive is fear based rather than faith based, this is a good sign God is not the one leading this decision.

In 1 Corinthians 7:7 when referring to the gift of singleness and marriage, Paul said, “But each has his own gift from God, one of one kind and one of another.” And in 1 Peter 4:10 (NIV) it states, “Each of you should use whatever gift you have received to serve others, as faithful stewards of God’s grace in its various forms.” Some are designed to serve God better through singleness and some are designed to serve God better in marriage. But both are called to receive these different gifts with the same motive – to glorify God.

While we should avoid pain when possible, the avoidance of pain is not a biblical motive for singleness. So if deep down you really do know God designed you more for a life of marriage rather than a life of singleness but you have been purposely avoiding relationships out of fear rather than out of faith, this is often a sign God is leading you to start actively pursuing a relationship again.

3. If You Have Regained a Healthy Desire and Motive for Marriage, This Is a Sign God Is Telling You to Start Dating Again

This is similar to planting new crops after a devastating storm wiped out the last batch. If the farmland was once ripe and fruitful but was devastated and destroyed, it will take time for the new crops to start growing again. For a while the farmer will have to treat his new crop delicately so it has time to grow back fully to what it once was.

Likewise, when your heart was hurt, it’s natural for the desire for marriage to disappear for a while. You have to give yourself time to heal. But once you start to heal, over time those good desires will start to grow back again. So when a time away from dating and relationships has allowed the healthy desire to grow back, this is often a sign God is telling you it’s time to move into a new season of pursuing a relationship again.

As Song of Solomon 8:4 (NIV) states, “Daughters of Jerusalem, I charge you: Do not arouse or awaken love until it so desires.”

4. If Not Dating Is Actually Preventing You from Following God’s Leading in Your Life, This Is a Sign God Is Telling You to Start Dating Again

Hebrews 11 is often referred to as the Hall of Faith. In this passage we are given a list of notable people mentioned in the Bible who showed great faith in the Lord: Able, Noah, Abraham, Isaac, Jacob, Sarah, Moses, Rahab, and many others. But all of these people had obstacles in their path as they followed God’s will for their life. So when we get to Hebrews 12:1-2 (NIV) we too are told:

Therefore, since we are surrounded by such a great cloud of witnesses, let us throw off everything that hinders and the sin that so easily entangles. And let us run with perseverance the race marked out for us . . .”

This “great cloud of witnesses” are those mentioned in Hebrews 11 who came before us. Each of them had a different “race marked out” for them just as we all have a unique “race marked out for us” as well. But what we all must do is follow the path God has laid out for each of us by “throw[ing] off everything that hinders.”

When we apply this passage to our context at hand, some of us are called to singleness and some of us are called to marriage. If you are called to marriage, you need to throw off anything that is hindering you from following God’s leading in your life. Thus, if your season of fasting from dating has served its purpose and now it is actually hindering you from following the race marked out for you by God, it’s time “throw it off” to move out of that season and into a new season with the Lord.