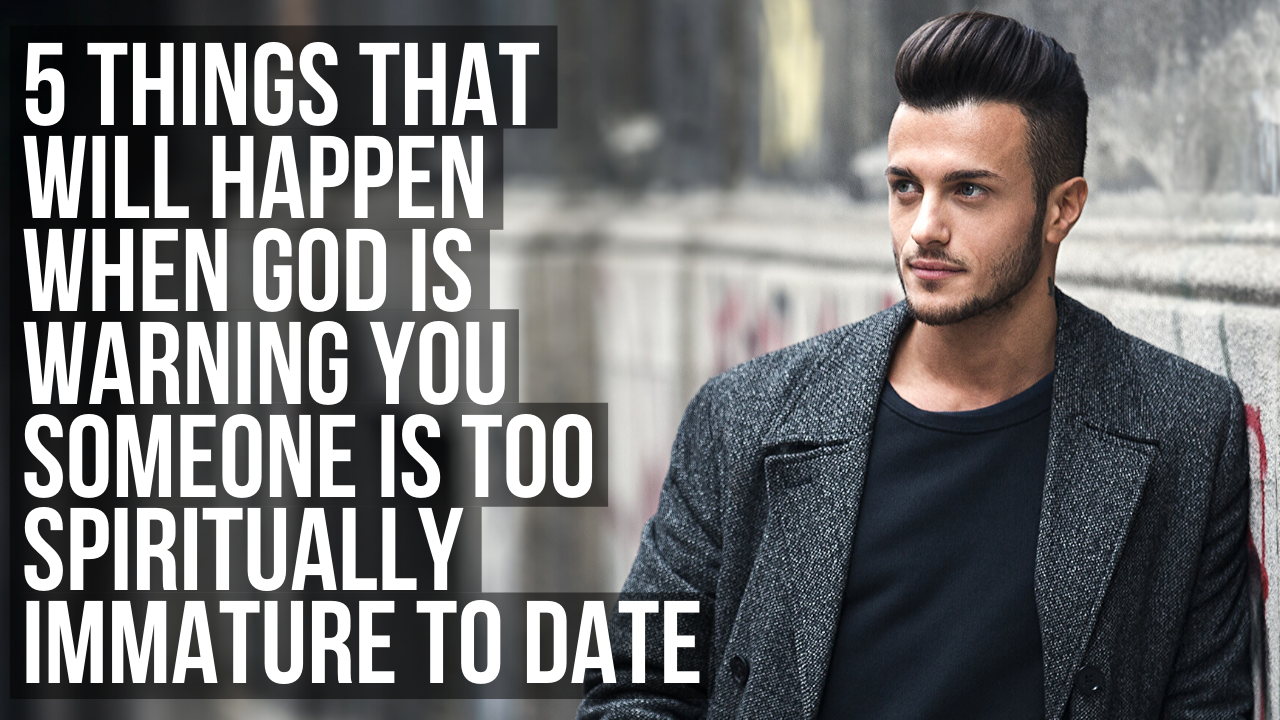 Here 5 things God will often show you when he is trying to tell you that someone is not spiritually ready for a godly relationship.

1. God Is Showing You Someone Is Not Spiritually Mature Enough to Date If They Accept Your Christian Beliefs Only Because They Feel It Is Right to Accept All Religious Beliefs

Modern society has identified tolerance of all ideas as the highest form of maturity one can attain. However, from a biblical perspective this is actually a sign of immaturity and spiritual blindness. If all ways to God are true then there is no truth because so many of these beliefs contradict. No, according to Scripture Jesus Christ is the only way to be saved. In other words, Christianity is actually very exclusive. It states that not only is Jesus the only way to God but that all other paths are the wrong way.

2. God Is Showing You Someone Is Not Spiritually Mature Enough to Date If They Are Just a “Sunday Morning Christian”

Another common tactic by the enemy is to tempt Christian singles to believe going to church is the ultimate sign that someone is mature enough for a godly relationship. While God has called Christians to actively participate in a local body of believers, attendance on Sunday morning is not a strong sign of the Spirit reigning in someone’s life.

Church attendance is very important, but without bearing the fruits of the Spirit outlined in Galatians 5:22-24 throughout the rest of the week, this is a sign going to church is not having any effect on this person. Going to church is not a good deed itself. Rather, it is a means by which God will empower us to do good works. It is a place for us to serve and get fed to serve. If we just attend and that’s it, we are missing the point.

When you really want to date someone, you will be tempted to look for any signs that this person is actually mature enough for a godly relationship. Satan will tempt you to overvalue small things like listening to Christian music, praying before meals, and have the Bible App on one’s phone as signs from God this person is ready to be a godly spouse.

Don’t be fooled. If this person is just a “Sunday morning Christian” they are not prepared to be a mature Christian in a mature godly relationship.

3. God Is Showing You Someone Is Not Spiritually Mature Enough to Date If They Put You on Hold Until God Gives Them a Supernatural Sign to Date You

Sadly, one trend that is very common amongst Christian singles in the church today when it comes to dating is waiting for a supernatural sign from God before making any form of a commitment to someone they have been talking to. This is a sign of immaturity for a variety of reasons.

First, a mature Christian does not allow an emotional connection to form with another single person unless they already know they are in a season where God has released them to explore a dating relationship. It is a big sign of immaturity when someone shows obvious interest in you but then tells you something like, “I can’t date you because I sense God telling me to just focus on him right now.”

A mature Christian would already have known God did not want them to date before allowing a connection to grow with you. There’s nothing wrong with not dating if you sense God leading you to just focus on him; but if that is the case, you should not be emotionally orbiting other singles and then needing to tell them you can’t date right now. If you are actually focusing on God and fasting from dating you won’t get so close to someone where you will need to explain this to them. If you need to tell someone you just need to focus on God and not date, you did something wrong that allowed you to get that far to being with. It’s fine if you don’t want to continue a relationship with that person, but to claim you just need to focus on God right now shows you were not walking with God before getting to this point. In short, when someone basically says, “It’s not you, it’s God” as the reason for breaking things off with you, this is a sign of immaturity.

The second reason it is a big sign of immaturity if someone is waiting for a grand, supernatural sign before moving forward at all with you is that this is a lack of faith. I’m not saying that Christians should just walk into the unknown and claim they are walking by faith. I’m just pointing out that when you need an abundance of confirmation to take a small step of faith, this is a sign of a lack of faith. So if someone is treating going out to coffee like a marriage proposal, if someone is treating dating like engagement, or if someone is putting unnecessary pressure on something simple like a phone call – this is a sign they are too immature to date right now.

We shouldn’t not be judgmental towards other Christians who struggle in this area. I believe this is such a problem because most churches don’t know how to teach people to rightly apply the word of God to dating and singleness. They look at passages about marriage and directly apply them to dating, which is biblically unwise. Many who teach a strict courting mentality put so much pressure on a relationship early on that it becomes almost impossible for two Christian singles to get to know one another to see if they should progress into a more serious relationship.

All that to say, you want to look for someone who is taking the dating process seriously but is not so afraid of making a mistake that they become frozen and unable to take the slightest step forward until they get a huge sign form God. God will never remove all the risk out of relationships by telling you your entire future.

4. God Is Showing You Someone Is Not Spiritually Mature Enough to Date If They Need You to Agree with Them About All of Their Beliefs

In point 1 we talked about the danger of being too accepting and acting like all truth is right when clearly that is impossible. Another sign of immaturity however is the need for everyone to agree with you about everything you believe about the Bible.

Something I heard Albert Mohler talk about that has really helped me over the years is the idea of there being three tiers to theological differences. A tier 1 issue is a matter of salvation. If you get one of these issues wrong it means you are not a Christian. So obviously when it comes to dating you should align perfectly in this tier. Things like who is Jesus, how is one saved, and the Trinity are examples of tier 1 issues.

Tier 2 issues are theological topics that directly impact how you operate your church on a weekly basis. Things like the sacraments, male and female pastors, and the biblical roles within marriage are examples of tier 2 issues. Christians can disagree with each other here and still call each other brothers and sisters in Christ, but these differences are extreme enough where they will not be able to attend the same church and function weekly in ministry together. In most cases I recommend dating someone who agrees with you on these types of issues.

A tier 3 issue, however, is something that is in the Bible but Christians can disagree about it and it not really affect how they do ministry together. It is a big red flag of immaturity if someone you are dating needs you to agree with every little belief they have. If someone wants to form you into their own image rather than help you grow more into the image of Christ, this is a sign God is telling you this person is too immature to date.

As 2 Timothy 2:23-24 states, “Have nothing to do with foolish, ignorant controversies; you know that they breed quarrels. And the Lord’s servant must not be quarrelsome but kind to everyone . . .”

5. God Is Showing You Someone Is Not Spiritually Mature Enough to Date If They Want You to Be “Their Savior” Rather Than Depend on Jesus with You

It’s not wrong for someone to observe you to see if you are spiritually mature enough to date. You both should be doing this to each other in a loving way because you both are responsible for your own hearts (Proverbs 4:23). However, sometimes Christians start looking for perfection in one another because they sense something lacking in themselves.

For example, a man could be obsessed with marrying a virgin because he has made sex an idol in his own heart. He needs sex to make him feel like a strong man. Or he may want a woman with a perfect past because he feels so guilty about his own past. A woman may want a man with every spiritual gift under the sun because she is so afraid of marrying someone like her father who was not a good Christian. If she needs you to be an expressive type while also being the strong silent type, it probably means she wants you to be her everything – which is idolatry.

My point is, a mature Christian will not need you to be perfect because in humility they will have an accurate view of themselves too. Pride demands perfection in others because it blinds us to the flaws in ourselves. Pride makes us think we are perfect and thus we expect others to be perfect too.

If someone needs you to be Jesus, don’t date them – they aren’t ready. Look for someone who is mature enough in the Lord to know that God’s grace is the most important part of any healthy Christian relationship.

For more on this topic, you may enjoy the article 4 Tips When Dating Someone Less Spiritually Mature Than You.