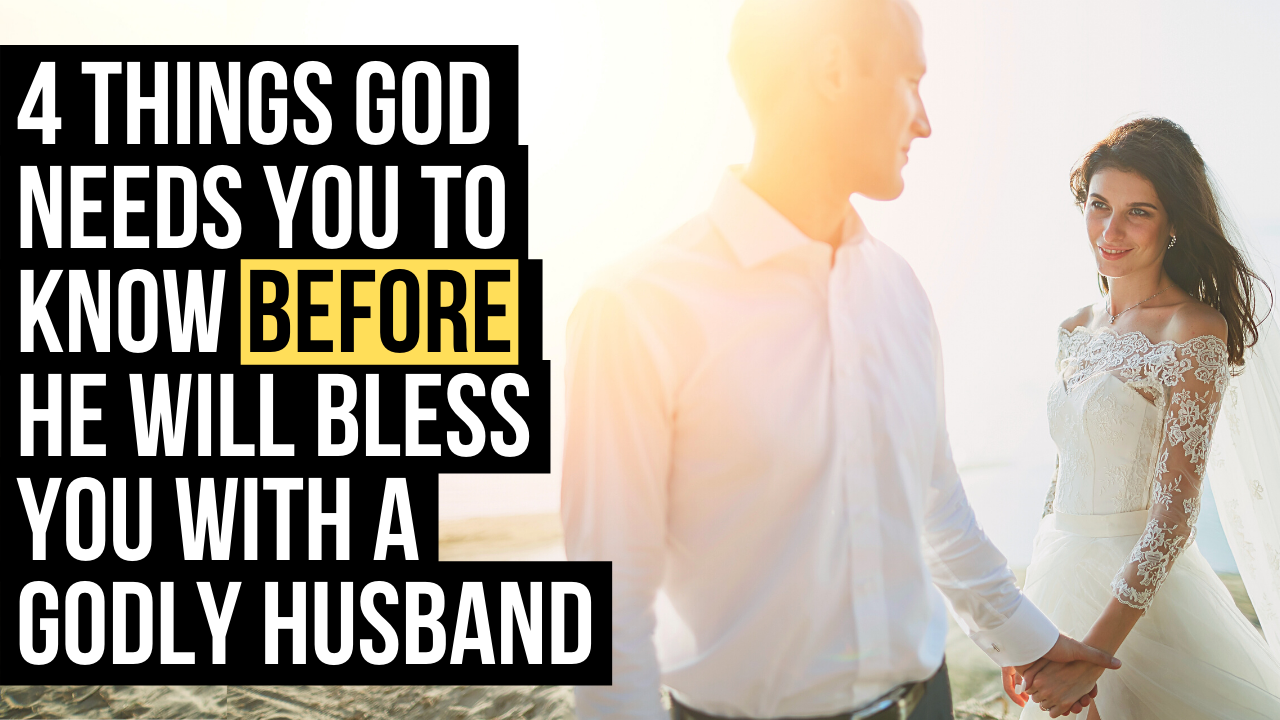 1. If You Want a Christian Husband One Day, God Wants You to Become the Type of Woman Who Will Allow this Man to Serve and Protect You

When functioning properly in his male Christian identity, a man will enjoy the pursuit that will be required to win the woman God has for him. He will want to send thoughtful gifts, come up with creative dates, and learn what makes her tick so he can speak her love language.

But one of the reasons a man desires this type of experience in dating before marriage is because it is a sign to him of what type of woman she will be like if they do get married. When a single man dreams about being a good husband one day, he thinks about leading his wife through serving her and protecting her.

This term “leading” has been abused by many because they imagine a Christian man will act like a worldly man, so they imagine “leading” to mean dominate, possess, and control. But that’s not at all what a good man desires nor is that what God designed him to crave. Rather, God made a man to offer his strength in love. He needs to be needed by his wife. If he feels like she has no healthy dependency on him, he will feel unloved by her. As 1 Peter 3:7 explains:

Likewise, husbands, live with your wives in an understanding way, showing honor to the woman as the weaker vessel, since they are heirs with you of the grace of life, so that your prayers may not be hindered.”

Whenever this verse is quoted people get hyper focused on that one word “weaker.” But notice it is impossible for Peter to be saying she is less than or worse than a man because he also states a man is called to show “honor to the woman” and that she is an equal heir with the husband to God’s gifts.

My point is, God designed a man to treat his wife with tenderness and to protect her with his strength. This verse is not about the weakness of a woman. It’s not highlighting her lack of strength because it’s not true that she lacks strength. Rather, this verse is an instruction to men on how they should treat their wives. It’s not about the wife. It’s about the husband’s behavior towards her.

A godly man wants a woman who will let him obey this command in 1 Peter 3:7 so that he can serve her and love her as Christ loves the church.

2. If You Want a Godly Husband One Day, You Must Learn How God Designed a Christian Man to Desire a Woman Who Respects Him

When it comes to men, their love language is respect. This is why in Ephesians 5:33 is states, “. . . let the wife see that she respects her husband.” It’s important to note that this is the wife’s choice to make. Notice this verse is directed towards the wife. It’s not the job of a husband to demand respect. It’s the job of a wife to willingly offer respect to her husband just a husband must willingly sacrifice for his wife as stated in Ephesians 5:25. And if you read this whole passage in context, God certainly does call the man to also respect his wife, so a marriage should be full of mutual respect, “. . . submitting to one another out of reverence for Christ” (Ephesians 5:21).

While mutual respect is required, this should not take away from the fact that a man craves respect in a deeper way than a woman craves respect. Obviously all women want and need to be respected, but a man’s relationship to respect is different than a woman’s relationship to respect. It’s a deeper craving. Both will be hurt when disrespected, but if you disrespect a man it cuts even deeper.

God designed men this way and thus a man deeply desires a woman who respects him.

3. If You Want a Christian Husband One Day, You Must Learn that God Designed a Christian Man to Desire a Woman Who Encourages Him to Act Like a Man

There are those in modern day culture who desire to blend the sexes into one big conglomerate. But this always fails because according to Genesis 1:27 God made humans in two distinct ways – male and female. Whenever humans try to blend maleness and femaleness, they never create an equal shared role. All they do is force women to act more like men or they force men to act more like women.

God designed men and women the way they are on purpose. In sin many things go wrong, but when a Christian man and woman are walking in the Spirit and embracing God’s design, they are both happy about being a man or being a woman. They don’t want to change the other person and they don’t wish they were more manly or womanly. Rather, they want to rediscover their biblical differences and embrace God’s beautiful design.

While modern culture may want to live in this confusing grey area when it comes to gender, a Christian man does not want this. He wants a woman who not only accepts that he is a man who his very different than a woman, he also wants to be with a woman who encourages him to be the man God created him to be. He wants a woman who wants her man to act like a man.

4. God Designed a Christian Man to Desire a Woman Who Puts Christ First in Her Life

I haven’t been talking about “all men” in this article. I’ve been specifically talking about Christian men and what they desire in a woman. While a Christian man wants to be with a woman he finds attractive and who he connects with socially, what he cares most about is her walk with God. For as Proverbs 31:30-31 states:

Charm is deceitful, and beauty is vain, but a woman who fears the Lord is to be praised. Give her of the fruit of her hands, and let her works praise her in the gates.”