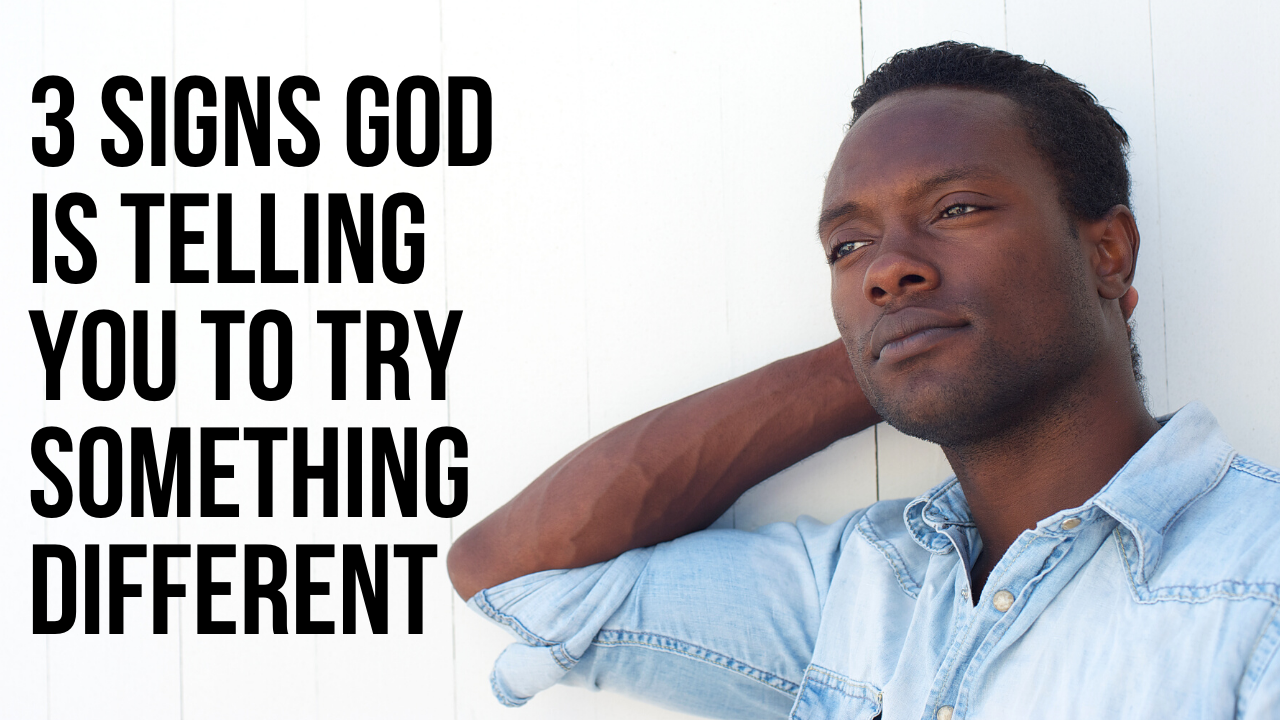 Here are 3 common signs God uses to tell you it’s time to try something different.

1. If You Keep Praying About the Same Thing and You Still Feel Like God Wants to Answer This Prayer with a Yes But Nothing Is Happening, This Could Mean God Is Telling You to Try Something Different

One of the reasons it’s so hard to know what God wants you to do is because oftentimes there are many good options that God could possibly want you to take. When it comes to choosing sin or choosing not to sin, it’s then extremely easy to know what God is saying. Whenever there is a clear command in the Bible about what God does or does not want us to do, then we don’t even need to ask God what he wants us to do because he has already told us plainly in the Scriptures.

But it’s when we get faced with those morally neutral things in life where it’s really easy to get confused. For example, if you want to be in a relationship and you keep praying about this, morally God could tell you yes, no, or wait (click here to watch my video playlist: How to Know If God Saying Yes, No, or Wait). Any one of these options could be God’s will. But what happens when you keep praying about something and in your heart you sense God wants to answer it with a “yes” but for some reason it’s just not happening?

In these instances I believe God is often telling you to try something different. He may be saying to keep praying and asking for this blessing you seek, to keep having an open heart to this unmet desire, but to also change the actions you’ve been taking to try to get different results. While God is the giver of all good gifts, he often provides those gifts to us through the actions and decisions we make in life. Notice how these principles played out in the life of David. In 2 Samuel 5:19-20 it states:

And David inquired of the Lord, ‘Shall I go up against the Philistines? Will you give them into my hand?’ And the Lord said to David, ‘Go up, for I will certainly give the Philistines into your hand.’ And David came to Baal-perazim, and David defeated them there. And he said, ‘The Lord has broken through my enemies before me like a breaking flood.’”

And the Philistines came up yet again and spread out in the Valley of Rephaim. And when David inquired of the Lord, he said, ‘You shall not go up; go around to their rear, and come against them opposite the balsam trees. And when you hear the sound of marching in the tops of the balsam trees, then rouse yourself, for then the Lord has gone out before you to strike down the army of the Philistines.’ And David did as the Lord commanded him, and struck down the Philistines from Geba to Gezer.”

It would have been so easy for David to assume he now knew the formula for victory. But instead of just assuming he should follow the same plan as last time, he went to God again and was open to trying something different if that’s what God wanted.

We must be careful we don’t fall in love with a certain path rather than truly following God. At times he may lead you to victory down a new path that you have never taken before.

2. If You Were Following a Wise Plan that Was Good for a Certain Season But Now That Season Has Passed, This Often Means God Wants You to Try Something New

As we just discussed in point 1, there do come seasons in life where God needs to change the plan. God can tell you take one path but later on it is very possible for him to tell you to try something different now. This doesn’t mean you heard God wrong at first. It could just mean it’s time for a change. But how can you be aware of when God is doing this?

One common reason God may tell you to try something different is when you are now in a different season of life. A great example of this is when it comes to dating and relationships. It is very common for God to tell a 20-year-old Christian single person one thing but then tell a 30 or 40-year-old Christian single person something very different. God may tell the younger Christian to just be patient and wait, but then perhaps once that person get’s older and God knows they are ready to be more proactive, he may then tell that same person to try online dating once they are older and in a new season of life. As Song of Solomon 2:10-13 states:

My beloved spoke and said to me, ‘Arise, my darling, my beautiful one, come with me. For behold, the winter is past; the rain is over and gone. The flowers appear on the earth, the time of singing has come, and the voice of the turtledove is heard in our land. The fig tree ripens its figs, and the vines are in blossom; they give forth fragrance. Arise, my love, my beautiful one, and come away.’”

Notice that “the winter is past; the rain is over and gone.” Likewise, when seasons change, God may call you to try something different.

3. If Trying Something New Would Be the Wisest Path Forward, Oftentimes the Lord Is Telling You to Try Something New

I get lots of emails of people sharing their stories with me and then end with something like, “But after all this, I still don’t know what God wants me to do? He just seems silent about this?”

I do believe God speaks to us and oftentimes he will literally communicate to us, “No, don’t go that way. Do this instead.” But oftentimes he doesn’t communicate so clearly about a certain topic we want a specific action plan for. When a decision needs to be made but you are unsure of what God is telling you to do, it’s in these instances where I believe God is calling you to use wisdom.

Many times we get fixated on receiving revelations from God about what he wants us to do. But throughout the Bible we are also called to live wisely. For in Ephesians 1:17 it states, “I keep asking that the God of our Lord Jesus Christ, the glorious Father, may give you the Spirit of wisdom and revelation, so that you may know him better.”

Following the Spirit does mean you listen to hear what he is saying, but it also means that you choose to live wisely. When you are not getting a revelation about what God wants you to do, I believe this means God is calling you to make the wisest choice that will most likely result in the best outcome.

So listen for God’s direct revelation to the questions you have. But if you don’t sense anything specific from the Lord and if you have been pursuing something good but you have not changed your approach in a while, the wise thing to do would be to keep pursuing that good thing but to also try something different in how you are pursuing it.