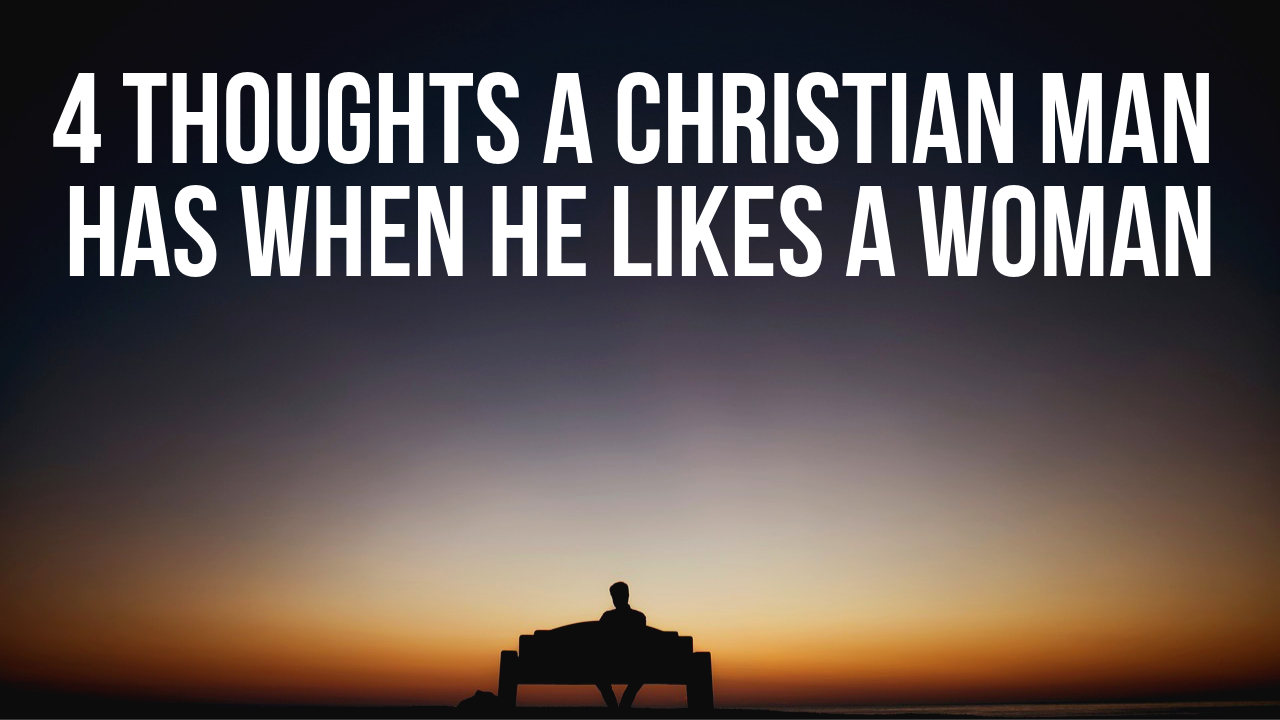 Here are 4 thoughts, in no particular order, that go through the mind of a Christian man who has feelings for a woman.

Christian men are supposed to be the initiators, the pursuers, and the leaders in the relationship. But even men who are ready to fulfill their biblical roles as men still have this basic thought run through the head, “I wonder if she likes me too?”

While I believe a man should risk getting rejected if he really does like a woman, I also don’t think it is unreasonable for him to first assess the likelihood of finding success. There’s no point to make things awkward if he really has no chance with her.

With all that said, it is important for women to know that men have this thought of “Does she like me too?” because most men will not pursue without some sort of evidence that it could possibly go well. If there is not one shred of evidence that she might be interested in him too, he will most likely not pursue her. I’m not saying she should spell it out for him, but for a woman to ignore a guy but then expect him to pursue her anyways is putting unfair demands on him.

Also, many men will want to pursue a woman but often times they do not want to come off like a creep so they will at least wait for a sliver of hope before trying to ask her out.

Thought #2: “How Can I Avoid Screwing This Up?”

At some point a man will eventually begin to strategize on how to best accomplish his goal of dating the woman that he likes. But usually his thought process will not come from the angle of success but often he will try to make a strategy based on minimizing his failures.

I’m not saying this is right but the thing that the majority of men fear the most is failure. Many times the reason men don’t try something at all is because they would rather sit out rather than try and fail.

This is one of the factors that contributes to the awkwardness and nervous energy so many men have around the women they like. Their minds get so consumed with trying to not fail or look stupid in front of her that he actually ends up doing this very thing anyways.

If you are man who is reading this, my advice is to first accept the possibility of things not going well. When you are willing to try even though you know you might fail, you will be far more at peace when trying. If you just constantly try to think of ways to avoid failure because you can’t bear the possibility of doing something wrong, usually you will get stuck in your head or get so nervous it will not go well when you do actually try to pursue her.

If you are a woman who is reading this and you sense a guy that you like is maybe struggling with this fear of screwing up, the best thing you can do is give him time to relax when he is around you and make sure you encourage his efforts when he does pursue you. The more time you spend together the more he will get comfortable with you.

Most men will fear waiting too long but they will also fear acting too soon. It’s rare that a man and woman’s internal clock about the timing of when the relationship should move forward is the same.

One of the variables that will factor into when he will make a move is his views on dating or courting. If he takes the courting view he will most likely try to have a prolonged season of friendship before courting. If he holds a dating view, he will probably try to transition much faster from friendship to a dating couple.

As a general tip, both men and women should have grace in this area and allow things to move slightly faster or slower than anticipated. Nothing goes as expected in real life, including the timing of a relationship. If you do start dating a little too soon or a little too late, it’s really not the end of the world. For as Romans 8:28 promises us, “And we know that for those who love God all things work together for good, for those who are called according to his purpose.”

If he truly is a Christian man, at some point he should have the thought, “What is God saying about this relationship?” A man who is walking in the Spirit will want to submit to God’s will for his life.

However, one red flag to look out for is when a man over emphasize the voice of God in his head and underemphasize what God is saying through the Bible and life circumstances. It’s dangerous when men start living by what they hear in their head in an extreme and legalistic way.

I have talked to far too many men who feel like they heard God say something like, “This is your future wife” but then reality does not reflect that thought at all. Rather than make the obvious conclusion that they probably misheard God or made that voice up in their head, some guys cling to that voice no matter what. She can be off and married to another man but some guys still cling to what they heard. This is not healthy.

A Christian man will certainly seek the Lord’s voice and try to obey what God is saying to them personally. But an immature Christian man will value his own ability to hear God’s voice more than what the pages of Scripture clearly state in black and white. A man who refuses to live by biblical wisdom and who will only submit to the voice in his head often causes a lot of unnecessary damage to himself and others.

Nonetheless, godly men do inquire of the Lord. They do seek to hear the personal voice of the Holy Spirit directly to them when they have questions about a woman they like, but they do so under submission to the Scriptures. And not only that, they keep inquiring of the Lord to confirm what God wants them to do or not do each step of the way as they pursue a woman they are interested in.