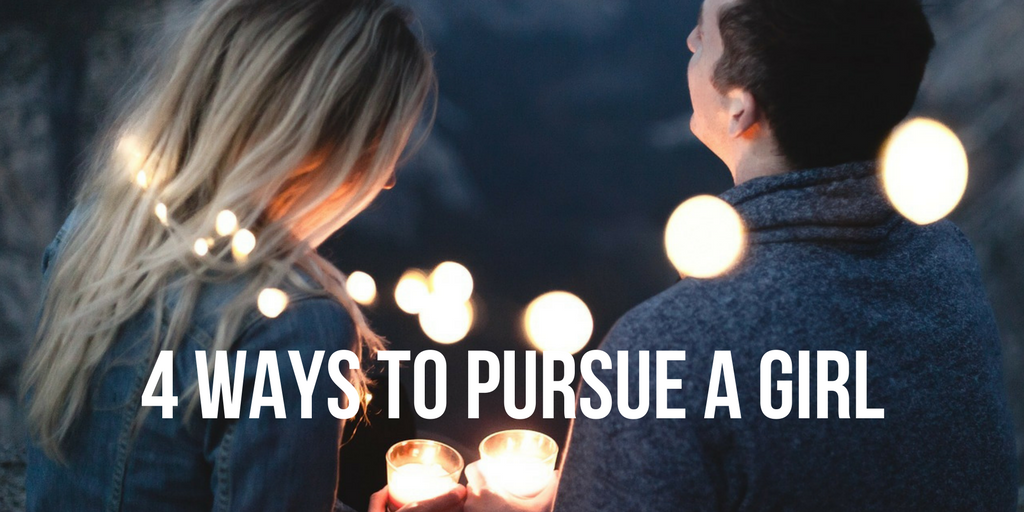 So, you meet a great Christian girl that you really like, you want to pursue her, but you don’t know how. What should you do? What if you come on too strong or too weak? What does “pursue” even mean anyway?

In this article I’m going to give some pointers to Christian guys on how to pursue a Christian girl.

I recently talked about when it is a good idea for a Christian girl to pursue a guy. My main point in that article/video was that there is nothing wrong with a girl pursuing a guy as this does not mean the woman will need to lead in the marriage one day. The Bible nowhere says that a woman can’t make the first move. It simply talks about the roles of husbands and wives in marriage (Ephesians 5:22-33).

With that said, husbands are called to lead their families, therefore it makes perfect sense for a man to pursue a woman before marriage. While there is nothing wrong with a woman making the first move and “pursuing” a guy, a Christian man should then get the picture and lead. This woman pursuing man scenario should be the exception and not the norm.

Therefore if you want to be with a woman you like, you should see it as your obligation, not hers, to get the ball rolling between the two of you. If you expect her to make the first move then you will probably be waiting a long time and miss your opportunity.

Additionally, don’t be that guy who will only risk pursuing a girl after she makes it painfully obvious you should pursue her. That’s no risk at all. A woman will find you much more attractive and see you as a great potential Christian husband if you pursue her when it truly is a risk to yourself.

If you are vulnerable, willing to risk rejection, and you show her that you like her before she shows you that she likes you, this says a lot. It will be easier for her to build a relationship with you if you pursue her and take a risk on revealing your feelings towards her.

I think one of the most common mistakes I see Christian guys make towards girls they like is that they build up in their minds the potential relationship with this girl and then when they share their feelings it can be overwhelming for the girl. Even if you really, really, really like a girl, you don’t want to share too much of your heart with her too soon.

I think the one exception to this is if the two of you have been good friends for a decent amount of time. If you know each other well and you want to transition from friendship to dating, then I think it makes more sense to share more.

The danger with over expressing how much you like a girl is that you might put too much pressure on her to like you that much right away. Most people want consistency in the relationship, meaning they want the other person to like them equivalently. If the other person doesn’t like them as much or likes them too much, it usually makes things weird. So if even if you like a girl A LOT, let her know that you like her, but don’t scare her off with too much information.

It might be stereotypical to say this, but woman generally care more about relationships with people than men do. Guys need people too, but woman typically have a greater need for community and socializing.

When you pursue a girl, you will really show her that you care if you show her how much you care about the people she cares about. If you go the extra mile to connect with her friends and family, this will make a great impression on her.

Also, it is respectful and wise to reach out to her parents and other mentors in her life. You may want to sit down with her dad or pastor if she has a good relationship with them. You might want to “ask permission” so to speak if she still lives under her parents roof and rules. If she is older and out on her own, I don’t think you need to ask but it is still a good idea to introduce yourself and let them know who you are and what your intentions are as you pursue this girl they deeply care about.

Not everyone holds to the same beliefs that I do regarding dating. I respect that. The Bible doesn’t directly talk about dating so I’m not here to add extra rules that are not in the word of God. I simply believe that the most biblical approach to dating is to use it as a specific season meant to test if a man and woman want to become a husband and a wife together.

Not having sexual experiences out of the marriage covenant (1 Corinthians 7:9), refusing to marry a non-believer (1 Corinthians 7:39), and not being spiritually unequally yoked (2 Corinthians 6:14) are direct commands in Scripture. While none of these Bible verses mention dating, they clearly must guide the way you date. Therefore I believe dating to figure out if two people should get married is the best way to not fall to temptation.

Likewise, as soon as you know the two of you should not get married, the dating relationship should end. Dating someone you know you will not marry opens you up to all kinds of unnecessary temptations.

With all that said, you should pursue a Christian girl by letting her know your intentions for dating. Let her know you are not playing games. Again, don’t say you want to marry her because this will scare her off if you say that too soon. Rather, let her know your views on the purpose for dating. While you don’t want to get too serious too fast, you also want her to know you are a man looking for a wife, not a boy looking for a long-term girlfriend.  If she just wants to date and not think about marriage, it’s better you learn this now.

How to Pursue a Christian Girl

In summary, to pursue a Christian girl, seek to serve her and honor her. Treat her like God’s daughter, because she is! Pursue her, don’t put too much pressure on her too soon, show you care about her by caring about her friends and family, and be intentional in your dating approach.