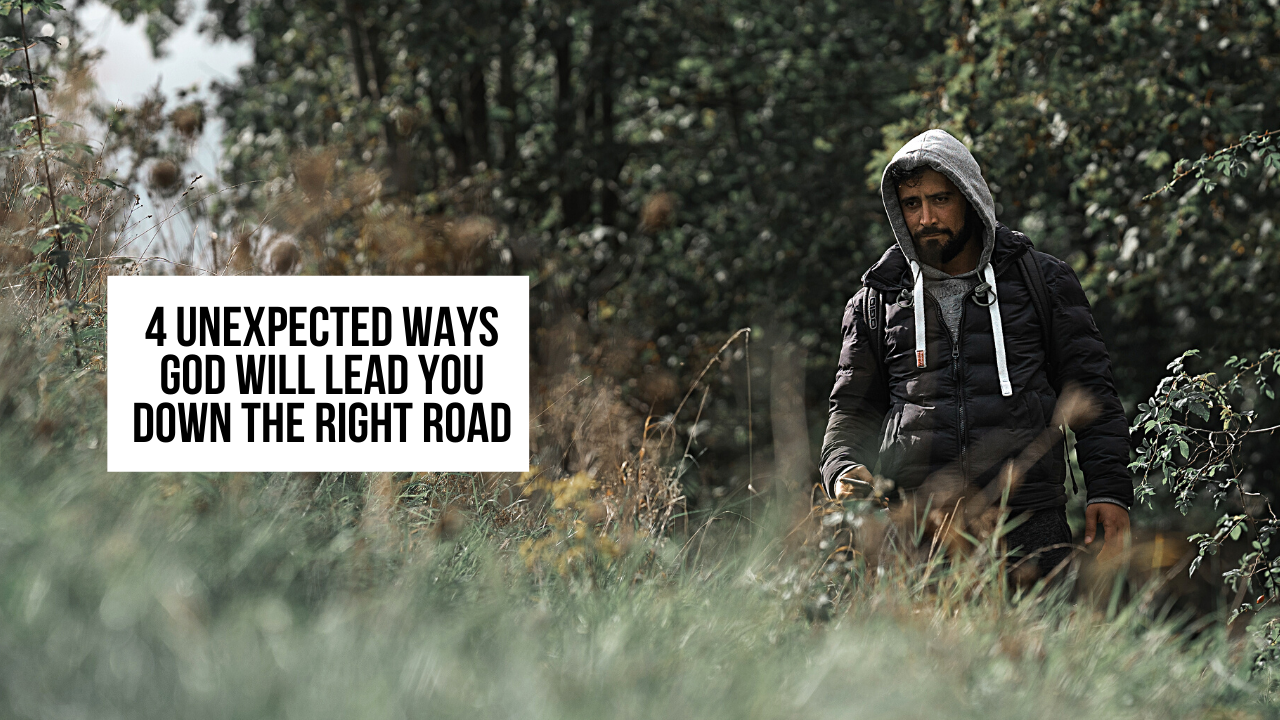 Here are 4 unexpected ways God will often lead you down the right road he wants you on.

1. God Will Often Let You Get Lost So You Will Then Seek His Directions More Diligently

While God is absolutely sovereign and always has the final say about what does or does not happen in this world, it’s also clear that God has bestowed on humans personal responsibility and freedom to make good or bad choices.

While God could micromanage our lives and stop us from ever taking a wrong turn, what he chooses to do is work through our free choices. In other words, God is so sovereign that he can get you where you need to be even when you make wrong turns. Sometimes God even uses those wrong turns to eventually lead you to where he wanted you before you made that wrong turn.

This can be seen in the parable of the prodigal son found in Luke 15:11-32. In verses 11-13, the son asks for his inheritance early so he could go his own way and leave the father. In a surprise move, the father grants the son’s request and actually lets him go. The father knew the son would be better off with him, but he also knew the son needed to learn this for himself. He purposely let the son get lost so that he might truly be found one day.

When the son returns, the father orders his servants to throw a party. He said, “For this my son was dead, and is alive again; he was lost, and is found” (Luke 15:24). Likewise, when we are lost in our hearts but we don’t know it yet, God will actually let us get lost in life. He will let us make terrible choices that finally cause us to return to him so that we can then be redeemed in our hearts too.

So God will often let you get lost so you will then return to him and seek him diligently, which is where God will then lead you on the right road he has for you.

2. God Will Often Use What You Learned from Your Sinful Lifestyle to Equip You for His Purpose for You

God wastes nothing. God will never cause you to sin (James 1:13-14) but in his sovereignty he can even use our sinful choices for good. One way he does this is by helping us to use our knowledge gained in sin to then help other sinners like us who are dealing with the same things we dealt with.

It’s no accident that God chose Paul to be his mouthpiece to those who struggled with legalism. Before Paul turned to Christ, he was one of the most legalistic persons there was. In Philippians 3:4-9 (NIV), he said:

If someone else thinks they have reasons to put confidence in the flesh, I have more: circumcised on the eighth day, of the people of Israel, of the tribe of Benjamin, a Hebrew of Hebrews; in regard to the law, a Pharisee; as for zeal, persecuting the church; as for righteousness based on the law, faultless.

But whatever were gains to me I now consider loss for the sake of Christ. What is more, I consider everything a loss because of the surpassing worth of knowing Christ Jesus my Lord, for whose sake I have lost all things. I consider them garbage, that I may gain Christ and be found in him, not having a righteousness of my own that comes from the law, but that which is through faith in Christ—the righteousness that comes from God on the basis of faith.”

Paul was used by God to help people who struggled with the same things he used to struggle with. Likewise, God will often lead you down the right roads he wants you on by taking what you learned in your seasons of rebellion and using that knowledge to enable you to do good for his glory.

3. God Will Lead You Down the Right Road By Teaching You to Not Follow the Crowd

In our humanness we often feel there is “safety in numbers.” When our defense mechanisms kick in, our default position is to follow the herd. We think that if many people are doing something or thinking a certain way, then this must be the right path. Everyone is looking for “social proof,” which is a term that means that people will feel more comfortable taking an action once they see many other people taking that same action.

But from a biblical perspective, the opposite should be true for Christians. If we find ourselves going down the same roads in life that the masses are going down, God tells us this should be a red flag to us. Something is wrong if we are following the crowds in this world. For in Matthew 7:13-14, Jesus said:

God will lead you down the right road by showing you what most people are doing and then telling you to do the opposite.

Be open to God leading you down paths you did not expect. When you are truly willing to follow Christ anywhere he leads, you will be surprised by how different your life will turn out than the way you thought it would. But it will also be so much better than you thought it would be too! As Ephesians 3:20-21 states:

Now to him who is able to do far more abundantly than all that we ask or think, according to the power at work within us, to him be glory in the church and in Christ Jesus throughout all generations, forever and ever. Amen.”