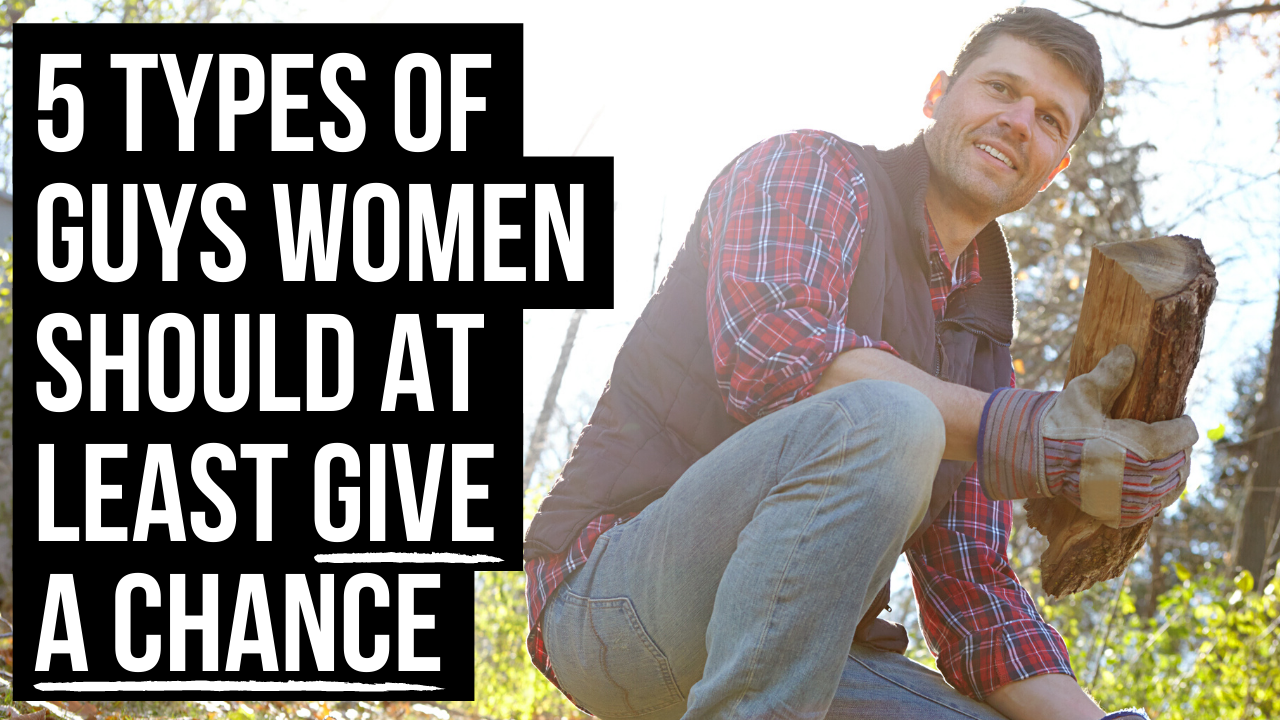 With that said, sometimes there are great options right in front of you that you can’t see because of your perception. Sometimes the problem is not with your options but with your view of the options.

Certainly you can’t force a relationship to work just because it makes sense on paper. But here are 5 types of guys that sometimes get overlooked that often deserve to at least be given a chance if you are a Christian woman looking for a godly man.

1. The “Good Friend Who Likes You” Guy

When you read what the Bible says about true friends, it’s hard not to see the obvious benefit of turning a friendship into something more. Oftentimes the qualities of a good friend are the same qualities that will sustain long-term romance. As Proverbs 18:24 states, “A man of many companions may come to ruin, but there is a friend who sticks closer than a brother.” Wouldn’t you want your husband to be like this “friend who sticks closer than a brother”?

Not every guy friend will make a great boyfriend. There truly are people in the world who make great friends but who would make a terrible couple. With that said, if you have a great guy friend, you have to admit that there is something about this guy that you enjoy or else you would not be such good friends. Again, that’s not always enough to mean that you should date them. But if you have a good guy friend that you know likes you as more than a friend, oftentimes the wisest approach is to at least give this guy a chance.

I say that for a few reasons. First off, if you know a guy friend likes you as more than a friend, it’s not kind to pretend like you don’t know this. Once you start dating someone else, you are going to lose that friendship with this guy anyways and oftentimes his feelings will be even more hurt because he will be interpreting your friendship as though he had a chance with you. Or he will start dating someone else and you two won’t be as close friends then either.

Since this guy friend who likes you is not going to be your long-term close friend anyways, and since there is clearly something you like about him which is why you two make such good friends, I believe it is often worth giving this type of guy a chance even if you don’t think you could ever like him as more than a friend. Sometimes you just need to give him a chance and he might surprise you. As Dr. Cloud and Dr. Townsend wrote in their book called Boundaries in Dating:

Romance is great. Sexuality is great. Attraction is great. But here is the key: If all of those are not built upon lasting friendship and respect for the person’s character, something is wrong. A real and lasting relationship must be built on friendship first.”

Many women complain about there basically being two types of guys in this world. There are those guys with high character but who are not attractive or desirable in a romantic way. And then there are those guys who the woman finds really attractive and desirable in a romantic way but this man lacks character and the godly qualities needed for marriage.

Attraction is important. I’m not saying that you should force yourself to date someone that makes you feel like you have the stomach flu every time you think of having to kiss him. But I will say that character is way more important than attraction and instant chemistry. Trust me, when you have kids crying all over the house, dirty dishes piled to the ceiling in the sink, and a stack of bills on the table, you are going to be very happy you chose the high character guy over the attractive guy. Take the dad-bod over rad-bod all day if one man has character and the other doesn’t!

Avoid being nearsighted. Think about how your attraction will change over the years for good or bad. Remember, you are not looking for a boyfriend. You are looking for a husband to spend the rest of your life with. And those are two very different things. Again, going back the book called Boundaries in Dating, Dr. Cloud and Dr. Townsend said:

I’m the first to admit that the story of Jacob, Leah, and Rachel certainly is disturbing and a great example of what not to do in relationships. God never condoned their polygamy. Rather, by grace he chose to use this sinful family to create his chosen people.

With that said, in my opinion, there is something romantic about Jacob’s persistence for Rachel. Genesis 29:20 (NIV) states, “So Jacob served seven years to get Rachel, but they seemed like only a few days to him because of his love for her.” Even when Laban tricked him, the man was determined to get the woman he loved (Genesis 29:30).

Most guys are unable to find the balance between being respectfully persistent once rejected compared to turning into a creepy stalker who just can’t accept no for an answer.

Some women are like an insurance company when you try to submit a claim to them. They just have a policy that no matter what the details are, their first answer will always be a rejection. Only those people who resubmit their claim actually have a chance of their claim getting covered. Some women have been so hurt in the past that they always reject any guy no matter what. Their default answer is, “No,” because they are so afraid of love.

These types of women are actually sometimes waiting for the guy who pursues her so hard that he is undeterred by her initial rejection. Now, if a guy tries a second time and she still rejects him, I do think he should completely stop and in most cases he should just accept her first no. I’m not saying every guy should always try again. Again, most guys who try again come off as creepy and pushy.

But if you are that type of woman who literally says no to everyone because you are super cautious, I encourage you to at least give the respectfully persistent guy a chance. His self-confidence in not taking your first rejection so personally that he then dislikes you says a lot about him. If he’s willing to get rejected again, that probably means he’s serious about you and not playing games like the rest of those guys you have been hurt by in the past.

If you really don’t like someone even if they are respectfully persistent, don’t force it. I’m not saying you should make yourself date someone you don’t like. But sometimes it can’t hurt to at least give a guy like this a chance.

4. The “Caring but Uncharismatic” Guy

I have a little gripe to share with my Christian sisters. I say this in a lighthearted manner so please don’t take this personally or too seriously, but I also think there is some real truth in what I am about to say which can really help some of you ladies out there looking for a godly husband.

A real woman has a beautiful body and will be alluring to her husband in a sexual way, but if he thinks they going to be acting out porn scenes all over their house he is going to be really disappointed in marriage one day. Likewise, a real man can express his love for a woman and his wife can really feel understood by him. But if you as a woman are waiting for Jerry Maguire to come walking through that door, saying “You complete me” as all your friends sit there watching with their jaws wide open, you are going to be really disappointed in life when it comes to romance.

There are charismatic, romantic guys out there. But I’m telling you, there are way more good guys who lack the ability to articulate themselves well but who are still really caring and loving men. So if you feel compelled to wait for prince charming to come galloping in on a white horse, I’m not here to say you are wrong for doing that.

I’m just saying you might be happier and find your husband sooner if you gave the caring guy who lacks lots of charisma a chance.

5. The “Responsible but Unimpressive” Guy

Our social media crazed culture is always highlighting the “impressive” people out there. Everyone is always posting something “special.” The perfect cup of coffee, the best vacation spot ever, or the coolest C.S. Lewis quote around.

Sadly, however, behind the phones lie undeveloped people who are delaying adulthood. Women struggle here too but as a man I am especially sensitive to the lack of responsibility most guys are willing to take on these days. Many guys email who are in their early 20s and tell me how they want to be married but they know they are too young.

I think it’s sad that our culture has taught grown men in their 20s to believe that they are too young to be married. I agree that most people in their early 20s are too immature now days to get married. But I certainly don’t think it is impossible for someone in their early 20s to be responsible enough for marriage. Marriage is really not that complicated. It’s hard, but it’s not complicated. You don’t need to know that much for it to work. You just need to have a lot of character, spiritual maturity, and a willingness to be responsible. Sadly, these are the exact types of things culture now days tells men to avoid, especially young men.

Freedom is not the absence of responsibility. Freedom is the ability to do what you want. A man who is free in Christ will want to take on the responsibility of caring for others.

Look for the man who is obeying 1 Corinthians 16:13-14, “Be watchful, stand firm in the faith, act like men, be strong. Let all that you do be done in love.”