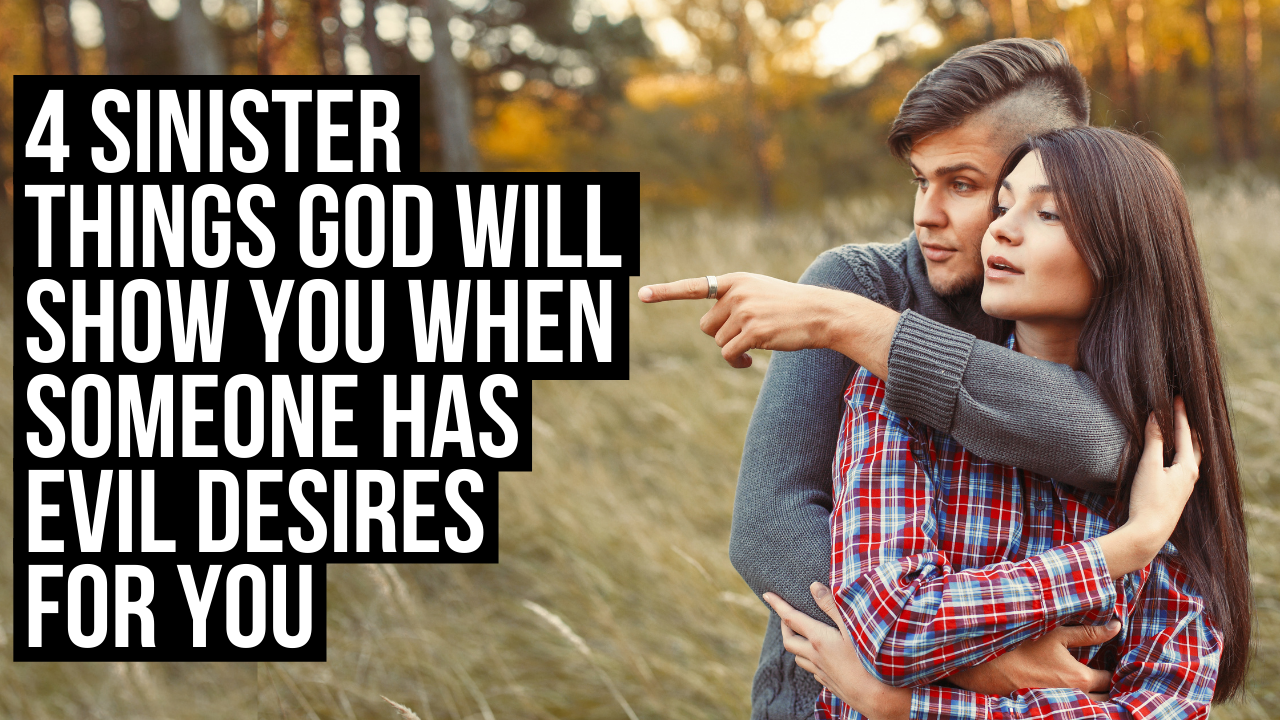 Here are 4 sinister things God will show you about someone who has evil desires for you.

1. God Will Warn You About Someone with Sinister Intent By Letting You See How Heartless They Are Towards Those Who Have Treated Them Well

Every one of us has the potential to hurt those people that we love. None of us are perfect in our relationships with each other. So when I use this phrase “sinister,” I’m really talking about those types of people who have an especially evil agenda for you.

People who are truly dangerous to be in a relationship with are often marked by their cruelty towards people who have treated them well. It’s not uncommon for enemies to dislike each other. God certainly calls us to love our enemies and pray for those who persecute us (Matthew 5:43-48), but it’s not an especially sinister desire to wish harm on someone who has caused you harm. From a worldly perspective that is normal. Again, God calls us to a higher standard of love than this. But being mean back to people who have been mean to you at least makes rational sense.

But people who are especially corrupt take it a step further and are actually cruel to those who treat them well. King Saul trying to kill David would be a good example of this. It makes sense of why the Philistines would want to kill David since David was their enemy. But David was actually very good to King Saul. When David spared his life, in 1 Samuel 24:17, Saul said to David, “You are more righteous than I, for you have repaid me good, whereas I have repaid you evil.”

So if God is showing you that someone is being heartless towards others who have treated this person well, this is a warning sign to you. Even if you treat this person well, eventually they will turn on you because of the evil in their heart.

2. If God Shows You That Someone Is Willing to Sacrifice Someone’s Well-Being for Their Own Well-Being, This Is a Sign God Is Warning You that This Person Has an Evil Desire for You

At an especially dark point in David’s life, notice how evil he acted towards Uriah. David slept with Uriah’s wife, Bathsheba, and now she was pregnant. David tried to trick Uriah into coming home from war to sleep with his wife so it would look like the baby was Uriah’s, but it didn’t work. He tried again by getting Uriah drunk, but still he refused. Finally, when David realized he could not cover up his sins by making it seem like this would be Uriah’s baby, he just had him killed.

But what makes this especially sinister, as though it was not bad enough already, was this little detail found in 2 Samuel 11:14-15. It states, “In the morning David wrote a letter to Joab and sent it by the hand of Uriah. In the letter he wrote, ‘Set Uriah in the forefront of the hardest fighting, and then draw back from him, that he may be struck down, and die.’”

David trusted Uriah’s character so much that he knew he would not tamper with the very letter that ordered Uriah’s death. Not only did he sleep with this man’s wife and impregnate her, he also had him killed and made him carry the letter himself.

David repented and was not sinister forever, but if God is showing you someone who will do anything to get what they want no matter who gets hurt, this is a sign God is warning you about a sinister person who has evil desires for you.

3. If God Has Shown You Evidence That This Person Lives to Do Evil, This Is a Sign God Is Warning You About Their Evil Desires for You

I agree that there are layers to people and that someone can do good in one area of their life while doing evil in another part of their life. But sin is progressive, meaning that it always gets worse and worse. The doctrine of “total depravity” is not saying that all people are as bad as they possibly could be. Rather, this doctrine points to the fact that every part of a human being is corrupted by sin. They are totally depraved not in depth but in breadth, meaning that they can always become eviler but every part of a non-Christian is evil because they are without Christ. As Paul said in Romans 6:19, which says:

My point is people who reject Christ are on the path of evil, and once they walk far enough down that path everything in their life will be consumed by their evil desires. If you are in this person’s life, they may treat you well now but eventually their evil desires will win out and they will use you for evil too because the evil in their life will be all consuming.

God’s grace can save anyone. But people who refuse God’s grace don’t get better with time. They get worse. When fully given over to sin, people not only indulge in sin, they become completely sinister and actually live for sin. As Proverbs 4:16-19 explains:

For they cannot sleep unless they have done wrong; they are robbed of sleep unless they have made someone stumble. For they eat the bread of wickedness and drink the wine of violence. But the path of the righteous is like the light of dawn, which shines brighter and brighter until full day. The way of the wicked is like deep darkness; they do not know over what they stumble.”

If God is showing you someone who has revolved their whole existence around sinning more and more every day, you can be sure God is warning you that eventually this person will attack you too once it suits their needs.

4. If Someone Is Willing to Blaspheme God, This Is a Sign They Will Be Willing to Betray and Hurt You

We live in a day and age where the fear of God is very low. Even among Christians, people are quick to speak to God like he is just their buddy rather than the eternal Ruler of all. Yes, God wants to be our friend, but he is still a holy God and will always be much more than just a friend. Therefore, since he is holy and true, there is such a thing as blasphemy.

There’s been much debate about the meaning of these verses, and this is not the type of article to unpack all the different views. But I would hope we can all at least agree on one simple fact that shines very clearly through Jesus’s words: blasphemy is extremely dangerous. It seems there are different levels to blasphemy, but I for one just want to stay away from it all.

Therefore, if someone is so callous towards God that they are willing to play with fire by blaspheming him in any way, it shouldn’t be a surprise when this person also does something extremely evil towards you too. If someone is openly and verbally hateful towards God, this is a warning to you that this person will harm you too if you stick around long enough.