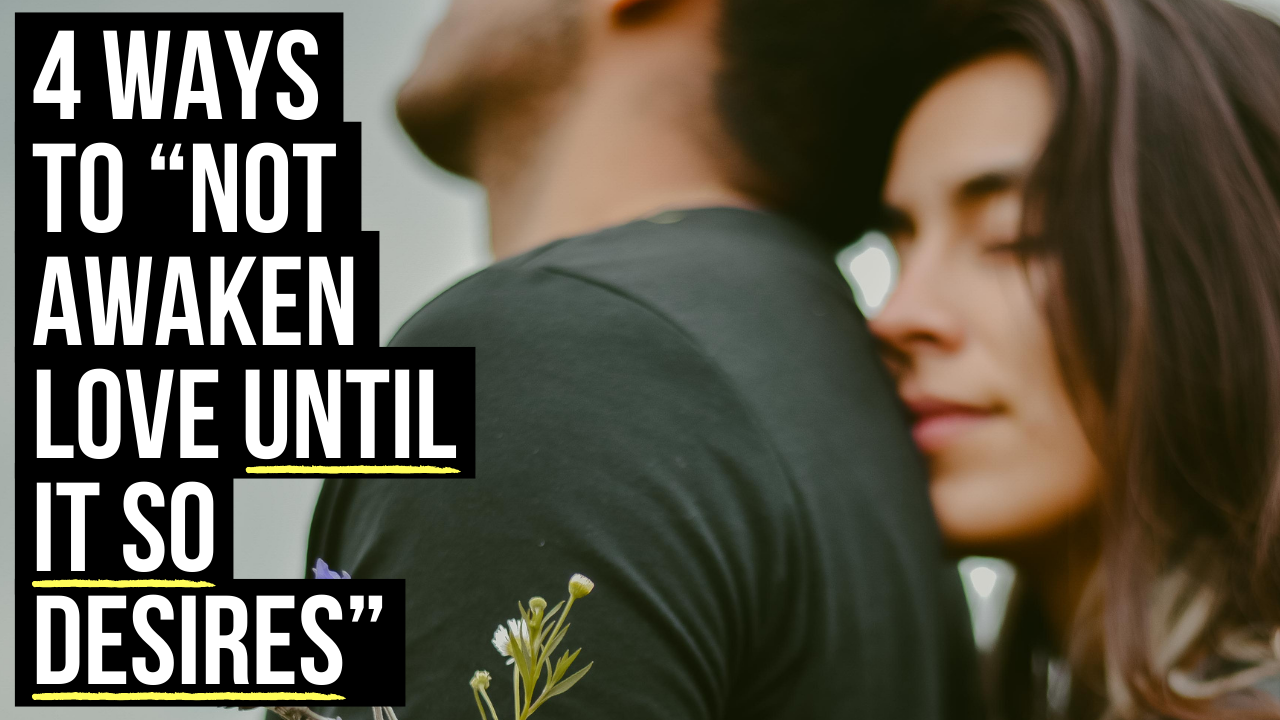 What does the Bible say about “not awakening love until it so desires?” How can you remain patient and “not stir up love until it pleases?” And how can you use your waiting season in singleness wisely?

1. Love Is Free, Not Forced

Song of Solomon 2:7 states, “I adjure you, O daughters of Jerusalem, by the gazelles or the does of the field, that you not stir up or awaken love until it pleases.” Romantic love is like a delicious piece of fruit that we desperately want to eat. But like a piece of fruit, it won’t taste good until it is ripe. If you take it too soon or you take it too late, you will miss the pleasure and nutrients it was meant to give.

Likewise, God designed healthy romantic love to have a ripening process that cannot be forced. While I’m not saying you should throw caution to the wind, turn your brain off, and just give into carnal pleasures, I am saying that this charge in Song of Solomon to not arouse or awaken love until it so desires is saying that love must be free to develop in its own timing.

Perhaps this is why the man says in Song of Solomon 2:2, “As a lily among brambles, so is my love among the young women,” and the woman says in Song of Solomon 2:3, “As an apple tree among the trees of the forest, so is my beloved among the young men.” You can’t force a flower to bloom nor can you force an apple to be ripe. Rather, you must give it what it needs to thrive and let it grow in its own timing.

I think this is also what is meant by the phrase “by the gazelles or the does of the field” that comes before the charge “that you not stir up or awaken love until it pleases.” The gazelle is probably a reference to the man and the doe is probably a reference to the woman, since a doe is a female. You can’t tame a wild gazelle or a doe. They go where they want to go and show up when they want to show up.

In Song of Solomon 2:8-9, the woman says, “The voice of my beloved! Behold, he comes, leaping over the mountains, bounding over the hills. My beloved is like a gazelle or a young stag.” He’s free. He’s present. He’s there because he wants to be there.

So if you want to obey the command to not awaken love until it so desires, remember that love is free and not forced.

2. Love Is Responsible, Not Reckless

The danger in emphasizing the freedom in biblical romantic love is that we might allow our sinful flesh to take over and mistake this for allowing love to be free. This is not what this verse is saying.

Before Song of Solomon 2:7, the woman says in Song of Solomon 2:5, “Sustain me with raisins; refresh me with apples, for I am sick with love.” Here we can see that a love that is awakened on time is able to sustain itself. Thus, a love that is awakened before it is ready is unable to sustain itself. It’s not ready to give life giving nutrients and pleasure like good fruit is meant to do.

Their love is ready because it is sustaining the needs it is creating. False love that is not ready creates needs it can’t fulfill in a responsible way.

After Song of Solomon 2:7, the man says to the woman in Song of Solomon 2:15, “Catch for us the foxes, the little foxes that ruin the vineyards, our vineyards that are in bloom.” Metaphorically, now the man is calling the woman to fulfill her needed role in the relationship. While he is out working and proving the food they need, she is called to take care of their vineyard while he is away. Just as the man could responsibly supply her with the love she needed, so too could this woman responsibly provide the man with the love he needed from her.

The point here is that when true romantic love is present rather than worldly love, the couple will be responsible and able to give what the other person needs. If they are not ready to fulfill their biblical relationship responsibilities (Ephesians 5:21-33), they are arousing love before the love is really ready.

3. Love Is Faithful, Not Fickle

The context of Song of Solomon 3:1-5 is not entirely clear, but it appears that this couple may be in a fight or at odds for some reason. In Song of Solomon 3:1-3, the woman states that she is lying in bed waiting for her man, but he is not there. And so she goes and searches for him. She asks everyone she sees where he might be. Song of Solomon 3:4 then states, “Scarcely had I passed them when I found him whom my soul loves. I held him, and would not let him go . . .”

I take this to mean that love will be ready when it can sustain you through the hard times that often come later in the relationship after the easy times in the beginning of the relationship have passed.

If you get deep into a relationship where love is not ready, the hard times will overtake you and split you up, causing much pain. In instances like this, it would have been better to not awaken these feelings for this person you are now separating from because the love was not there but you got attached anyways.

But when the love is there with someone and the love is ready, the hard things that usually split people up will not split you up.

4. Love Is First, Not Second to Anyone

By the time we get to Song of Solomon 8, this couple is married and passed the honeymoon phase. And now they are dealing with the issues that arise because of other responsibilities in life. Other people eventually always come into a couple’s life and create opportunities for issues to occur between the man and woman. This is probably why the woman said in Song of Solomon 8:1, “Oh that you were like a brother to me who nursed at my mother’s breasts! If I found you outside, I would kiss you, and none would despise me.”

But, since their love was mature and ready to handle these issues, they rose above the outside influences trying to split them up and their love still thrived. This is why in Song of Solomon 8:4 the woman repeats the phrase again, “I adjure you, O daughters of Jerusalem, that you not stir up or awaken love until it pleases.”

If you get married to someone and your love was not mature, the pressures that come from the outside world – like job pressures, family pressures, societal pressures – will hurt your relationship and cause harm. But if your love is ready, it will be able to get through these issues that come later in marriage.

When love is ready, the couple will have other responsibilities in life but they will still prioritize their marriage above all these other people and duties.