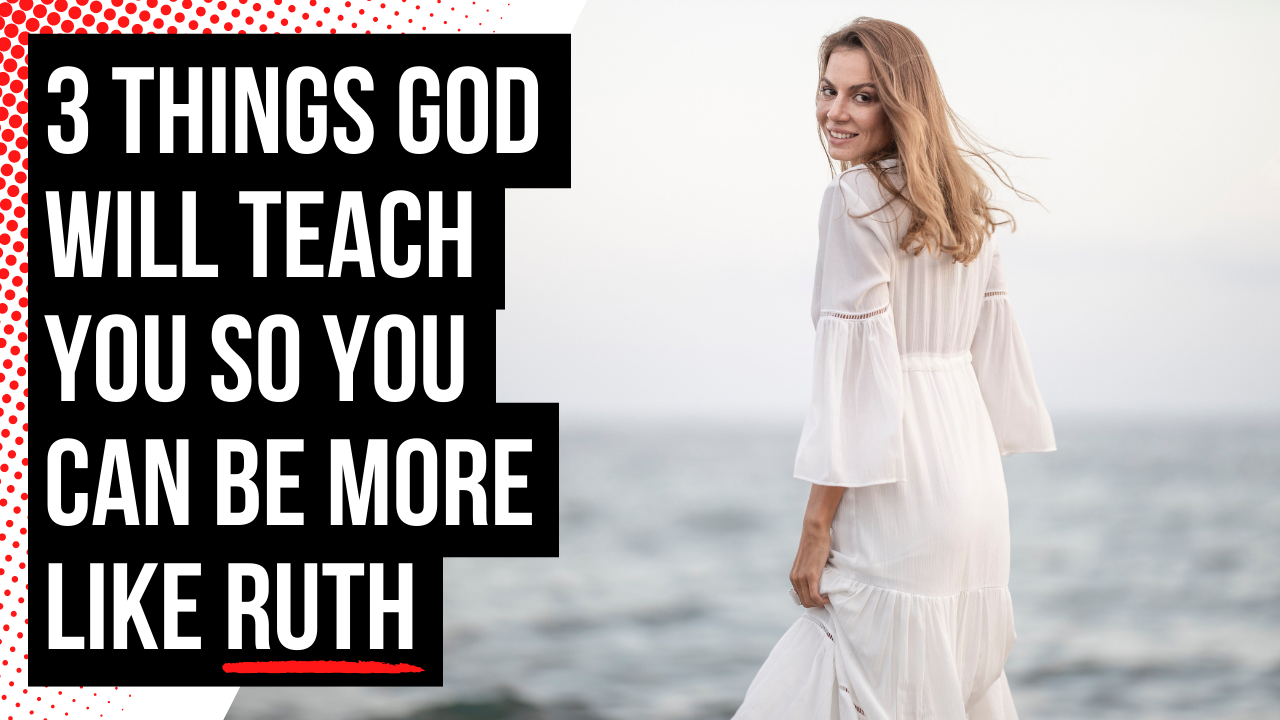 How can a Christian woman model herself after Ruth? Here are 3 things God will teach her.

(And if you want to read part 2 of this series about how a man can be more like Boaz, click here. )

1. Live Godly Before You Even Meet Your Future Husband

In Ruth 1, we see the faithfulness of Ruth before Boaz is even in the picture. When Naomi left Moab and went back to Bethlehem, she told Ruth to stay. But Ruth said:

Do not urge me to leave you or to return from following you. For where you go I will go, and where you lodge I will lodge. Your people shall be my people, and your God my God. Where you die I will die, and there will I be buried. May the Lord do so to me and more also if anything but death parts me from you.” (Ruth 1:16-17).

When we get to Ruth 2, her reputation preceded her. Before Boaz and her even spoke, Boaz knew she was a good woman:

But Boaz answered her, ‘All that you have done for your mother-in-law since the death of your husband has been fully told to me, and how you left your father and mother and your native land and came to a people that you did not know before. The Lord repay you for what you have done, and a full reward be given you by the Lord, the God of Israel, under whose wings you have come to take refuge!’” (Ruth 2:11-12)

If you want to be like Ruth, don’t wait to obey God until you meet your Boaz. Obey him now.

One of the worst things a woman can do if she wants to love a man is listen to modern women who hate men. Our culture is confused about gender roles, and so if you have worldly female friends giving you advice about relationships, you will be confused too.

Notice how Ruth did not follow her peers but rather followed Naomi:

And she said, ‘See, your sister-in-law has gone back to her people and to her gods; return after your sister-in-law.’ But Ruth said, ‘Do not urge me to leave you or to return from following you. For where you go I will go, and where you lodge I will lodge. Your people shall be my people, and your God my God.’” (Ruth 1:15-16)

And when Ruth was interested in Boaz, it was Naomi who gave her good advice on what to do next (Ruth 3:1-5). But notice what Ruth said back to Naomi, “All that you say I will do.” Ruth was humble enough to take wise counsel. Modern women get caught in their echo chambers, listening to other modern women. But notice the call for women to look back at the holy women in the past:

For this is the way the holy women of the past who put their hope in God used to adorn themselves. They submitted themselves to their own husbands, like Sarah, who obeyed Abraham and called him her lord. You are her daughters if you do what is right and do not give way to fear.” (1 Peter 3:5-6, NIV).”

If you want a modern man who is confused about his biblical calling as a man, then listen to other modern women. But if you want to be in a relationship with a godly man who is seeking to obey God’s word, then find yourself a good teacher and listen like Ruth did.

3. Be Proactive Without Emasculating the Man

When Ruth desired Boaz, Naomi gave her a plan on how to be proactive (Ruth 3:1-5) but then she gave her wisdom about not doing too much either (Ruth 3:18). First she said, “Then go and uncover his feet and lie down, and he will tell you what to do,” (Ruth 3:4) Notice the balance here. Ruth did something but she also then respected Boaz’s role to lead.

After Ruth came home and told Naomi how great it went with Boaz, Naomi continued to give Ruth a plan that was proactive but that still did not emasculate Boaz. She said, “Wait, my daughter, until you learn how the matter turns out, for the man will not rest but will settle the matter today,” (Ruth 3:18).

She said “go” but she also said “wait.” Modern women struggle to combine these two approaches. They often either sit still and quiet while the man never knows if she likes him, or they rush ahead and to too much, emasculating the man in the process by stealing the male role of pursuer from the man.

Ruth gets a lot of attention for what she did in Ruth 3, but when you read Ruth 4, it was Boaz who really took the lead. A godly woman should invite a man to pursue, but she must then let the man pursue and not try to force her will. Notice how Ruth 4:13 phrases their union, “So Boaz took Ruth, and she became his wife.”

If you want to be like Ruth, be very careful who you are modeling your womanhood after. Like the holy women in the past, learn to be inviting and proactive towards a man without taking on the masculine role in relationships. Let men be men.

As a Christian woman, do you know how to spot your Boaz? Here’s an article where I cover that topic, 3 Signs God Is Revealing Your Boaz to You.