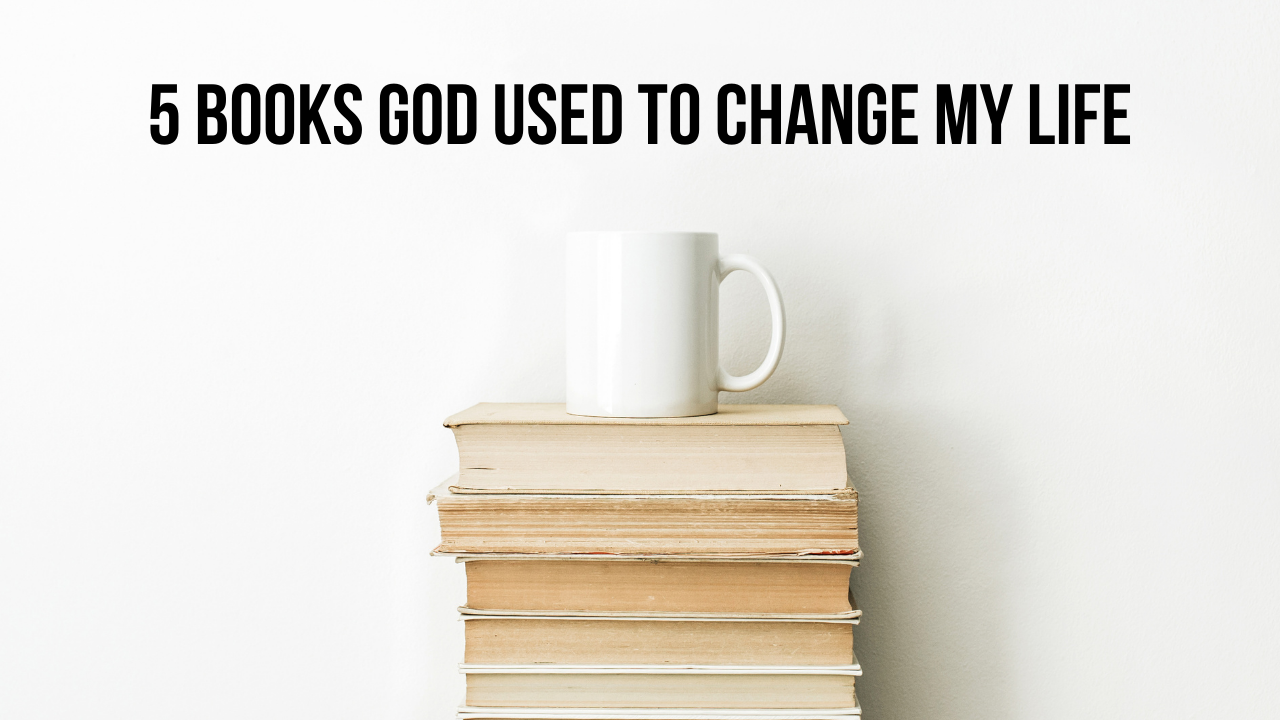 In this article, I’m going to talk about 5 books that God used to change my life. I’m not saying that these books will change your life; for a book to change your life, you have to be in a certain season of life with certain needs that match the topic of that book. I also won’t be listing these books by importance but rather by the order in which I read them.

1. Wild at Heart, by John Eldredge

When I was three my parents got divorced. Even though I didn’t live with my dad, he was still extremely involved in my life so we were very close. But when I was 10 my dad had a massive stroke which caused severe brain damage and limited the use of the left side of his body.

As I entered my teenage years, my parents’ divorce and my dad’s stroke weighed really heavy on my heart. I felt really alone and confused and so I started to drift from God, I started partying, and I was living a rebellious life.

Thankfully when I was a junior in high school the Lord led my uncle to give me this book, Wild at Heart. I was not much of a reader at that point in my life but once I realized this book had a lot of answers to the questions I had about becoming a man and that God is actually the one really fathering me, I read the whole thing in three days.

So this book was used by God to help bring healing to what John Eldredge calls your “father wound.” This book is written to men and it really focuses on how our relationships with our dads shape us for good and bad. But this book was so powerful in my life because it taught me that only my Father in heaven can validate me as a man in the way my heart needs.

My wife was also greatly benefited by the book called Captivating, which was written by John and his wife, Staci Eldredge. It talks about similar themes but is directed towards women.

So if these are themes you are dealing with right now, these books my really help you too.

2. The Practice of the Presence of God, by Brother Lawrence

After I graduated high school I took a year off before going to college and I went on a mission’s trip for seven months in Liberia, West Africa with the organization called Mercy Ships. At this point in my life, I had repented and turned back to God but I knew I wasn’t following him with the level of passion that I really wanted to.

So going on that mission’s trip was really my attempt to dedicate my life completely to God and follow him wholeheartedly. Thankfully while on this trip and while living in Liberia, the Lord led me to read this little book by Brother Lawrence.

Brother Lawrence was a simple monk who worked in the kitchen at a monastery. But he dedicated his life to be in constant communion with God. While his fellow brothers set aside specific times to pray, Brother Lawrence made it his goal to always be praying internally as he sought constant connection with Christ. This book is a collection of letters he wrote to people where he described his prayer life.

God used this book in my life to help teach me about what prayer really is, which is not just moments of connecting with God but rather a constant connection with Christ where we seek to live in God’s presence moment to moment.

If you want to grow your relationship with God, this book can really help.

God used this book in my life almost like a gateway drug. This book really opened my eyes to the written works of Lewis. Mere Christianity taught me a lot about how Christianity differs from other religions and why it is so much better.

This book was so important in my life not only because it taught be so much about the basics of Christianity but also because it taught me that writing truth can also be beautiful. Throughout the book Lewis teaches through helpful little metaphors and pithy little lines that are easy to understand and remember. Lewis is extremely quotable. I love how Lewis explains truth but he does it in a beautiful and artistic way.

Most of you know me as a YouTuber, but I like to consider myself as a writer first and God really used Mere Christianity to ignite that “writing spark” within me.

The first book I read by John Piper was called Don’t Waste Your Life. That book was really important too because it taught me that the purpose of life is to glorify God. I read that book when I was serving on Mercy Ships so it was very timely at that point in my life.

A few years later, however, I was helping at my local church in the small groups ministry and a guy there wanted to do a church wide study by John Piper. At that point I didn’t connect the dots that this was the same John Piper that wrote Don’t Waste Your Life. This guy from church told me I had to read this book called Desiring God and that this book would totally change my life.

The key line in this book is “God is most glorified in us when we are most satisfied in him.” This book taught me that God wants us to pursue maximum joy in him because that brings maximum glory to him.

This was a big paradigm shifting book for me and if you’ve never read it I highly recommend you do.

5. Preaching the Whole Bible as Christian Scripture, by Graeme Goldsworthy

After getting really involved at a local church here in Cleveland, Ohio, I felt called to enter seminary and become a pastor. When I was taking my preaching class, this book was one of the required readings.

This book was so life changing because it opened my eyes to the reality that the entire Bible is actually pointing to Jesus Christ. It taught me about typology and how to rightly see how all Scripture ultimately points to Jesus.

Even if you are not intending to preach or be a Bible teacher, this book can help you see how the whole Bible is directing us to Jesus Christ.